Please welcome Michael McClung to The Qwillery. The Thief Who Wasn't There (Amra Thetys 4) was published on November 15, 2016 by Ragnarok Publications. 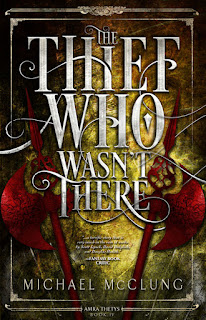 Sometimes an idea for a novel (seemingly, at least) jumps out of a writer's brain fully-formed, like Athena springing from Zeus's forehead. Other times, it can start with a single image, as John Fowles's The French Lieutenant's Woman is said to have done:


John Fowles often found his storytelling skills inspired by mental images, scenes that evoke a sense of mystery and demand an explanation. In December 1966, he had one of these charged visions. “A woman stands at the end of a deserted quay and stares out to sea,” he later recalled. “This image rose in my mind one morning when I was still in bed half asleep.”

The creation of the Amra Thetys series bears more resemblance to Fowles's Sarah Woodruff than any Greek creation myth. I was sitting in my terrible motel room-turned apartment in Austin, Texas. It was 2001 or 2002, and I was trying to teach myself how to write fiction on an old Brother word processor. I don't remember if I was lying down or taking a shower or eating a sandwich over the sink (the apartment was small enough that I could almost have been doing all three at once), but I do remember that first image: A person standing high up in a broken tower, surveying a storm-lashed, deserted, ruined city. This person's back was to me, and at first I thought it was a young man (I knew somehow already that this person was a thief) Then I realized it was a woman who was not effeminate, either in looks or demeanor, and that she was starving.

From there the questions flowed – what was she doing there? If she was starving, why didn't she leave? What was she looking at? In time, all the questions led to answers which led to more questions, and soon enough I had a little fourteen thousand word novella, a couple of characters that I really enjoyed writing about, and the makings of a world that, while it wasn't very deep, was really quite broad. Soon enough after that, the novella had expanded into a novel (now titled The Thief Who Spat in Luck's Good Eye).

Now it's coming to the end of 2016, and there are four Amra Thetys books out there in the wild; people seem to like them okay, for the most part. The Thief Who Pulled on Trouble's Braids (first in the series, second written) won Mark Lawrence's SPFBO for 2015-2016, and Luck's Good Eye (then titled THAGOTH) was a Del Rey Digitial First Novel Competition winner in 2002.

Very little of the writing in the Amra Thetys series was ever done with a conscious eye toward the market, or trends. They're short books, for the fantasy genre – south of three hundred pages. They're first person point of view. They're much more sword & sorcery, and even noir/hardboiled detective, then they are epic fantasy, at least on the surface. They've even been accused of having steampunk elements.

None of these elements, needless to say, are calculated to give George R.R. Martin a run for his money. So why then, have they enjoyed the small but real success that they have? The author is probably the worst person to answer such a question, but I think that the appeal of the series is all in the characters.

The fact is, Amra and her companion Holgren aren't perfect people. Sure, they're smart and capable, and on balance you'd have to tip them into the bucket marked 'good guys' (though both would go screaming their protests, and try to claw their way out as soon as they landed). But what I like about them is their humanity – they both have parts, both physical and emotional, that have been broken, and have healed imperfectly, and it shows in their thoughts, their dialogue, their choices and actions. Paragons are widely admired, but seldom liked. Amra and Holgren are far from paragons.

I think that any fiction, be it written or filmed, has a much better chance of meaning something to readers if the characters who inhabit it are believable. That's why I've worked very hard to make sure that every character in the series – even the ones with walk-on parts – are constructed with something sturdier than cardboard. Many of them are pretty despicable, and at least a couple are definitely insane, but I made a point to try and make them interesting and believable.

My personal preference is for stories about people, rather than plot-driven tales. If you as a reader have the same taste, I hope you'll give the Amra Thetys series a try, and tell me what you thought. 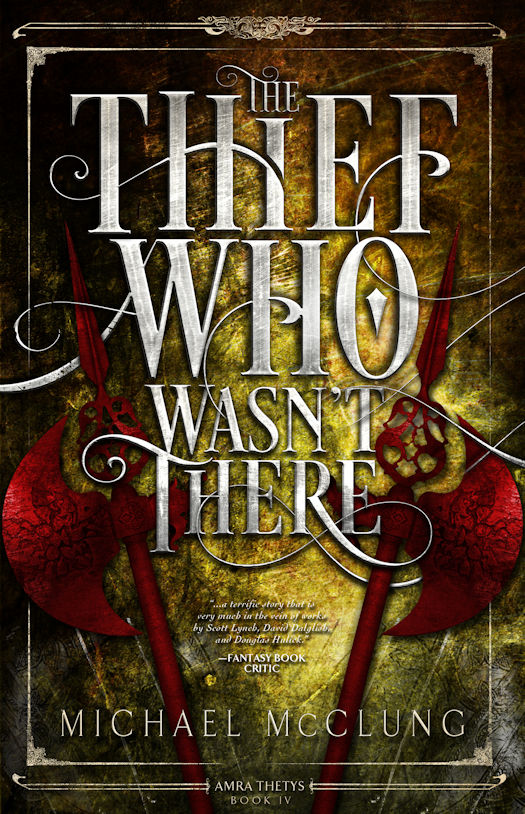 Bellarius, saved from utter destruction, is now plunged into vicious civil war. Amra has vanished, and while Holgren has a plan to find her and bring her back, his plan teeters between impossibility and insanity.

Before he can even implement it, Holgren will have to deal with three separate armies vying for control of Bellaria, all of which view him as either a threat, an inconvenience, or a potential tool.

Meanwhile, Holgren seeks to trap one of the monstrous rift-spawn — abominations born of the Telemarch's madness and power — and bend it to his will. Then, he intends to descend into the eleven hells to steal an ancient artifact of incredible power from the dire halls of the Black Library.

Oh, the things we do for love.

The Thief Who Wasn't There is the fourth volume in Michael McClung's Amra Thetys series.

Michael McClung was born and raised in Texas, but now kicks around Southeast Asia. He's been a soldier, a cook, a book store manager, and a bowling alley pin boy.

His first novel was published by Random House in 2003. He then self-published the first three books of the Amra Thetys series, the first being The Thief Who Pulled on Trouble's Braids, before signing them and the fourth book (The Thief Who Wasn't There) with Ragnarok. 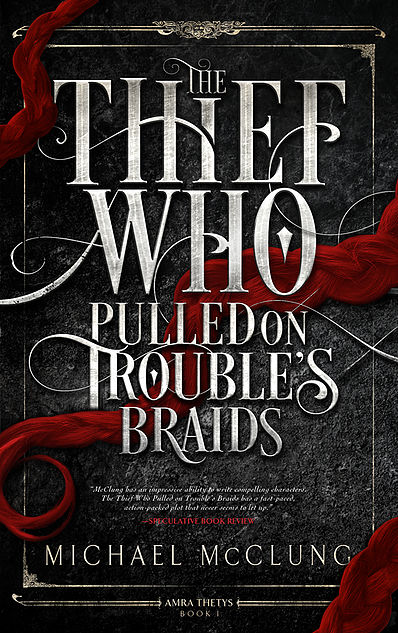 "They butchered Corbin right out in the street. That’s how it really started. He was a rogue and a thief, of course. But then, so am I. So when he got himself hacked up in front of his house off Silk Street, I decided somebody had to be made to pay. They thought that they could just sweep him away like rubbish. They were wrong."

Amra Thetys is a thief with morals: she won't steal from anybody poorer than she is; of course, anybody that poor generally doesn't have much worth stealing.

When a fellow thief and good friend is killed in a deal gone wrong, Amra turns her back on burglary and goes after something far more precious: revenge. Revenge, however, might be hard to come by. A nightmare assortment of enemies, including an immortal assassin and a mad sorcerer, believe Amra is in possession of The Blade That Whispers Hate—the legendary, powerful artifact her friend was murdered for—and they'll do anything to take it from her.

Trouble is, Amra hasn't got the least clue where the Blade might be. She needs to find the Blade, and soon, or she'll be joining her unfortunate friend in a cold grave rather than avenging his death, and time is running short for the small, scarred thief.

The Thief Who Pulled on Trouble's Braids is the first volume in Michael McClung's Amra Thetys series. 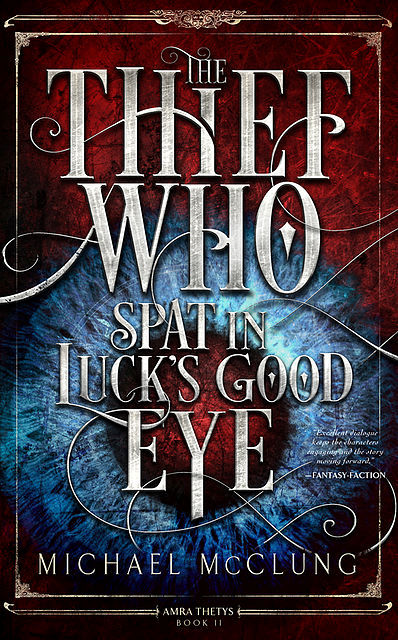 Amra Thetys is a thief with morals: she won't steal from anybody poorer than she is; of course, anybody that poor generally doesn't have much worth stealing.

Holgren is a mage with a distaste for magic and a soul bartered away to dark powers. Together, they embark on a quest for the fabled city of Thagoth, where the secret of immortality is rumored to be hidden.

Yet, Amra and Holgren aren’t the only ones after the secret. Many others seek to utilize the hidden magic for their own twisted ends. Waiting in the ruined city with dark plans for the world are the twin gods Tha-Agoth and Athagos, a brother and sister whose illicit passion is as destructive and vengeful as they are.

Now, as potent sorceries clash in a violent struggle for dominion over all that lives, Amra and Holgren face a choice between the unthinkable and the unbearable—with the fate of the world hanging in the balance.

The Thief Who Spat in Luck's Good Eye is the second volume in Michael McClung's Amra Thetys series. 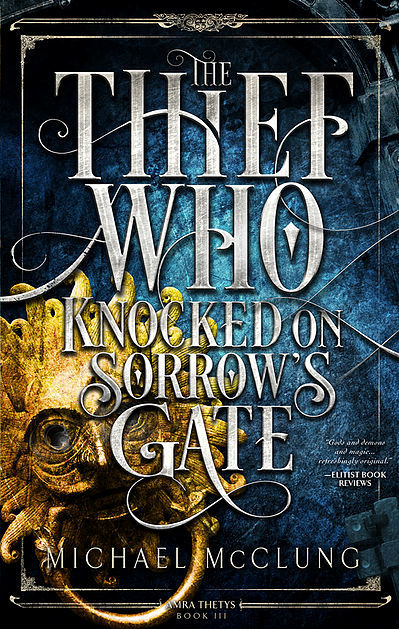 After surviving Thagoth and returning rich to Lucernis, Amra and Holgren have settled down to a very comfortable, if decidedly unexciting life—until the night Amra receives an old enemy's head in a box. A longstanding debt calls her back home to Bellarius, the scene of many childhood horrors she would much rather forget about.

Yet, as bad as memories of the past might be, present-day Bellarius is rapidly becoming worse, for the Eightfold Goddess has not forgotten about Amra, and another of Her Blades, the Knife that Parts the Night, has been discovered and threatens to tear the very fabric of reality apart.

All that stands in the way of utter destruction is one small, scarred thief and her mage companion.

The Thief Who Knocked on Sorrow's Gate is the third volume in Michael McClung's Amra Thetys series.