Review: Vassa in the Night by Sarah Porter 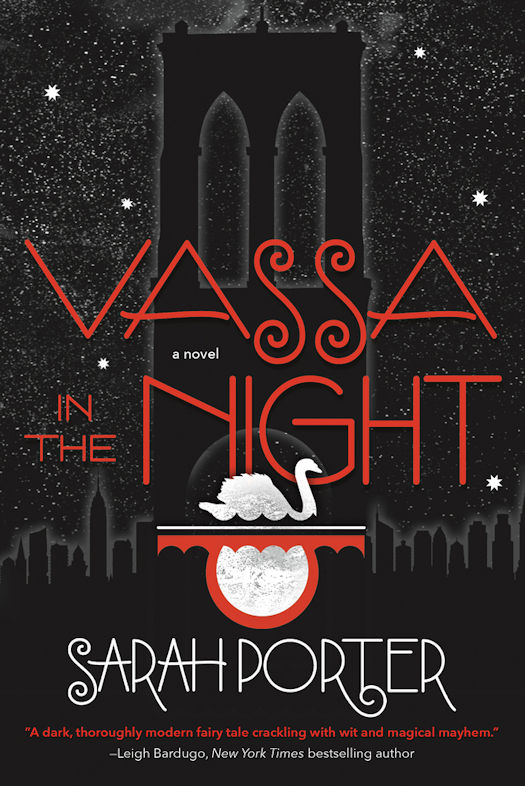 Vassa in the Night is a powerful and haunting modern retelling of the Russian folktale “Vassilissa the Beautiful” for teen fans of urban fantasy, fairy tales, magic, and horror who enjoy books by Leigh Bardugo, Kendare Blake, Catherynne Valente, and V. E. Schwab.

In the enchanted kingdom of Brooklyn, the fashionable people put on cute shoes, go to parties in warehouses, drink on rooftops at sunset, and tell themselves they’ve arrived. A whole lot of Brooklyn is like that now—but not Vassa’s working-class neighborhood.

In Vassa’s neighborhood, where she lives with her stepmother and bickering stepsisters, one might stumble onto magic, but stumbling out again could become an issue. Babs Yagg, the owner of the local convenience store, has a policy of beheading shoplifters—and sometimes innocent shoppers as well. So when Vassa’s stepsister sends her out for light bulbs in the middle of night, she knows it could easily become a suicide mission.

But Vassa has a bit of luck hidden in her pocket, a gift from her dead mother. Erg is a tough-talking wooden doll with sticky fingers, a bottomless stomach, and a ferocious cunning. With Erg’s help, Vassa just might be able to break the witch’s curse and free her Brooklyn neighborhood. But Babs won’t be playing fair....

Vassa In the Night by Sarah Porter, set in a mostly sunless Brooklyn, New York, toes the line between Magical Realism and Urban Fantasy. A retelling of the Russian folktale “Vasilissa the Beautiful,” this is a dark, offbeat, and enchantingly sophisticated Young Adult novel. It is also a showcase for Porter’s considerable talent for wrapping fantastical setting and realistic emotion with intimately plaited threads of lovely, empathetic description.

Vassa is sixteen and living in a familiar-sounding fairytale existence with a stepmother and two stepsisters. Her mother and father are absent from her life for different reasons, and although her situation isn't as abusive as some classic fairytales, Vassa presents as adrift and alone. Her only real confidante is a chatty, magical, wooden doll named Erg who is full of mischief, prone to swiping things, and a lover of junk food. Carrying Erg in her pocket, Vassa keeps her a secret from her family and the world, always taking the blame for Erg’s sticky fingers.

Lately night has been falling hard over Brooklyn, keeping the city in darkness longer and longer and leaving the population dependent on BY’s, the one convenience store that's open on the overnight. BY’s is no ordinary mini-mart. Run by tough, old broad, Babs Yagg, the store is lifted high off the ground on dancing chicken feet, rotating at a good clip until you sing the store’s TV commercial jingle and the building lowers to the ground to let you in. The parking lot is patrolled by a silent watchman in black leather on a motorcycle, and is ringed by tall stakes bearing the heads of shoplifters past. Babs takes loss prevention personally, to the extreme.

One night, Vassa and Erg make a trip to BY’s for light bulbs, and the story begins in earnest. Wrongly accused of shoplifting, Vassa’s life is spared by Babs but she's sentenced to three days of employment where she's assigned nearly impossible tasks, knowing that beheading is the ultimate price for her failure. Before the three days are up, Vassa must puzzle out what Babs is up to with her chain of BY’s stores, discover her own true nature, and perhaps most difficult of all, keep her head off the last empty pike in the parking lot.

Vassa and Erg are both vivid, relatable characters. Vassa comes across as bright and reservedly caring, but closed off from the world as a result of her painful childhood. Her self-doubts are hard-earned, but she's not one to waste much time on self-pity. Erg is one of those characters that I’ll – if you’ll forgive the pun – carry with me for a long time. Deliciously sarcastic and cryptic, Erg tells it like it is if you’re patient enough to really listen. For a pocket sized doll, she has a supernatural knack for getting Vassa and herself both into and out of trouble. But even a magic doll has her limits.

Other characters, both human and enchanted, are mostly well rounded, but Porter is particularly deft with her array of charming and loathsome non-humans.

Although classified as Young Adult, Vassa in the Night is not a lighthearted romp. This is not an easy hero’s journey with obvious solutions, and there is a fair amount of peril and gore. Think Alice’s Adventures in Wonderland with a more sinister tone and a heroine only slightly more world-weary than Carroll’s young Alice. That said, in spite of the dark subject matter, the tale is beautifully told. After a few chapters, I started marking favorite passages with sticky flags, and my copy of the book has an impressive frill of color all along the text block.

Even if you don't normally read Young Adult, don't pass up this wonderfully complex and pleasantly weird tale. I would recommend this book to those with a fondness for strong heroines, dark whimsy, and challenging themes. I don't give out five stars (out of 5) lightly, but I loved Vassa in the Night, and I am so excited to see what Sarah Porter will do next.