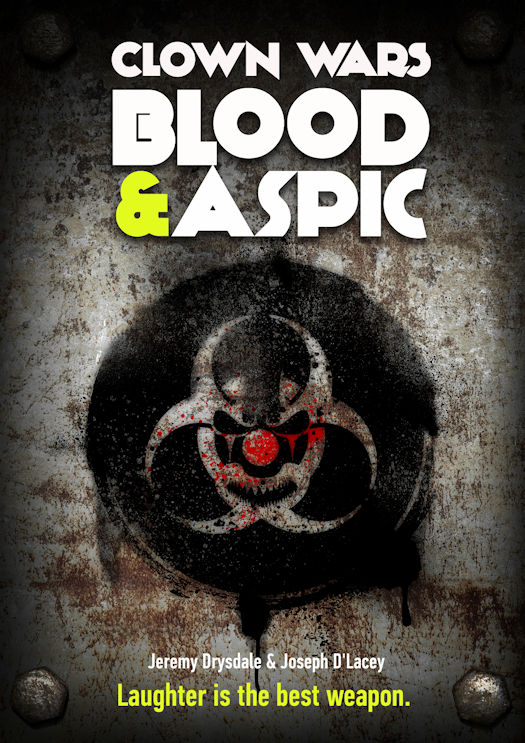 For as long as anyone can remember, the Clowns and Humans of Blueville have co-existed peacefully. Sure, each species thinks the other is a little weird but that's never been something to fight about.

Until, that is, a series of freakish terrorist attacks - seemingly perpetrated by clowns - turn the two bloodlines against each other. When war breaks out, the future of both species hangs in the balance. It's going to take a suicide mission to stop the carnage and only misfit circus trainee Colin Clarke and his three best friends have the courage to volunteer for this impossible task.

Their quest takes them to the mean streets of Cheadle, the most dangerous city in the world. There, in a final bid to defeat their true enemy, they must confront the darkness lurking at the very heart of clownkind.

"Jeremy Drysdale writes with razor-blade precision: You'll laugh, you'll squirm, and you won't be able to stop turning the pages." Will Hill, author of the Department 19 series.

Life is practically perfect in BlueVille: the sun shines every day, the citizens are unusually cheerful, and crime is a rarity. Although its inhabitants come from two very different cultures, Normals and Clowns, they have lived in harmony for as long as people can remember. Naturally, the happy little town is stunned when a series of lesser crimes culminates in a gory mass murder at St. Saintly's hospital and the evidence implicates Clowns. A second horrific attack on the innocent population of BlueVille increases racial tensions, exactly as Aspic, the leader of the anti-clown army, intended. The Normals, desperate to end the bloodshed, accept Aspic's aid in ridding BlueVille of the Clown population. And so begins the Clown Wars.

Clown Wars: Blood and Aspic is a dark, yet humorous tale that will appeal to lovers of the horror genre. I quite enjoy the idea of clowns gone bad and the unique horrors that they might inflict on a unsuspecting world. With the exception of Grout, whose speech impediment makes it difficult at times to decipher his dialogue, I feel the antics of the "Crooked Noses" shine brightest. For instance, Fluster, Aspic's Lieutenant, is undoubtedly malicious and evil, but there is something about his compulsive neatness and disdain for his cohorts that I find oddly endearing. Aspic, in all his diabolical glory, positively oozes hatred and vindictiveness. His actions are thoroughly repugnant and yet I couldn't help but chuckle at his shocking unpredictability; especially as he launches a genetically engineered kitten onto an unsuspecting victim or severs a tongue from a foolishly talkative minion.

The heroes, Kaboom, Mojo, Stitches and Colin, find themselves on a journey in search of a weapon that has the power to defeat the anti-clown army. These four young misfits are earnest in their quest, but slightly dull in comparison to the antagonists. Colin and Kaboom stand out and show significant development as the story progresses. I enjoyed their coming of age adventures outside the boundaries of Blueville.

Not being an aficionado of clowns, I was both intrigued and confused while reading this story. Although coauthors Drysdale and D'Lacey thoroughly explain the Clown bloodlines and their characteristics, I had some difficulty remembering them and reread their descriptions often. I had no trouble, however, in identifying the significance of a tyrant who begins with segregation but intends to wipe one segment of the populace from the face of the earth, and the parallels it shares with our own history.

The current trend of creepy clown sightings makes book one of this new series even more appealing. I would definitely recommend Clown Wars: Blood and Aspic to readers who enjoy a dose of humor with their horror. Let me close with this final thought: Imagine Pleasantville meets Ash vs Evil Dead, but with clowns; now that's a pretty wild ride.