Reviews: The Mapmaker's War and The Chronicle of Secret Riven by Ronlyn Domingue and Giveaway - April 21, 2014


As you can see from my reviews  I would highly recommend the 1st and 2nd novels in the Keeper Tales Trilogy. Thanks to the generosity of Atria Books you can enter to win the books below. 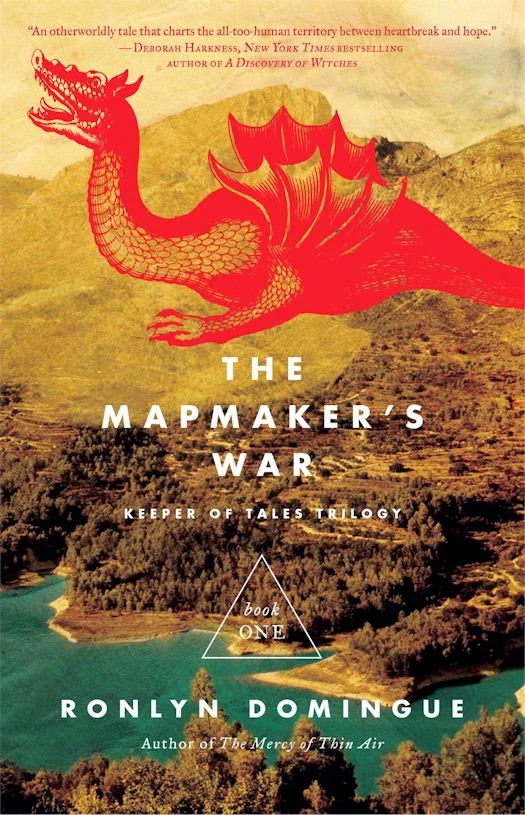 In an ancient time, in a faraway land, a young woman named Aoife is allowed a rare apprenticeship to become her kingdom’s mapmaker, tasked with charting the entire domain. Traveling beyond its borders, she finds a secretive people who live in peace, among great wealth. They claim to protect a mythic treasure, one connected to the creation of the world. When Aoife reports their existence to her kingdom, the community is targeted as a threat. Aoife is exiled for treason and finds refuge among the very people who had been declared her enemy. With them, she begins a new life surrounded by kindness, equality, and cooperation. But within herself, Aoife has no peace. She cannot share the grief she feels for the home and children she left behind, nor can she bear the warrior scars of the man she comes to love. And when she gives birth to their gifted daughter, Aoife cannot avoid what the child forces her to confront about her past and its truth. On this most important of journeys, there is no map to guide her.

I have not read a novel written in the 2nd person until The Mapmaker’s War by Ronlyn Domingue. At first it was odd but I quickly got into the rhythm of the novel and enjoyed myself immensely. I was swept up in the wonderful story of Aoife. I felt as if I was visiting each place that Aoife sees and feeling what Aoife feels.

Aoife is a female who does not want to do what is expected (grow up to marry well, have children), but becomes a mapmaker for the King. She is well-skilled and smart. She makes her own choices as best she can in the confines of her society and often defies that society. Aoife is a very strong woman but is not perfect. She struggles with her shortcomings and with the expectations of others and society.  While mapping for the King she finds the Guardians across a river from the King's land. After her visit to a Guardian village she became intrigued by them and their society which is so different than her own.  While fantastical things happen throughout the novel, after Aoife is exiled and goes to live with the Guardians the story takes a more mythic turn as the full wonders of the Guardian society is revealed.

The Mapmaker's War deals with issues of love, betrayal, societal and national expectations through the eyes of Aoife and through her interactions with the well-fleshed out secondary characters. The world-building is exceptional. Domingue creates a full and engaging mythology as the basis of Guardian society.

Domingue’s writing is lyrical and beautiful. The Mapmaker’s War is an immersive and riveting reading experience and a wonderful fantasy. 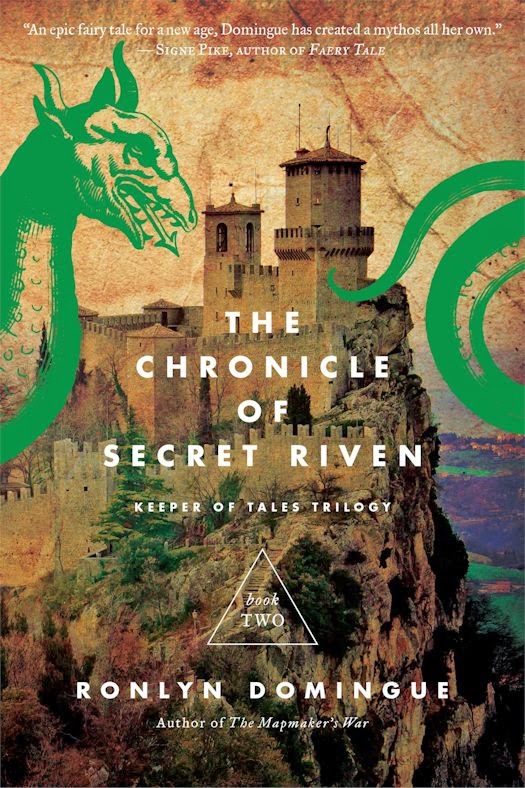 An uncanny child born to brilliant parents, befriended by a prince, mentored by a wise woman, pursued by a powerful man, Secret Riven has no idea what destiny will demand of her or the courage she must have to confront it in the breathtakingly epic, genre-spanning sequel to The Mapmaker’s War.

One thousand years after a great conflict known as The Mapmaker’s War, a daughter is born to an ambitious historian and a gifted translator. Secret Riven doesn’t speak until her seventh year but can mysteriously communicate with plants and animals. Unsettled by visions and dreams since childhood, she tries to hide her strangeness, especially from her mercurial father and cold mother. Yet gentle, watchful Secret finds acceptance from Prince Nikolas, her best friend, and Old Woman, who lives in the distant woods.

When Secret is twelve, her mother receives an arcane manuscript to translate from an anonymous owner. Zavet suffers from nightmares and withdraws into herself. Secret sickens with a fever and awakens able to speak an ancient language, one her mother knows as well. Suddenly, Zavet dies. The manuscript is missing, but a cipher has been left for Secret to find.

Years later, Secret becomes a translator’s apprentice for Fewmany, an influential magnate, who has taken an interest in her for reasons she cannot discern. Before Secret learns why, Old Woman confronts Secret with the truth of her destiny—a choice she must make that is tied to an ancient past.

Overflowing with spellbinding storytelling, vivid characters, and set in a fascinating world, The Chronicle of Secret Riven explores the tension between love and hate, trust and betrayal, fate and free will.

The Chronicle of Secret Riven is the second novel in the Keeper of the Tale Trilogy. It is not written in the 2nd person POV as The Mapmaker's War, but the 3rd person. The story takes place 1000 years after the events in the first novel in the series.

Secret Riven is a fascinating character. She is the daughter of Zavet (who has the ability to translate all languages) and Bren Riven who is intelligent and ambitious. Zavet is a strange woman in many ways and Secret has an unusual though somewhat unpleasant home life. Secret is another strong female. Again she is not without her flaws. One thousand years on women have more choices, can go to school and high academies and work. Secret still seems to be a bit ahead of her society and wants to take more advanced and harder classes as she gets older and make her own path in the world. She is an excellent student. She also has some special abilities in that she can communicate with animals and plants despite not speaking for the first 7 years of her life. She comes to have a wonderful friend in Prince Nikolas who will one day be King.

The Chronicle of Secret Riven spans Secret's life from when she is small to when she is 18 (or 19).  Aside from the day to day or Secret's life so much happens in the novel that is the stuff of fairy tales. It overlays everything in the novel and permeates everything that happens. Domingue's storytelling and world building is exceptional. The lyrical quality to her writing is once again present as she spins the fantastic and deeply engaging story of Secret Riven. The novel leaves us wondering what Secret will do: face her destiny or deny it.

The first and second novels in the Keeper of Tales Trilogy are so incredibly different from each other but fit so well together. I can not wait to see what happens in the 3rd novel and where Ms. Domingue will take us.


Note:  In a recent interview Ms. Domingue stated that you can read the first two novels in the Keeper of Tales Trilogy in either order. I would have to agree. I did read them in order and saw some tantalizing hints about the first novel in the second, but nothing that detracted from the second novel. In fact, it might be fun to read them in the reverse order.

There is a terrific Appendix (one of two) in The Chronicle of Secret Riven that includes some of the Myths that form the Guardian mythology.

What:  Three entrants will each win a copy of The Mapmaker's War (Keeper of Tales Trilogy 1) by Ronlyn Domingue from Atria Books. US ONLY

What:  Three entrants will each win a copy of The Chronicle of Secret Riven (Keeper of Tales Trilogy 2) by Ronlyn Domingue from Atria Books. US ONLY

Who and When:  The giveaways are open to all humans on the planet earth with a US mailing address. Giveaways end at 11:59PM US Eastern Time on April 29, 2014. Void where prohibited by law. No purchase necessary. You must be 18 years old or older to enter