Please welcome Robin Riopelle to The Qwillery as part of the 2014 Debut Author Challenge Interviews. 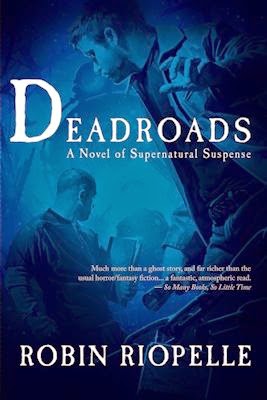 Robin:  Hi – thanks again for having me.

Always. In the crib, I think. Although I’ve had a really interesting series of creative careers [see earlier blog post, maybe a link?], I always had to write. During lunch hours, after the kids were asleep, I wrote. Writing feeds a different part of my soul. About five years ago, I decided I was going to push myself further and start submitting things. I didn’t want to have any regrets about roads not taken.

Robin:  Oh, I am a plotter. I am clearly a chronic, over-the-top plotter of epic proportions. Because I’m also an illustrator, my outlines often look like annotated drawings. If people are amazed at how quickly I can turn out words, it’s because I spend stupid amounts of time working the outline.

Robin:  Giving myself permission to take the time to do it. So much else seems to crowd in and will eat my attention if I’m not vigilant and determined.

Robin:  Classic loner gets over it.

What? Something more? Oh, okay.

Sol Sarrazin lays ghosts to rest, but after his father is murdered, he must face down demons to save his estranged family.

TQ:  What inspired you to write Deadroads? Why did you write a novel of ‘Supernatural Suspense.’ Are there any other genres or sub-genres in which you’d like to write?

Robin:  I’ve always liked a good ghost story. Ghosts work well as a metaphor for unfinished business, for past mistakes, for things that we try to ignore that keep coming back. It’s difficult to pin down what Deadroads actually is, genre-wise: part thriller, part family drama, part horror. Character-driven supernatural suspense is as close as I can come.

Fractured families interest me. Separation, reunion – as an adopted person, these are the ideas that I want to take apart, examine, and put through their paces. A natural extension of this idea is le grand dérangement – the historical expulsion of Acadians from maritime Canada – which tore families apart, with some ending in the swamps of Louisiana, where Deadroads begins.

Other genres? I’m partial to all sorts of fantasy, and I definitely would like to write something set in an alternate history. Really well-written creative non-fiction appeals to me, too. I’d love to research the hell out of a topic and write something accessible about it. Like writers Erik Larson (The Devil in the White City) or John Vaillant (The Golden Spruce).

TQ:  What sort of research did you do for Deadroads?

Robin:  For Deadroads, I had a research vector: Cajun and Acadian history and culture; the lure of “The West”; and paramedicine. I live in Ottawa, where I use French a lot. I talked to francophone friends about language and culture; I read a lot. I listened to Quebecois, Cajun and Acadian music almost non-stop, though that never was and never will be a chore. As for The West – well, Jack Kerouac came in handy. Because my character Sol is a paramedic, I pestered my EMT friends about what they loved and hated about their jobs. And due to a hiking accident and subsequent 2-hour ambulance ride, I had a rambling, drug-fueled conversation with a very nice paramedic about the entire contents of her rig, the injuries that still make her queasy, and the difficulties of maintaining a love life.

Robin:  Sol Sarrazin screws up so royally, and is so flawed, that he’s a joy to write. Sol witholds: his love, his tongue, his approval, his temper…until he doesn’t. As a writer, I tend to hold back myself, let the reader fill in the blanks, so maybe that’s why he resonated with me.

Writing his sister Lutie wasn’t difficult so much as harrowing. Lurking under her poise and her seemingly cold indifference is a monumental hurt. She masks it by straight-arming anyone who comes close to her. When I felt her warming up to Baz, this long-lost brother who is happy as a balloon at a kid’s party, it was painful, the return of sensation, like pins and needles. She’s a hard person to like, and writing her self-imposed distance made me ache.

TQ:  Without giving anything away, what is/are your favorite scene(s) in Deadroads?

Robin:  When Sol figures out that the stranger he assumed his brother Baz’s date is actually their sister, Lutie. You could describe Sol as beleaguered and harried, at the best of times. He’s juggling about twelve things at once: lying to his girlfriend, dealing with his dead father’s ghost, trying to keep Baz safe, and then there’s this chippy girl who’s giving him grief. He more or less throws her out from Baz’s motel room. But when the penny finally drops, when he understands the enormity of what’s going on, and how he’s going to have to face it—it’s a whole new level of harried. I knew, as Sol knows, that he’s going to have to tackle all this emotional crap he’s swept under the rug. It’s delicious.

TQ:  Give us one or two of your favorite lines from Deadroads.

Robin:  Sol, in response to his paramedic partner Wayne’s assertion that the best part of the job is the thank-you sex, before recapping Sol’s daring rescue of an injured construction worker:

“Bon,” said Sol, nodding. “That’s why I do it. So I can see your little face light up like that.” He grimaced. “Not for the thank-you sex. Jesus.”

I like this line because Sol is not generally funny. He had to take on a lot of responsibility on at an early age, and it made him serious and solemn. I really like the relationship he has with Wayne, how Sol’s easier around him, doesn’t put up as many fronts. It also reveals that while Sol will joke around with the EMT crews, he’s serious about his relationship with his girlfriend. He’s a decent guy, at the core.

I also love listening to my completely bilingual friends, how they slip in and out of two languages in the same sentence.

Robin:  There’s more to the story I start in Deadroads. I based the story on an old French folksong: Les trois hommes noirs. There’s three of those devils, right? So I’ve been writing the sequel. 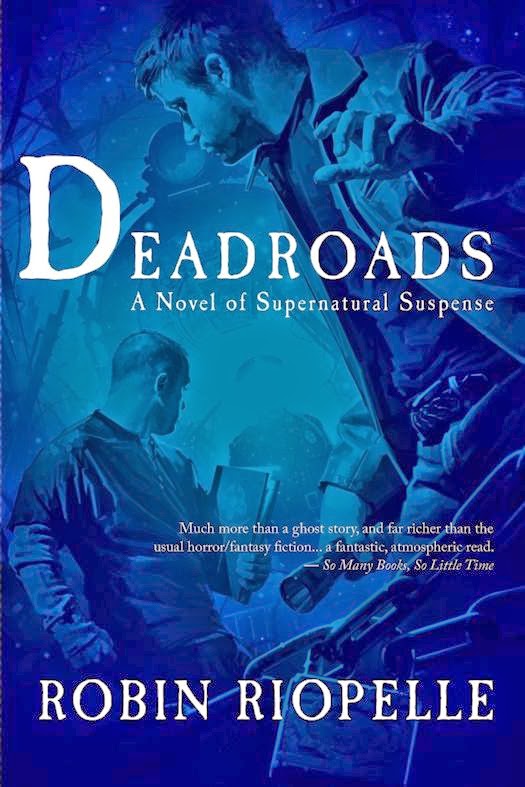 Lutie always wanted a pet ghost-but the devil's in the details.

The Sarrazins have always stood apart from the rest of their Bayou-born neighbors. Almost as far as they prefer to stand from each other. Blessed-or cursed-with the uncanny ability to see beyond the spectral plane, Aurie has raised his children, Sol, Baz, and Lutie, in the tradition of the traiteur, finding wayward spirits and using his special gift to release them along Deadroads into the afterworld. The family, however, fractured by their clashing egos, drifted apart, scattered high and low across the continent.

But tragedy serves to bring them together. When Aurie, while investigating a series of ghastly (and ghostly) murders, is himself killed by a devil, Sol, EMT by day and traiteur by night, Baz, a traveling musician with a truly spiritual voice, and Lutie, combating her eerie visions with antipsychotics, are thrown headlong into a world of gory sprites, brilliant angels, and nefarious demons-small potatoes compared to reconciling their familial differences.

From the Louisiana swamps to the snowfields of the north and everywhere in between, Deadroads summons you onto a mysterious trail of paranormal proportions. 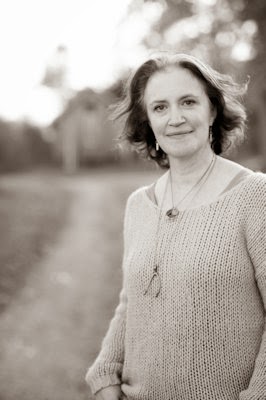 Robin Riopelle lives on the border between French and English Canada with her criminologist husband, two seemingly adorable kids, and an obstreperous spaniel. In addition to writing for museums and magazines, Riopelle also illustrates children’s books. Deadroads is her first novel.