Please welcome Melissa Bourbon to The Qwillery as part of the A Killing Notion Virtual Book Tour. 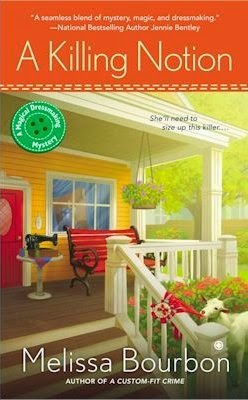 TQ:  Welcome back to The Qwillery. You've written five novels in your Magical Dressmaking Mystery series. What is the most challenging thing for you about writing?

Melissa:  Thank you for having me back! I’m so busy with my day job that for me, the hardest part of writing is actually finding chunks of time to focus on the story, and finding the creativity at the same time. By the end of the day, I’m often so tired or brain-dead from work that there isn’t a lick of creativity left. But once I have the draft written, revision is a wonderful thing!

TQ:  Are you a plotter, panster or hybrid plotster?

Melissa:  Definitely hybrid. I have an outline of what’s going to happen, but then as I write, so much happens organically… things I never would have been able to think up in a plotting session.

TQ:  Your most recent novel is A Killing Notion (A Magical Dressmaking Mystery 5). What inspired you to write mysteries with paranormal/supernatural elements?

Melissa:  I’ve always loved mysteries. I started with Nancy Drew, read all the Agatha Christie books in high school and college, and ventured far and wide from there. When I knew I wanted to write, it was a natural fit to work the story and characters around a mystery. My books are very character driven, even within the mystery genre. The mystery grounds things and is a great tool for exploring my series protagonists, which is what I love most.

TQ:  Do you base your paranormal/supernatural elements on existing lore, make things up or both?

Melissa:  The paranormal elements in A Magical Dressmaking mystery series are very light. Meemaw is a ghost who, due to a wish bestowed on the women in the Cassidy clan, are charmed, hangs around in the afterlife. Each of the women in the family has a magical gift. The basis for these gifts is from my imagination. The inspiration was a real fountain in Argentina that I discovered during my research of Butch Cassidy (Harlow is a descendant of his). So while the paranormal elements are pretty standard, the reason behind them is original to the story and informs how everything plays out in Harlow’s life.

TQ:  Tell us something about A Killing Notion that is not in the book description.

Melissa:  Homecoming mums in Texas are really big… and big business! I never knew that until we moved to Texas 6 years ago. When I learned about the tradition, I knew I’d work them into a book one day… and here they are!

TQ:  In A Killing Notion who was the easiest character to write and why? The hardest and why?

Melissa:  Thelma Louise, the goat, doesn’t have a huge role, but she’s a ton of fun to write because she’s always getting into trouble (see the homecoming mums above ;). I think Gavin’s a little bit harder to write because he needs to be a source of conflict for Harlow. To make that natural and not contrived can be challenging.

TQ:  Which character in the Magical Dressmaking Mystery series has surprised you the most?

Melissa:  Meemaw! I love her, and I have to rein her in so she doesn’t become too great a presence. If she was too present, I think it would be too heavy-handed and would be a negative. But she’s fun to write and sometimes her antics surprise me.

Melissa:  I’ve currently working on revisions for book 6 in A Magical Dressmaking mystery series, A Seamless Murder. After that, I’ll be plotting the next several in the series, and trying my hand at a women’s fiction. Always busy!

Melissa:  Thank you for having me! 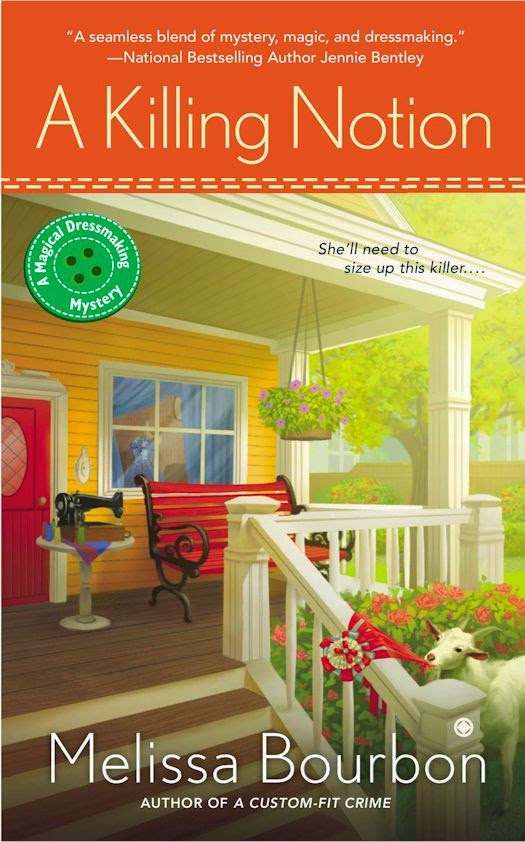 Harlow Jane Cassidy is swamped with homecoming couture requests. If only she didn’t have to help solve a murder, she might get the gowns off the dress forms....

Harlow is doing everything she can to expand her dressmaking business, Buttons & Bows—without letting clients know about her secret charm. When she has a chance to create homecoming dresses with a local charity and handmade mums for several high school girls—including Gracie, whose father, Will, has mended Harlow’s heart—she is ready to use her magical talents for a great cause.

But when Gracie’s date for the dance is accused of murder, Harlow knows things won’t be back on course until she helps Gracie clear the football player’s name. If Harlow can’t patch up this mess before the big game, her business and her love life might be permanently benched. 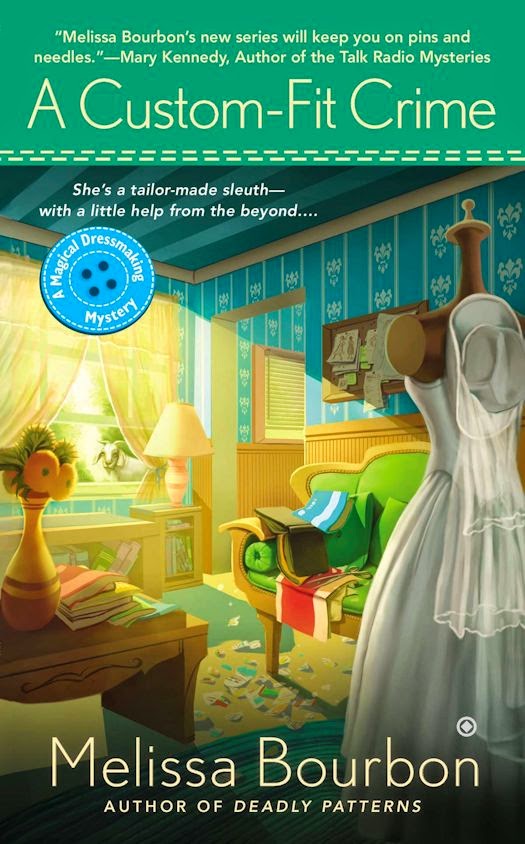 After a year of hard work in her Texas hometown, Harlow Jane Cassidy’s dreams are finally within reach—if she can just get it all done in time…

Harlow’s designs will be featured in a big magazine spread, but she only has a few days to finalize her collection. Plus she’s busy helping to plan her mother’s upcoming wedding, playing host to her old friend Orphie, and avoiding a competitive Dallas designer set on stealing Harlow’s ideas. Harlow’s making it all work—until someone breaks into Buttons & Bows and the rival designer is found dead.

But when a near miss makes it clear that Orphie could be the next victim, Harlow will have to untangle the threads of evidence if she wants to save her friend, her mother’s wedding, and her business from becoming fashion road kill… 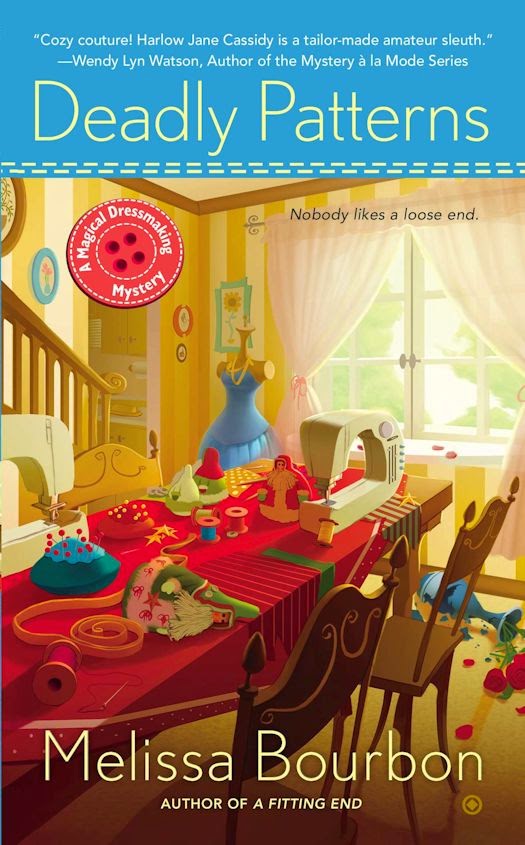 Bliss, Texas, is gearing up for its annual Winter Wonderland festival, but when a mysterious Scrooge ends the merriment with murder, it’ll take more than a ghost from Christmas past to set things right.

Designing a holiday fashion show set in the town’s most prominent historic mansion seems like a job tailor made for dressmaker Harlow Jane Cassidy. But with the mansion’s restoration still in progress and threatening weather on the horizon, she’s feeling on pins and needles more than reveling in holiday cheer.

Having volunteered to play Santa in this year’s festival, Dan Lee Chrisson was ready to move on after his divorce—until Bliss became his final resting place. Discovering his body puts Harlow at the scene of the crime. She’ll need plenty of help from friends and even her late great-grandmother’s spirited sleuthing if she’s to have a ghost of a chance of catching a killer who’s just jumped to the top of the naughty list…. 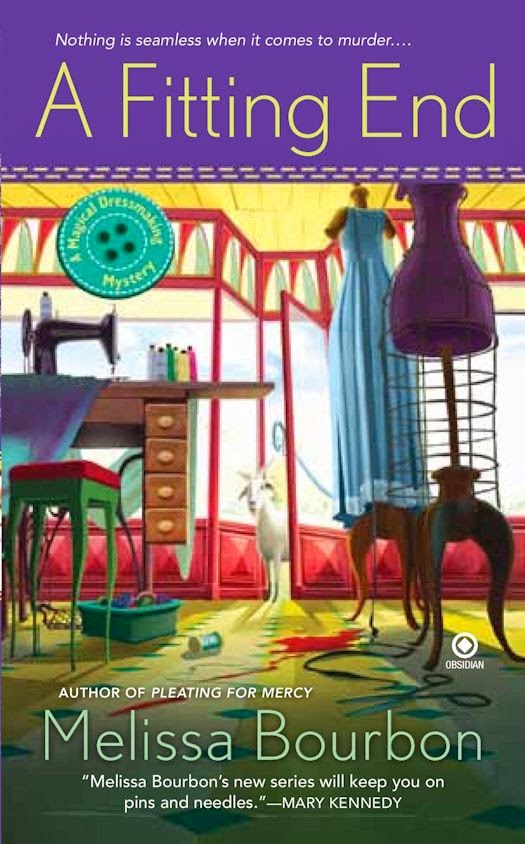 Business is booming at Harlow Jane Cassidy's custom dressmaking boutique-even with her great-grandmother's ghost hanging around the shop. But when a local golf pro is found stabbed with dressmaking shears, the new town deputy suspects Harlow. Now she has to clear her name before the next outfit she designs is a prison jumpsuit... 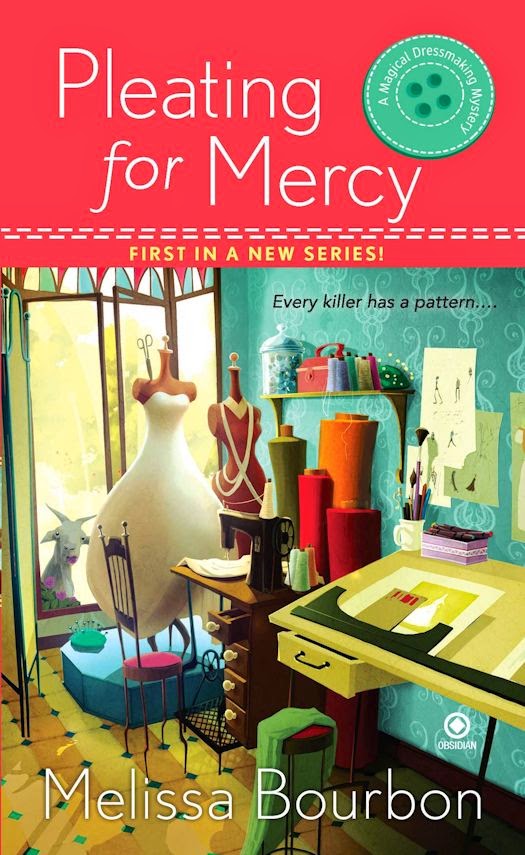 All the Cassidy women possess special gifts. Harlow Jane Cassidy's is creating beautiful dresses. But she's about to discover secrets in her own family and another gift-one that can reach beyond the grave....

When her great-grandmother passes away, Harlow leaves her job as a Manhattan fashion designer and moves back to Bliss, Texas. But soon after she opens Buttons & Bows, a custom dressmaking boutique in the old farmhouse she inherited, Harlow begins to feel an inexplicable presence....

One of her first clients is her old friend Josie, who needs a gown for her upcoming wedding. But when Josie's boss turns up dead, it starts to look as if the bride-to-be may be wearing handcuffs instead of a veil. Suddenly, Josie needs a lot more from Harlow than the perfect dress. Can Harlow find the real killer-with a little help from beyond?

Melissa Bourbon, who sometimes answers to her Latina-by-marriage name Misa Ramirez, gave up teaching middle and high school kids in Northern California to write full-time amidst horses and Longhorns in North Texas. She fantasizes about spending summers writing in quaint, cozy locales, has a love/hate relationship with yoga and chocolate, is devoted to her family, and can’t believe she’s lucky enough to be living the life of her dreams.

She is the Executive Publicity Director with Entangled Publishing, is the author of the Lola Cruz Mystery series with St. Martin’s Minotaur and Entangled Publishing, and A Magical Dressmaking Mystery series with NAL. She also has written two romantic suspense novels, a light paranormal romance, and is the co-author of The Tricked-out Toolbox, a practical marketing and publicity guide for authors.