Please welcome James L. Sutter to The Qwillery. The Redemption Engine is published on April 30, 2014 by Paizo Publishing. Please join The Qwillery in wishing James a Happy Publication Day! 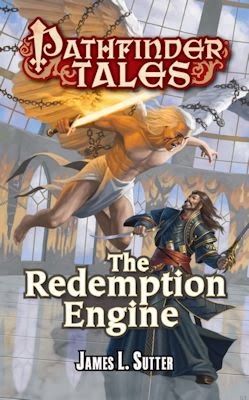 TQ:  Welcome back to The Qwillery! How has your novel writing process changed (or not) from when you wrote Death's Heretic (2011) to The Redemption Engine (2014).

James:  Honestly, the process was pretty similar—Death’s Heretic taught me the value of an extremely detailed outline, and I did that again for The Redemption Engine. That said, something I learned partway through the new book was the importance of deliberately charting out character arcs. In Death’s Heretic, the character arcs were something I did instinctively as part of the book’s central romance, but in this book—which had no romance element for the main character—I had to be more intentional about it.

I also think that second books are both easier and harder to write. The first time you write a book, you know you have no idea what you’re doing, so you cut yourself a lot of slack (or ought to). What I didn’t realize is that the second time you write a book, you have a much better grasp on the mechanics, yet you also have higher expectations for yourself, so that terror is still there. I’m starting to think it might never go away completely...

Salim’s badass warrior sidekicks in this one are Bors and Roshad, a pair of married gay men. I was really excited to write them for two reasons: First, because I feel like gay men in committed relationships are something we don’t traditionally see very often in fantasy, especially as capable warriors. Diversity is something that’s really important to us with Pathfinder, as well as to me personally, so I thought it was high time to get a gay couple front and center. The second reason is more about the writing itself—I’ve been finding recently that writing gay romance is easier than writing straight romance for me, possibly because my imagination hasn’t been as deeply infiltrated by stale Hollywood tropes, and I can just write what feels true.

James:  The Redemption Engine is a sequel to Death’s Heretic in the sense that it stars the same character, Salim, and comes chronologically after the first book, each book truly stands alone, so you can enjoy one without having read the other.

Both books are set within the world of the Pathfinder Roleplaying Game, which I helped to create. It’s a big, robust fantasy setting which pulls from all sorts of different types of fantasy, from Tolkien to Miéville and everything in between. The novels don’t presume that you know anything about the game—they read just like normal fantasy books—but the nice thing is that if you’re interested in learning more about the world or telling your own stories in it, there’s a whole system for doing so! For instance, this book is set in the city of Kaer Maga—a Mos Eisley/Perdido Street Station kind of hive of spot—which I created years ago and detailed heavily in the game book City of Strangers. So if after you read the novel you want a travel guide to the city, allowing you to turn down all those streets my main characters walked past—it exists!

While there are a bunch of other Pathfinder Tales novels, the stand-alone philosophy applies to all of them, and there’s generally not much crossover of characters between authors save for the occasional cameo.

TQ:  Which character in The Redemption Engine was most difficult to write and why? Do you have a favorite character?

James:  I actually think that Salim Ghadafar, my main character, was the hardest because I’d written so much about him in Death’s Heretic. He’s a very mysterious character—a former atheist priest-hunter now forced to work for the goddess of death, tracking down errant souls—and a big draw in the first book is finding out how he got to be this way. So when it came time to write the sequel, I had to figure out how to make him interesting for readers who already knew his backstory while simultaneously not alienating new readers. And while I’d love for him to have that iconic Batman feel, I also didn’t want to write a character that’s exactly the same from book to book—he’s a person, and people change and grow. Figuring out how to make that work required me to step up my game as an author.

I really enjoyed a lot of characters in this book, but my favorite is undeniably Gav, the young street urchin who acts as Salim’s local guide. He’s the quintessential scamp who fancies himself a philosopher, and combines a sort of Dickensian flavor with this constant stream of carnival-barker patter that’s immensely fun to write.

TQ:  Please give us one or two of your favorite (non-spoilery) lines from The Redemption Engine.

James:  Given my answer above, I think I have to let Gav talk a little:

“You know what I value, gov? Bread in my mouth. A shirt on my back. Maybe a girl down on Box Street who likes my patter. Those are values, lord, and I know why they’re called that--because they’re worth what you pay for them. No more, no less.” He gave Salim a pitying smile. “You asked before if I’d bow to a queen, and I said no. But I’d sure as hell take her coin if she was handing out alms. Principle’s slippery, sire--try to stand on it too long, you wind up lying in the dirt. Me, I take care of myself.”

James:  More of the same! I’m going to take some time off from novel-writing to do another campaign setting book for Pathfinder (currently secret, but it’s one folks have been requesting for a while), and then I hope to return with a third Salim novel that ties together a number of threads from the first two. But of course, before any of that I need to spend some time promoting this book—it turns out that writing a book is only half the job! 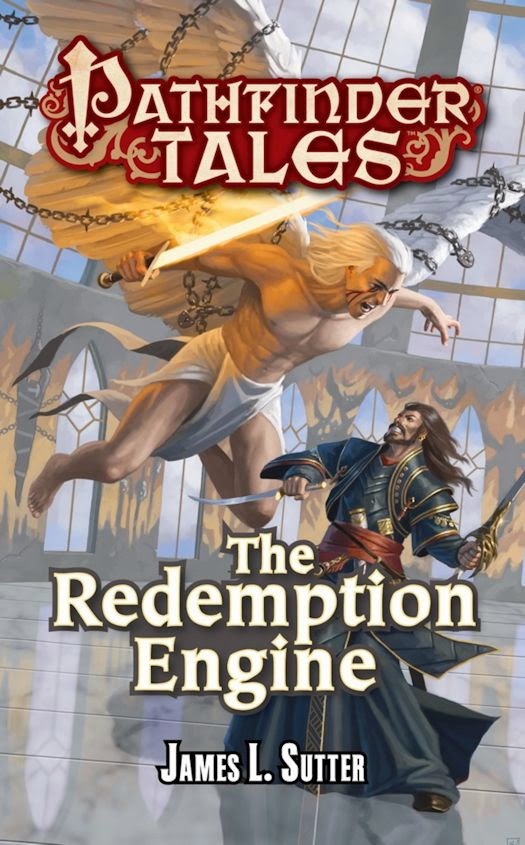 When murdered sinners fail to show up in Hell, it's up to Salim Ghadafar, an atheist warrior forced to solve problems for the goddess of death, to track down the missing souls. In order to do so, Salim will need to descend into the anarchic city of Kaer Maga, following a trail that ranges from Hell’s iron cities to the gates of Heaven itself. Along the way, he’ll be aided by a host of otherworldly creatures, a streetwise teenager, and two warriors of the mysterious Iridian Fold. But when the missing souls are the scum of the earth, and the victims devils themselves, can anyone really be trusted? 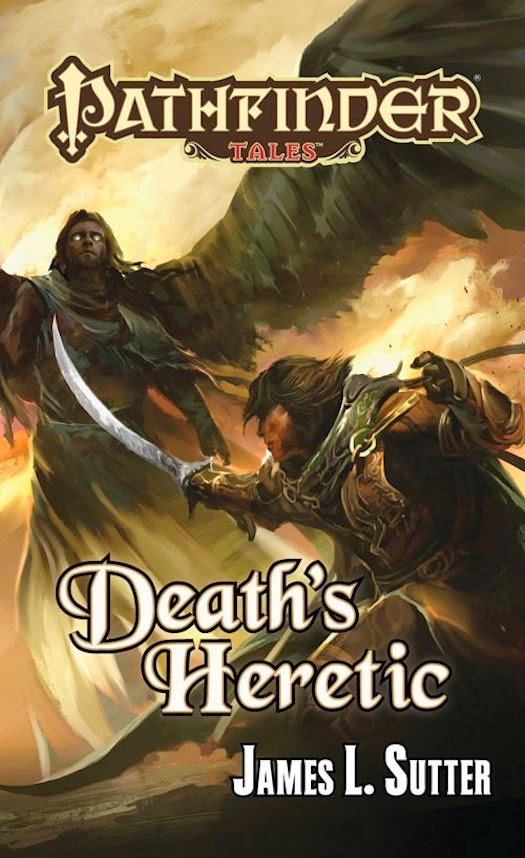 Nobody cheats death! A warrior haunted by his past, Salim Ghadafar serves as a problem-solver for a church he hates, bound by the goddess of death to hunt down those who would rob her of her due. Such is the case in the desert nation of Thuvia, where a powerful merchant on the verge of achieving eternal youth via a magical elixir is mysteriously murdered, his soul kidnapped somewhere along its path to the afterlife. The only clue is a magical ransom note, offering to trade the merchant’s successful resurrection for his dose of the fabled potion. But who would have the power to steal a soul from the boneyard of Death herself? Enter Salim, whose keen mind and contacts throughout the multiverse should make solving this mystery a cinch. There's only one problem: The investigation is being financed by Neila Anvanory, the dead merchant's stubborn and aristocratic daughter. And she wants to go with him.

Along with his uninvited passenger, Salim must unravel a web of intrigue that will lead them far from the blistering sands of Thuvia on a grand tour of the Outer Planes, where devils and angels rub shoulders with fey lords and mechanical men, and nothing is as it seems... 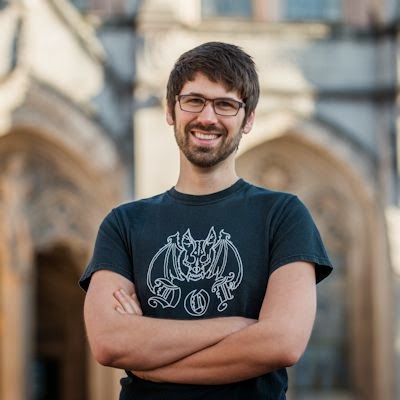 James Lafond Sutter is the Managing Editor for Paizo Publishing and a co-creator of the Pathfinder Roleplaying Game campaign setting. He is the author of the novels Death's Heretic and The Redemption Engine, the former of which was #3 on Barnes & Noble's list of the Best Fantasy Releases of 2011, as well as a finalist for both the Compton Crook Award for Best First Novel and a 2013 Origins Award. He's written numerous short stories for such publications as Escape Pod, Apex Magazine, Beneath Ceaseless Skies, and the #1 Amazon best-seller Machine of Death. His anthology Before They Were Giants pairs the first published short stories of science fiction and fantasy luminaries with new interviews and writing advice from the authors themselves. In addition, he's published a wealth of award-winning gaming material for both Dungeons & Dragons and the Pathfinder Roleplaying Game.

When not writing or editing, James has performed extensively with various bands and other musical projects ranging from punk and progressive metalcore to folk and musical theater. James lives in Seattle with his wife, a gaggle of roommates, and a fully functional death ray. For more information, look him up at jameslsutter.com or send him a message on Twitter at @jameslsutter.