Gemsigns (®EVOLUTION 1) by Stephanie Saulter is debuting on May 6th in the US. You can win a special galley of the novel now! You'll only have until April 17th to enter (see the Rafflecopter below). The first giveaway was won by Entry #55Nichole S.  If you don't win this time you will have more chances coming up! 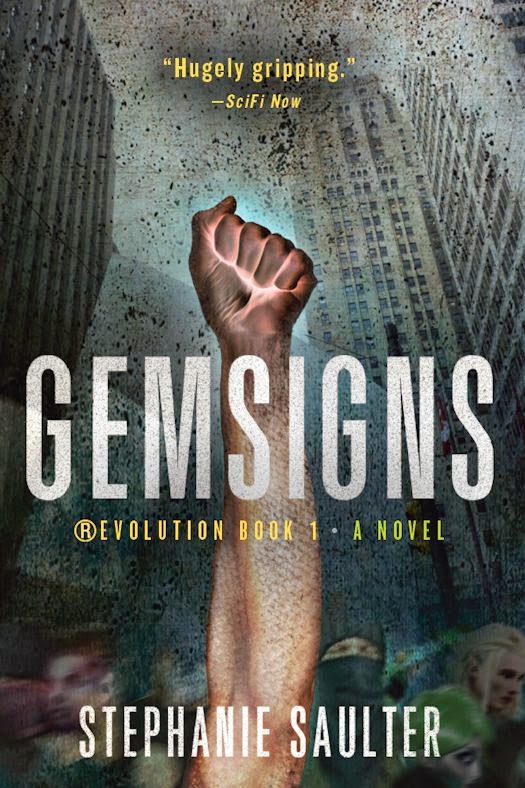 Starburst magazine raved that Gemsigns, the first novel in a series, is “a fascinating and compelling read, exploring the boundaries of human behavior, religious influences, and the morality of the everyday person. It comes highly recommended.”

For years the human race was under attack from a deadly Syndrome, but when a cure was found – in the form of genetically engineered human beings, Gems—the line between survival and ethics was radically altered. Now the Gems are fighting for their freedom, from the oppression of the companies that created them, and against the Norms who see them as slaves. And a conference at which Dr Eli Walker has been commissioned to present his findings on the Gems is the key to that freedom. But with the Gemtech companies fighting to keep the Gems enslaved, and the horrifying godgangs determined to rid the earth of these ‘unholy’ creations, the Gems are up against forces that may just be too powerful to oppose.

What:  One entrant will win a special galley of Gemsigns (®EVOLUTION 1) by Stephanie Saulter. US ONLY

Who and When:  The contest is open to all humans on the planet earth with a US mailing address. Contest ends at 11:59PM US Eastern Time on April 17, 2014. Void where prohibited by law. No purchase necessary. You must be 18 years old or older to enter.