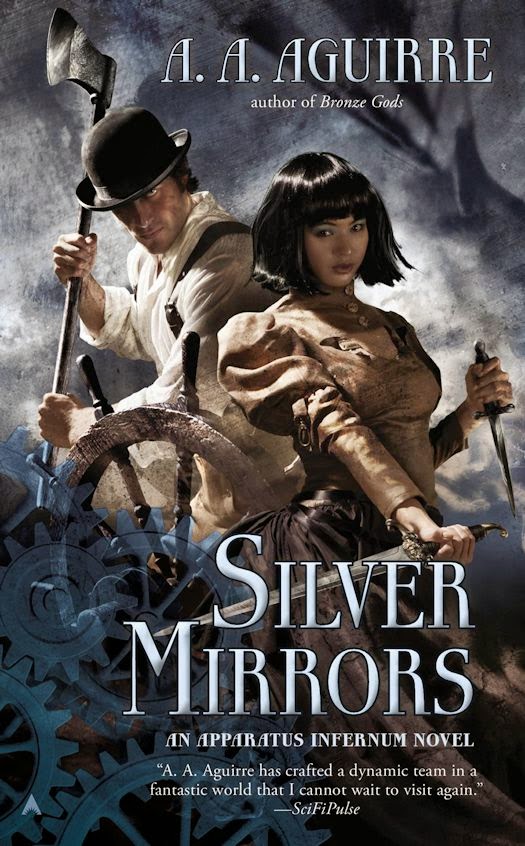 As powerful magic comes creeping back, dangerous days are dawning…

Criminal Investigation Division inspectors Janus Mikani and Celeste Ritsuko were lucky to make it out of their last mission alive. Since then, strange troubles have plagued the city of steam and shadows, apparently as a result of magic released during the CID inspectors’ desperate interruption of an ancient ritual. The fabric of the world has been unsettled, and the Council has assigned Mikani and Ritsuko to investigate.

They soon discover that matters are worse than they imagined. Machines have developed minds of their own, cragger pirates are raiding the seas with relentless aggression, and mad elementals are running amok. As the chaos builds to a crescendo, Mikani and Ritsuko must fight a war on two fronts—and this time, they may not be able to turn the deadly tide…

The husband and wife writing duo of A. A. Aguirre  are back with their second instalment in the Apparatus Infernum series, Silver Mirrors. Celeste Ritsuko and Janus Mikani return for another adventure and another mystery to solve. Book 2 starts not long after book 1, Bronze Gods, when the investigators solved the case of a madman who was terrorizing Dorstaad, murdering your woman to enable his evil master plan. The case brought Ritsuko and Mikani closer together and left Ritsuko with a special talent of her own. Life is never easy and it's not long before the fall out from their big case in Bronze Gods has started to cause mayhem across Hy Breasil with machines taking on a life of their own and pirates attacking along the coast. Ritsuko and Mikani are sent to investigate and call in a favour from Mikani's friend and former girlfriend Saskia who captains a ship. Before too long the detectives have hit the high seas and sailing far away from the civility they have known in Dorstaad. Together with Saskia's crew Ritsuko and Mikani have only a few short days to find out what is behind the unusual and destructive events before everything and everyone they know are destroyed in a magical apocalypse.

I really enjoyed book one of this series and thought both Mikani and Ritsuko were engaging characters. Silver Mirrors takes not only Ritsuko and Mikani out of their comfort zone with life aboard Saskia's ship but it took me out of it as well. This part of the plot was a bit too 'piratey' for me and I thought that the new characters diluted the power of Mikani and Ritsuko's relationship. While book 1 read more like a police thriller this instalment was trying to be too many different things with a mix of swashbuckling pirates, evil fae and pissed off elementals. Aguirre also really dragged out the brewing romance between the two colleagues and if you were expecting some movement on this front then you will be disappointed. While perhaps the decision to stage most of the plot on a ship wasn't my favourite aspect of this instalment you can't fault how Aguirre tell their story in a richly textured world with complicated and difficult characters. The book is just so well written that you can't help but be drawn in from the very first pages. Fingers crossed Mikani and Ritsuko's swashbuckling days are over.