The Qwillery is thrilled to be able to give away a copy of The Raven's Shadow by Elspeth Cooper. This is the 3rd novel in Elspeth's The Wild Hunt series and was preceded by Songs of the Earth and Trinity Rising. 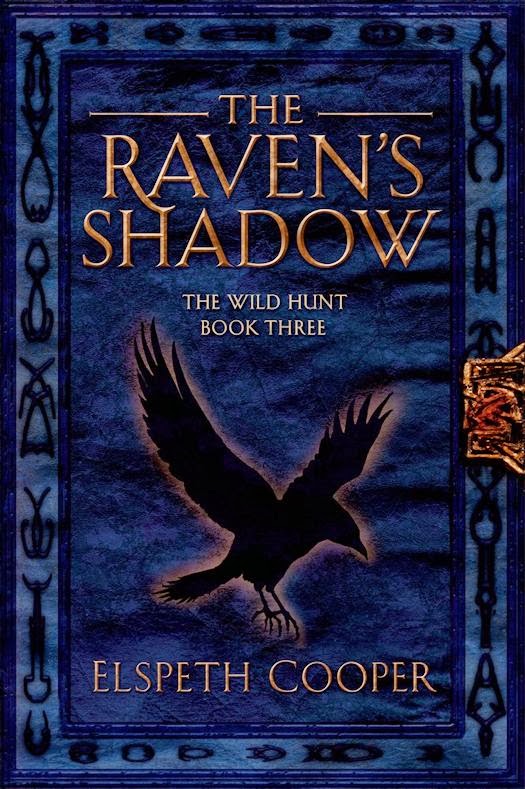 The Raven's Shadow, the third book of Elspeth Cooper’s The Wild Hunt series finds war brewing on both sides of the Veil between the worlds.

The desert of Gimrael is aflame with violence, and in the far north an ancient hatred is about to spill over into the renewal of a war that, a thousand years ago, forged an empire. This time, it may shatter one.

Wrestling with his failing grip on the power of the Song, and still trying to come to terms with the horrifying events he witnessed in El Maqqam, Gair returns to the mainland with only one thing on his mind: vengeance. It may cost him his life, but when everything that he had to live for is being stripped away from him, that may be a fair price to pay.

Old friends and old foes converge in a battle of wills to stem the tide of the Nimrothi clans as they charge south to reclaim the lands lost in the Founding Wars. If they succeed, the rest of the empire may be their next target. And with the Wild Hunt at their head, the overstretched Imperial Army may not be enough to stop them.

ELSPETH COOPER was born in 1968 in Newcastle upon Tyne. She has been a fan of the written word since she could read unaided, and has been writing stories for almost as long. Songs of the Earth was her first novel. She lives in Northumberland, UK, with her husband and two cats in a house full of books. You can visit her online at http://elspethcooper.com.

What:  One copy of The Raven's Shadow (The Wild Hunt 3) by Elspeth Cooper from Tor Books. US/CANADA  ONLY

Who and When:  The contest is open to all humans on the planet earth with a US or Canadian mailing address. Contest ends at 11:59 PM US Eastern Time on March 18, 2014. Void where prohibited by law. No purchase necessary. You must be 18 years old or older to enter.