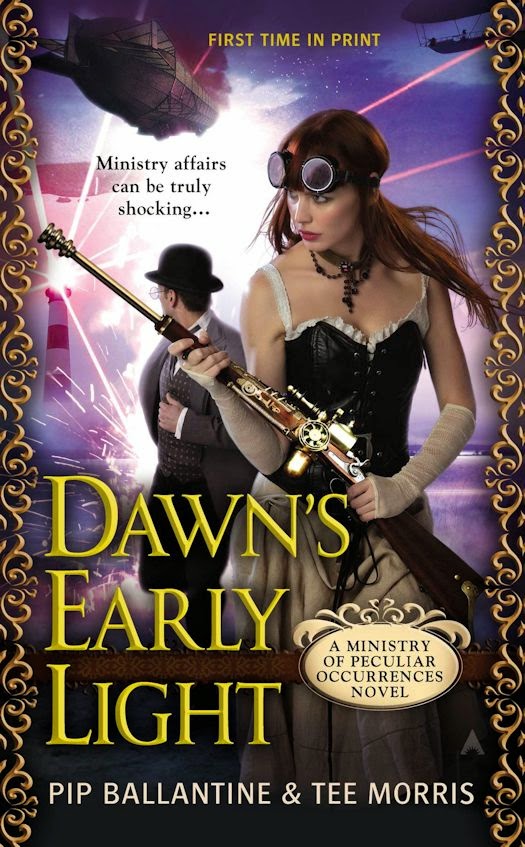 Working for the Ministry of Peculiar Occurrences, one sees innumerable technological wonders. But even veteran agents Braun and Books are unprepared for what the electrifying future holds…

After being ignominiously shipped out of England following their participation in the Janus affair, Braun and Books are ready to prove their worth as agents. But what starts as a simple mission in the States—intended to keep them out of trouble—suddenly turns into a scandalous and convoluted case that has connections reaching as far as Her Majesty the Queen.

Even with the help of two American agents from the Office of the Supernatural and the Metaphysical, Braun and Books have their work cut out for them as their chief suspect in a rash of nautical and aerial disasters is none other than Thomas Edison. Between the fantastic electric machines of Edison, the eccentricities of MoPO consultant Nikola Tesla, and the mysterious machinations of a new threat known only as the Maestro, they may find themselves in far worse danger than they ever have been in before…

Dawn's Early Light is the third book in the Ministry of Peculiar Concurrences series by the husband and wife writing duo of Pip Ballantine and Tee Morris. Our favourite archivist and colonial pepperpot are in the thick of it once more, this time on a Ministry sanctioned mission to 'The Americas'. When we last left Books and Braun they have just finished sharing a little confession and (if not more importantly) a steamy smooch right before Dr Sound informs them they were being sent off to join their counterparts in the The Office of Supernatural and Metaphysical in the States. Book 3 starts midway through their Atlantic voyage and the action starts early as the opening scenes take place as Books and Braun chase a burglar through the underbelly of their airship. Upon landing in North Carolina they meet their American counterparts - the lovely Felicity Lovelace, a gentrified librarian who is hoping to get her hands on our favourite archivist, Wellington Books and Wild Bill Wheatley, the cowboy agent who enjoys gun-slinging as much as the fiery, Eliza Braun. The foursome discover that none other than the pre-eminent inventor,Thomas Edison is about to unleash the most devastating of weapons on the unsuspecting populace on behalf of the nefarious House of Usher. Books and Braun, along with the American agents chase Edison across the country to put a stop to his scheme. Can Books' analytical mind and superior shooting skills or Braun's love of pyrotechnics save the day or will they be shown up by the American agents? You will have to read it to find out.

Ballantine and Morris keep this series fresh not by just changing the setting of the story from England to the States but they also change how the story plays out. For the first time this series Books and Braun have actually assigned a mission in the field by Dr Sound rather than skulking around behind his back, as in previous books. The change of scenery really keeps the series from becoming too 'samey' and introduces us to a whole new country of potential characters. Don't get me wrong I love the London setting and think it lends itself more to steampunk than the mid-west but it really works for the plot and the new characters.

While we are introduced to new characters in Lovelace and Wheatley, there are a number of famous people who take part in this story including Thomas Edison, Henry Ford and Nikola Tesla who has been brought in by Dr Sound to help out on the mission. Even though there are new enemies for Books and Braun to outsmart some of my favourite baddies are back including the Maestro and Sophia de la Morte. There is a big reveal about The Maestro which I was not expecting. It was very exciting. In fact the whole plot was terribly exciting with lots of action and surprises galore. I don't want to get into the side plot involving Her Majesty as I don't want to give too much away. Suffice today, it's pretty exciting.

Ballantine and Morris are out to tease the reader with the romance between Books and Braun. There is no immediate follow up to the kiss in book 2. No, we have to wait as the authors leave the characters to stew in misunderstanding and mis-direction with no romantic follow up until late in the book. Eliza Braun is more than a bit put out when the lovely Miss Lovelace fixes to make Books her man while Books inadequacies in the romance department almost force Eliza into the arms of the dashing agent Wheatley. The scenes between Lovelace and Braun are especially amusing. All good fun and all in the midst of a dastardly plot by the mechanical Maestro.

If you read my Week in Reviews you will have already read me wax lyrical about the Ministry of Peculiar Occurrences series and here I go again. This is a great series as Ballantine and Morris delivered another great plot with the sinister Thomas Edison while at the same time continued to develop the overall plot arch with the House of Usher. I have read a number of books by Ballantine and one other by Morris which I loved.  However, when you put these two together we get a fantastic writing partnership that has given us this cracking book and series. If you are a steampunk fan then this is a must read and even if you aren't get this series in your TBR.