Please welcome Debbie Viguié to The Qwillery. Debbie is the author of several series including the Witch Hunt series. Circle of Blood (Witch Hunt 3) will be published on April 1, 2014. 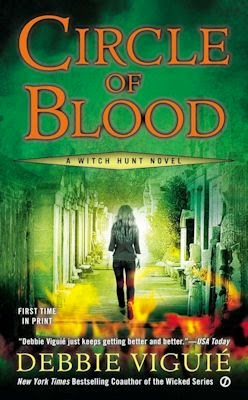 TQ:  Welcome to The Qwillery. You have published over 25 novels in several series. How has your writing process changed (or not) over the years? Are you a plotter, pantser, or hybrid plotser?

Debbie:  Thanks for having me! I tend to write more linearly than I use to. I use to skip around and write the scenes almost completely out of order. There's still some of that, but not as much. I am a plotter if I'm co-writing with someone and a pantser if I'm writing by myself.

TQ:  You've written novels for multiple series. How do you keeps things straight in each series?

Debbie:  When I was a kid I read multiple books at the same time (a book for the bedroom, a book for the car, a book for school, etc.) and people use to ask me the same question! I think because of that experience it's pretty easy for me to keep things straight now when I'm writing multiple things at the same time. The only time I ever had a problem was when I was working on a series where the protagonist was named Candy at the same time I was working on another series where the protagonist was named Cindy. I certainly didn't think that one through! I kept typing the wrong names in the manuscript.

TQ:  Your most recent novel is Circle of Blood, the 3rd and final novel in the Witch Hunt series. Tell us something about Circle of Blood that is not in the book description.

Debbie:  Freaky, the black kitten who became a huge black panther at the end of the last book, begins to take on even more of a life of his own in this book. Freaky was created as an homage to my cat Schrodinger. One of my nicknames for him is Freaky Baby.

TQ:  Which character in the Witch Hunt series has surprised you the most?

Debbie:  Actually, Samantha has. I had not originally intended to turn her as dark as I did at the end of the second book. It makes her journey through book three that much more powerful though.

TQ:  In the Witch Hunt series who is your favorite good 'guy', bad 'guy' or ethically ambiguous character?

Debbie:  Samantha's partner, Ed, is my favorite good guy. He and she have such great rapport and he is very funny with his sarcastic dialogue. My favorite bad guy is Abigail, the leader of Samantha's old coven because the woman just creeps me out.

TQ:  What sorts of research have you done for the Witch Hunt series? What is one of the oddest things you've found?

Debbie:  I've done a lot of research on places, to make sure they feel authentic. One of the oddest things I've found was a website where urban explorers had posted pictures documenting the current state of ruin and decay of the Jazzland theme park in New Orleans. It was destroyed by Katrina and has sat rotting ever since. I give detailed descriptions of Samantha's experiences there in this book and the location is just disturbing. There are things like giant smashed clown heads that have fallen off buildings and are on the ground.

TQ:  You've written is several genres: Thrillers, Paranormal Romance and Urban Fantasy. Are there any other genres (or sub-genres) in which you'd like to write?

Debbie:  I've also written mysteries! I'm dying to do a western. In fact, I am working on writing one as we speak.

Debbie:  Well, I'm hard at work on a supernatural retelling of Robin Hood that I'm writing with James R. Tuck.

Debbie:  Thank you for having me! 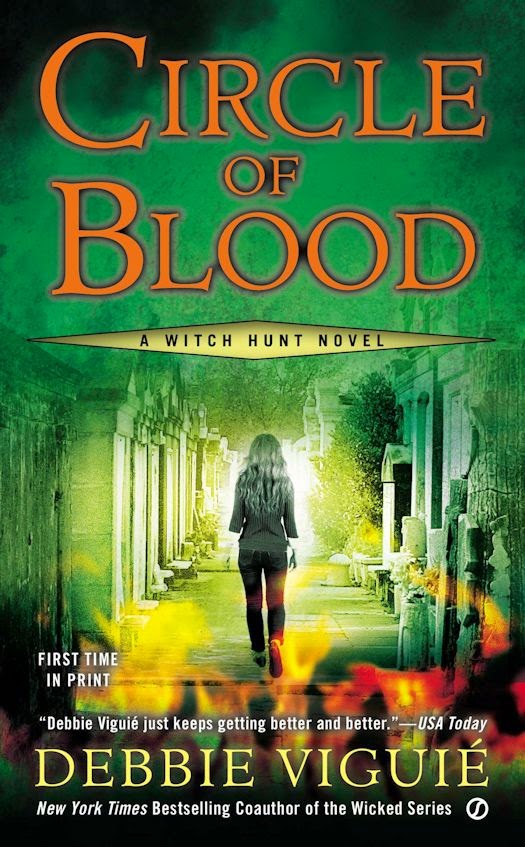 Samantha Ryan—cop by choice, witch hunter by necessity—is about to confront the witch who has been secretly manipulating her life. But her search for the truth about her past may end in her death.…

All her life, Samantha Ryan has been haunted by a circle of blood, which she has tried to keep at bay—ever since she escaped a vicious Salem coven of witches as a child. But now her carefully constructed life has given way to the darkness she might have embraced, had she not run away.

Angry, focused, and more than willing to use her powers on anyone who gets in her way, Samantha travels to New Orleans to confront Lilith Black, the witch who has been mercilessly shaping events around her for months.

But little does Samantha know that her own nightmarish past and Lilith’s are inescapably intertwined—and that what Lilith wants most of all is for Samantha to suffer until her final breath.… 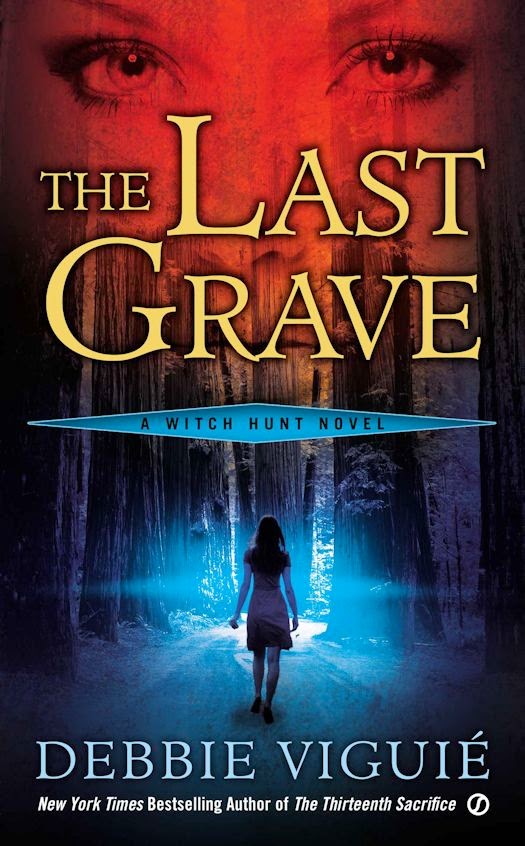 Samantha Ryan—homicide detective by choice, witch hunter by necessity—has left Salem for San Francisco, hoping a move will help her forget the horrors of her past. But she’s about to discover that witches tempted by the dark side are everywhere....

Samantha is doing whatever she can to forget her terrible childhood in a coven destroyed by its members’ greed and lust for power. Now she’s a San Francisco detective struggling to fight her own desire to turn to magic. But as she discovers, escaping who you are isn’t easy.

Her latest case seems straightforward enough—the murder of a local historian named Winona Lightfoot. But strange clues take Samantha to the Santa Cruz Mountains, a place teeming with witches and black magic. As she works to uncover the connection between Winona and this coven, an earthquake rocks the Bay Area. That’s when Samantha has a premonition: Something is coming. Something evil.

To survive—and save everyone around her—she will have to tackle her greatest fear, and hope she isn’t the next one put into a deep, dark grave.... 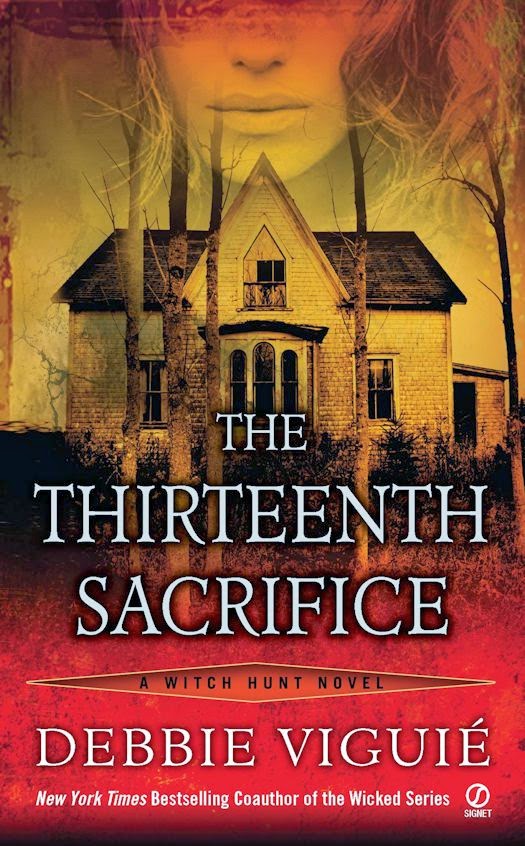 When young women start dying, Boston cop Samantha Ryan is the perfect person to investigate, for only she knows what the archaic symbol carved into their flesh means. The last in a long line of ruthless witches, she grew up in a coven seduced by power and greed. And now she's sure that bad witches have returned to Salem. Reluctantly, Samantha goes undercover-into a town obsessed with black magic, into her terrifying past, and into the dark, newly awakened heart of evil. 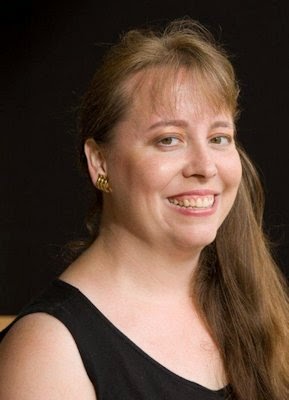 Debbie Viguié is the New York Times Bestselling Author of the Wicked series and two dozen other novels. Debbie writes thrillers including the Witch Hunt trilogy, The Psalm 23 Mysteries, and the Kiss trilogy. When Debbie isn’t busy writing she enjoys spending time with her husband, Scott, visiting theme parks. They live in Florida with their cat, Schrödinger. Visit Debbie online at www.debbieviguie.com.

What:  A Mass Market Paperback copy of Circle of Blood (Witch Hunt 3) by Debbie Viguié from Signet. US/CANADA ONLY

Who and When:  The contest is open to all humans on the planet earth with a US or Canadian mailing address. Contest ends at 11:59 PM US Eastern Time on April 6, 2014. Void where prohibited by law. No purchase necessary. You must be 18 years old or older to enter.