Alexa Egan is the author of The Imnada Brotherhood novels - Demon's Curse, Shadow's Curse and the upcoming Warrior's Curse. In addition to the 3 novels, there are 3 eNovellas - Awaken the Curse, Unleash the Curse and Vanquish the Curse. These 3 eNovellas have been collected in one eBook, Cursed, which is available for $0.99 until April 14, 2014. 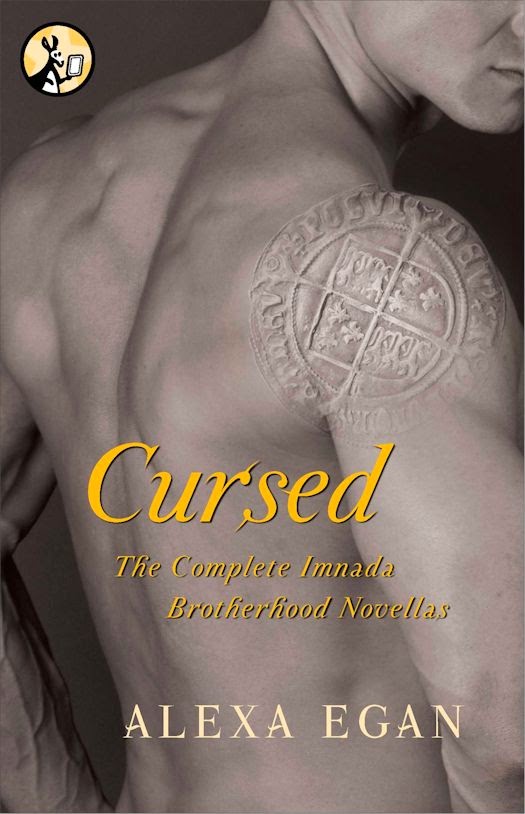 Awaken the Curse
University student James Farraday and professor’s daughter Katherine Lacey embark on a curse-ridden quest to find Katherine’s father, who vanished while studying a mysterious ancient obelisk. As they unravel the mystery, legends point to the existence of the Imnada, a race of shape-shifters said to have died off a thousand years ago. Or is the professor’s disappearance the result of a very human villain? Soon James and Kate’s search for the truth means fighting for their lives. Yet every hour they spend together exploring the past leads them to a very present and irresistible temptation…

Unleash the Curse
Neither actress Sarah Haye nor London’s most eligible bachelor, Sebastian Commin, the Earl of Deane has ever forgotten their scandalous night of white hot passion—and the differences that make a future together impossible. Yet they find themselves back together as they try to solve the mystery of a brutal attack on an Imnada shape-shifter and a sinister entity known as the Naxos. When the Naxos strike again, Sarah realizes she’s willing to risk a little scandal to save the world…and the man she loves.

Vanquish the Curse
Lady Estelle Swann didn’t come to London in search of a husband. Instead she’s here hunting for one of the magical Keys of Gylferion in hopes of preventing a war between Fey-blood and shape-shifter. So when the notorious scoundrel Lt. Jack Ramsay turns his dangerous charms her way, she’s more than a little suspicious. But he’s after something else—something that leads the couple on a mission both complicated and deadly. Soon Estelle and Jack find themselves fighting not only unseen enemies but their own very dangerous attraction… 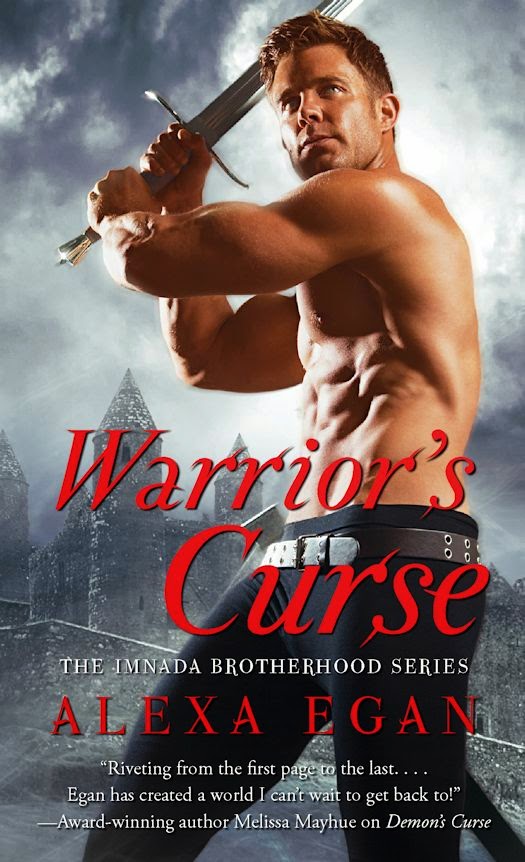 The third novel in the dark and sexy Imnada Brotherhood series about shape shifters in Regency-era England.

Despite being cast out of his clan, Gray de Coursy has been summoned to his estranged grandfather’s deathbed. A perfect opportunity to steal Jai Idrish, the Imnada’s most sacred relic and his last hope for breaking the fiendish spell imprisoning him.

Chosen as the Imnada clans’ next high shaman, Alys Swynford’s very soul has become inextricably bound to Jai Idrish—a crystal sphere that dates to the very origins of the Imnada. So when she catches Gray stealing it, he is left with only one choice—keep shaman and sphere together as the pair travel to The Gateway, the door between this world and the one the Imnada left behind aeons ago. For only there can the curse be lifted and Gray freed.

But conspirators among the Imnada have already opened the door to the shape-shifters’ ancient and deadly enemy. Now it will take the strength of the warrior and the power of the shaman to stop this otherworldly executioner—before it’s too late. 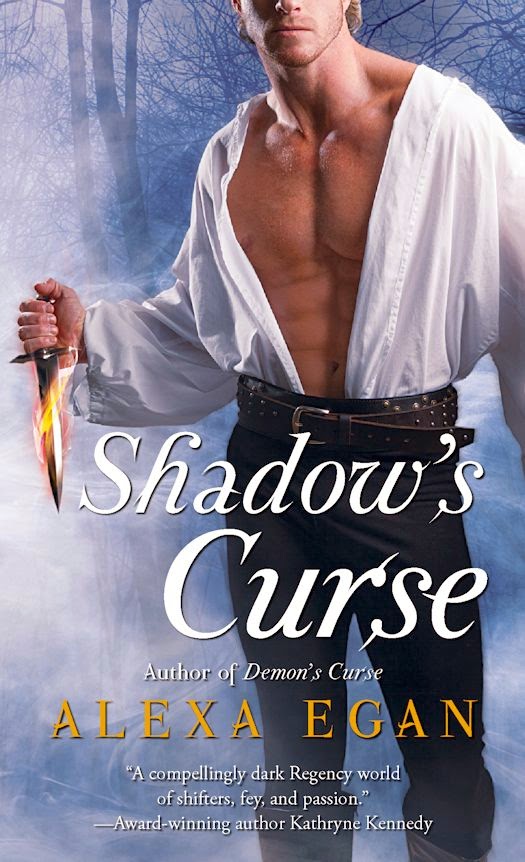 Can the magic of desire defeat the powers of darkness?

Forced by her half brother to use her dark gift of necromancy for profit, lovely Callista Hawthorne is determined to flee to her one chance for safety, her aunt in Scotland. With no hope of success unless she finds help on the long road north, she offers cursed shapechanger David St. Leger an irresistible bargain.

David—one of the mysterious Imnada—stalks the night streets of Regency London as a large black wolf. Renounced by his own kind, he spends his desperate rage on thieves and murderers. While Callista’s proposal will allow him to escape the terrible enchantment binding him, agreeing to her terms will force him into the treacherous world of the half-Fey Other, his clan’s ancient foes.

Drawn together by danger, David and Callista find passion in each other’s arms. But can they forswear the centuries of enmity separating their two races, and find a love they dare not even imagine? 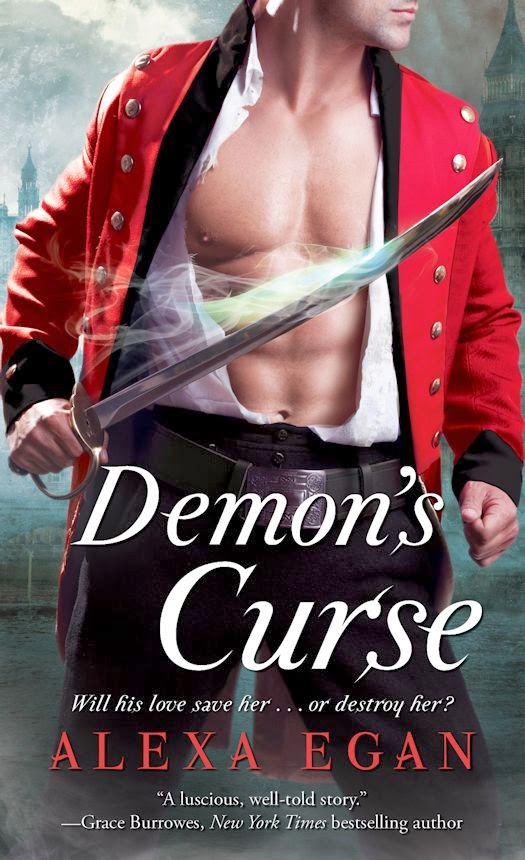 One of the mythical race of shape-shifting Imnada and a member of an elite military unit, Captain Mac Flannery suffers under a ruthless curse. As the result of a savage massacre on the eve of Waterloo, he and the men he served with are forced to live the hours of darkness trapped as their animal aspects. Now one of them has been murdered, and Mac suspects the existence of the Imnada may finally have been discovered. His only link to unearthing the truth—Bianca Parrino, the beautiful actress whom every man desires.

. . . to his forbidden desires

Forging a new life for herself after escaping the clutches of her abusive husband, Bianca is again drawn into violence when a dear friend is brutally murdered and she becomes a suspect. Forced to place her trust and her life in Mac’s hands as they flee a determined killer, Bianca cannot deny she is falling for the mysterious soldier. But will his dark secrets tear them asunder? Or will love be the key to breaking even the cruelest of spells?