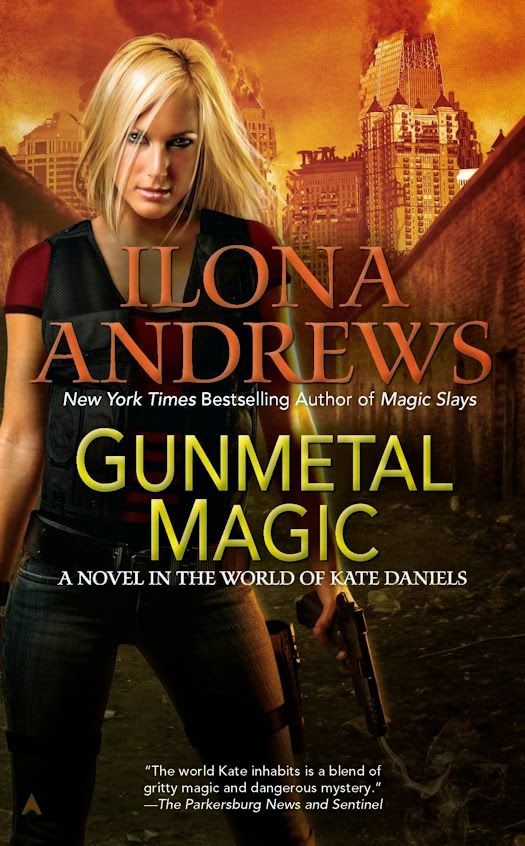 After being kicked out of the Order of the Knights of Merciful Aid, Andrea’s whole existence is in shambles. She tries to put herself back together by working for Cutting Edge, a small investigative firm owned by her best friend.

When several shapeshifters working for Raphael Medrano—the male alpha of the Clan Bouda, and Andrea’s former lover—die unexpectedly at a dig site, Andrea is assigned to investigate. Now she must work with Raphael as her search for the killer leads into the secret underbelly of supernatural Atlanta. And dealing with her feelings for him might have to take a back seat to saving the world…

Ilona Andrews’ Kate Daniels series is one of my favorites. The authors have created one of the most intriguing worlds of fantasy set in Atlanta, Georgia, where magic and technology alternate. When technology rules, magic fails; and vice versa. Andrews has also established some pretty memorable characters: Kate Daniels, her consort Curran, and the others who surround them. Two of those surrounding characters are the focus of Gunmetal Magic – Andrea Nash and Raphael Medrano. Gunmetal Magic is a novel in the Kate Daniels World.
.
Andrea is Kate Daniels’ best friend. In earlier novels, she worked with Kate for the Order of Knights of Merciful Aid, until she was kicked out for being a shapeshifter. However, Andrea is an unusual shapeshifter, and so she does not fit into the shapeshifter world very well either. In addition, she has had an on-again, off-again relationship with Raphael in those earlier novels.

This novel takes place during one of those off-again periods. Andrea goes out of her way to avoid Raphael, until some of his clan members die in a mysterious fashion. She is asked to solve the riddle of their deaths, and in order to do so, she must interact with Raphael himself. Ultimately, Andrea and Raphael solve the mystery, and during the process, they fight and flirt.

Andrews does a good job of tracking down unusual mythologies and magic and setting them into the Kate Daniels' world. This novel was no exception. I liked the Egyptian lore that I learned about during the story.

Gunmetal Magic is a good addition to the world of Kate Daniels. The book also included a short story about Kate and Curran, which was an added bonus for me.