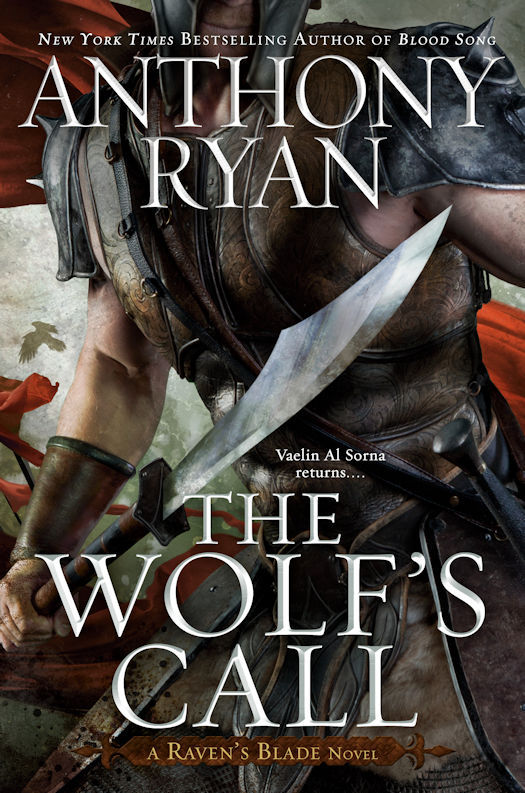 Anthony Ryan’s debut novel Blood Song—the first book of the Raven’s Shadow series—took the fantasy world by storm. Now, he continues that saga with The Wolf’s Call, which begins a thrilling new story of razor-sharp action and epic adventure.

Vaelin Al Sorna is a living legend, his name known across the Realm. It was his leadership that overthrew empires, his blade that won hard-fought battles – and his sacrifice that defeated an evil more terrifying than anything the world had ever seen. He won titles aplenty, only to cast aside his earned glory for a quiet life in the Realm’s northern reaches.

Yet whispers have come from across the sea – rumours of an army called the Steel Horde, led by a man who believes himself a god. Vaelin has no wish to fight another war, but when he learns that Sherin, the woman he lost long ago, has fallen into the Horde’s grasp, he resolves to confront this powerful new threat.

To this end, Vaelin travels to the realms of the Merchant Kings, a land ruled by honor and intrigue. There, as the drums of war thunder across kingdoms riven by conflict, Vaelin learns a terrible truth: that there are some battles that even he may not be strong enough to win.

Vaelin Al Sorna has served Queen Lyrna, also known as the Fire Queen, as Tower Lord of the Northern Reaches since the end of the Liberation War. Now, word has come of the Stalhast, a powerful enemy rising in the Far West, led by Kehlbrand, who is regarded as a god by his people. Kehlbrand is a man whose lust for domination over all free people knows no limits and who will raise his bloody fist in challenge to the Fire Queen if not stopped. Vaelin may have been content to wait until the Stalhast became a tangible threat, but he soon learns that the healer Sherin, a woman he sent to the Venerable Kingdom to ensure her well-being years ago, is directly in their deadly path. And so Vaelin sets out to assure her safety and assess this new threat first-hand.

Full disclosure: I am a huge Anthony Ryan fan. His first book Blood Song, which I reviewed in 2013, was my favorite read that year. The Wolf’s Call, a Raven’s Blade Novel which succeeds A Raven’s Shadow trilogy, begins a new chapter for Vaelin, the veteran warrior and defender of the Unified Realm. Ryan hits the ground running with his newest installment and I couldn’t be more delighted. Although the first trilogy tied things up nicely, it was very satisfying to learn what befell the characters I knew so well in the aftermath of the Liberation War’s destruction.

Ryan really knows how to create characters that readers can admire, distrust, pity, or fear. In Vaelin al Sorna he has created a character that readers really care about and root for. Vaelin’s no-nonsense reasoning, coupled with his fighting skills, and amazing sense of loyalty to those he loves makes him special. The Wolf’s Call is a great blend of familiar characters and brand-new additions. For instance, Nortah, Vaelin’s Brother of the Sixth Order, hearkens back to his early years, while his niece Ellese has just recently been sent to the Northern Reaches for training. Although Ellese is young, she is smart and her fighting skills are daunting, but it’s her attitude - the perfect balance of insubordination and rebellion - that bring her to life. Vaelin’s newest enemy, the Stalhast, were interesting to learn about. Kehlbrand is arrogant, brutal and a master manipulator which makes him a powerful threat. His sister, Luralyn has gifts and talents of her own and shares her thoughts through her own POV narrative which makes for effective story telling.

The Wolf’s Call comes in the form of a threat and warning from an old enemy. As I mentioned before this time it's personal as one of the few people still alive that Vaelin loves is being threatened. In true epic adventure form Vaelin assembles a diverse, yet trustworthy company to find the healer and protect her from harm’s way. Ryan effortlessly introduces new characters who are almost instantly relatable in the context of his consummate worldbuilding skills. He is also a master strategist, and keeps the adrenaline pumping during this action-packed volume. I really enjoyed The Wolf’s Call; I didn’t want to put it down and certainly did not want it to end. If you are looking for epic adventure, answer The Wolf’s Call.
Posted by Qwill at 6:30 AM