Interview with Stephen S. Power, author of The Dragon Round


Please welcome Stephen S. Power to The Qwillery as part of the 2016 Debut Author Challenge Interviews. The Dragon Round was published on July 19th by Simon & Schuster. 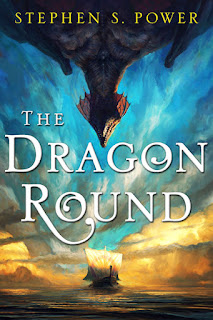 SSP:  Thanks for having me.

SSP:  I started writing in third grade when Mrs. Barclay rewarded my unexpectedly good behavior with a turn at the typewriter in the back of the classroom. During recess I wrote the first chapter of a novel. It was 100 words long. The gist was this: A flying saucer appeared over a city, there was blinding flash, and the city was gone! Mrs. Barclay was so impressed that she had me read it to the class. They were impressed too and wanted to know what happened next. Unfortunately, I never did write chapter two. I still wonder what happened to the city.

Impressing your friends is a powerful inducement, and not disappointing them is an even more powerful one, so I let the writing bug latch on.

TQ:  What inspired you to write The Dragon Round?

SSP:  I used to be an editor at Wiley, and one day another editor, Eric Nelson, was telling me about a book his son was reading. He said, "Why would someone write a book for kids without a dragon?" And I said, "Why would someone write a book for anyone without a dragon? Wait...." I went back to my office and during lunch outlined a series of six books that each covered a key moment in human-dragon relations, the way World War Z covers the key moments in the zombie war. I showed Eric the outline, and he said, "What's in book two for readers of book one?" Which suggested I'd actually outlined a series of series.

After Wiley sold our publishing line and laid us off, Eric agented The Dragon Round before returning to editorial, so he didn't just inspire the novel. He enabled my entire career.

TQ:  Did you plot it or pants it, or are you a hybrid?

SSP:  A hybrid. I learned my lesson about pantsing novels in third grade. In fact, if I hadn't figured out a hybrid system for writing a novel around the time I conceived of The Dragon Round, I probably wouldn't have written it.

SSP:  Basically, I write three outlines, each progressively longer than the last, then write the first draft. This way, at every stage, I only have to write two or three words for each one I've already written, which isn't that hard; plus I know where I'm going, but can still change directions as necessary. Most importantly, this system allows me plenty of room for invention. For instance, the poth wasn't in The Dragon Round until the third outline, and although I put her in to solve a little problem she was able to become a lead character.

I do pants short stories, through, because the initial investment isn't as large. I write the first act, and if I can see the structure of the rest I keep going. If I can't, I put the act in my backburner folder so I don't obsess over a lost cause.

SSP:  "The Count of Monte Cristo" with a dragon. #DragonRound #LiberezDantes

That's actually a really good way of figuring out your elevator pitch: describing it one tweet.

TQ:  Besides The Count of Monte Cristo, what else influenced it?

SSP:  There's a fair amount of The Wire and Breaking Bad in "The Dragon Round," a lot of Jaws, pieces of Richard Zacks' Captain Kidd and Katherine Boo's Behind the Beautiful Forevers, a scene pulled from Hamlet, one pulled from Robinson Crusoe, several Star Wars references, and some of Jack Vance's oversubtlety, but none of his hyperurbaneness.

TQ:  Stylistically, though, the novel's very different from, say, Vance or most epic fantasy.

SSP:  Yes, consciously so. I couldn't compete with a George Martin or a Brandon Sanderson when it comes to world-building, plus I tend to ramble on, so I shoot for something more spare. I live by Elmore Leonard's 10 Rules for Writing. My only disagreement with him involves the word "said." I think a different word, such as "shouted" or "whispered," could be used instead of "said" in order to indicate volume if doing so in another way would be less elegant.

TQ:  How did being a poet affect your style?

SSP:  That's where the spareness comes from. How little can I write about something and still have it make sense? How much can I cut and still make an impact? How much can I pack into a single image or line of dialogue?

TQ:  Is that the most challenging thing for you about writing?

SSP:  For me, that's the fun of writing--or rewriting, actually. I won't be spare at first. I'll let myself run a little wild, then cut back later.

My biggest challenge as a writer is prioritizing. I love writing short stories, and I'm constitutionally incapable of turning away from a prompt, but I have to focus on The Dragon Tower, the sequel to The Dragon Round. So as a reward for finishing each chapter, and to give myself some distance from the novel, I get to write a story or spend some time outlining the first book in a new series, "The Dragons of America."

TQ:  Tell us something about The Dragon Round that is not found in the book description.

SSP:  For me, it's a novel about faith in a world without gods.

TQ:  What sort of research did you do for The Dragon Round?

SSP:  When I was in junior high I read Piers Anthony's Macroscope and afterwards made a list of all the subjects I would have to master in order to write a novel of my own: astronomy, history, biology, anthropology, archaeology...basically the departments at a major university. I never managed that, but thanks to Wikipedia, YouTube and Google I might as well have. I don't think I could have written The Dragon Round without them either. I spent hours, for instance, learning about bamboo and crabs, but my favorite bit of research was on how to sex a dragon.

SSP:  Solet was the easiest. He's a scoundrel. I never knew what he'd do or say.

Jeryon was the hardest because I saw the story through his eyes. About halfway through, probably because I had to look at him through the poth's eyes, I realized I'd never seen him from the outside. I knew how he thought and felt, and I knew what he wanted, but not why he was the way he was. It was a lot of fun discovering his back story and bringing that in.

SSP:  I didn't want to write another fantasy in which someone saves the world for feudalism. So I set it in an analog of our own world, which is why Hanosh is a corporate oligarchy, specifically the world as Milton Friedman would have it, in which profits must come before people.

The funny thing is, by laying me off, then providing a very generous severance package, Wiley provided both the impetus and the means to write the book.

TQ:  Which question about The Dragon Round do you wish someone would ask? Ask it and answer it!

In the meantime, here are two questions:

Q. Why do your paragraphs have fewer than 150 words?

A. When Vonnegut was in marketing at GE, he learned that the American attention span was 45 seconds long, so he made sure his paragraphs could be read in less time. I'm doing the same thing. It takes about 45 seconds to read 150 words.

One thing I couldn't do in this book was limit the length of my chapters. About halfway through, I did a little study of bestselling fiction, looking at books by Patterson, King, Evanovich, Dan Brown and others, and found that, when taken together, their average chapter had 1770 words. I may try to incorporate that stricture into future books.

Q. Where did the poth's name come from?

A. The song "Everlyn" by Somebody Still Loves You, Boris Yeltsin. The band tweeted me that they were all for this when I tweeted the hivemind to ask whether her name should be that or Asper (who became the White Widow).

BTW, In looking for that video, I discovered there's now a band called Everlyn, and they are pretty great too. Check out Away We Go.

TQ:  Give us one or two of your favorite non-spoilery quotes from The Dragon Round.

SSP:  It makes no sense out of context, but the one I say most to myself when no one is around is the poth's, "It's kitties!"

I also like how characters interpret the phrase "the wave rises, the wave falls" in their own ways.

SSP:  I'm about to start the first draft of The Dragon Tower, which I want to have done by July 1. I'd like to get through the second and third outlines of the first "Dragons of America" novel, so I can start drafting that while revising The Dragon Tower. And I'll write some stories in there, maybe expand my story "The Revivalist" into a novella, and finally draft another novella I've already outlined called "The Dragon Knight's Daughter."

So much for prioritizing. 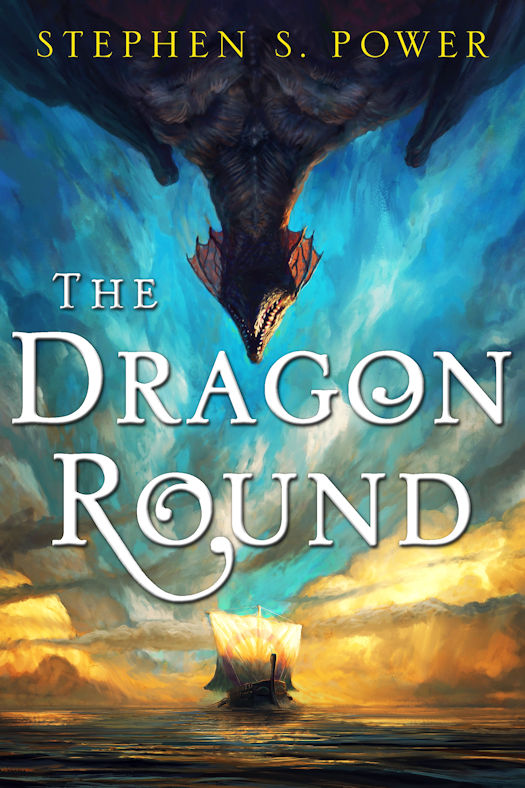 A swashbuckling adventure with a dark side for fans of George R.R. Martin and Naomi Novik—when a ship captain is stranded on a deserted island by his mutinous crew, he finds a baby dragon that just might be the key to his salvation…and his revenge.

He only wanted justice. Instead he got revenge.

Jeryon has been the captain of the Comber for over a decade. He knows the rules. He likes the rules. But not everyone on his ship agrees. After a monstrous dragon attacks the galley, the surviving crewmembers decide to take the ship for themselves and give Jeryon and his self-righteous apothecary “the captain’s chance”: a small boat with no rudder, no sails, and nothing but the clothes on his back to survive on the open sea.

Fighting for their lives against the elements, Jeryon and his companion land on an island that isn’t as deserted as they originally thought. They find a baby dragon that, if trained, could be their way home. But as Jeryon and the dragon grow closer, the captain begins to realize that even if he makes it off the island, his old life won't be waiting for him and in order get justice, he’ll have to take it for himself.

From a Pushcart Prize–nominated poet and speculative short story writer, The Dragon Round combines a rich world, desperate characters, and gorgeous, literary fiction into a timeless tale of revenge.

Stephen S. Power's short fiction has appeared at AE, Daily Science Fiction, Lightspeed, Nature, and many other venues. A Pushcart Prize nominee, he’s also published more than seventy poems in journals such as Clarion, The Lyric, The Iron Horse Literary Review, Measure and Raintown Review.  And as a veteran book editor he's worked on numerous bestsellers. The Dragon Round is his first novel. He tweets at @StephenSPower, his site is StephenSPower.com, and he lives in Maplewood, New Jersey.