Interview with Michelle Pretorius, author of The Monster's Daughter


Please welcome Michelle Pretorius to The Qwillery as part of the 2016 Debut Author Challenge Interviews. The Monster's Daughter will be published on July 19th by Melville House. 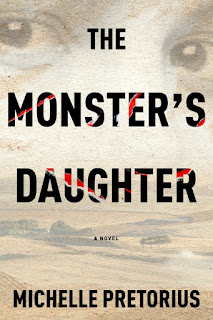 Michelle:  I started writing later in my life. I needed a change of direction, but didn’t quite know what to do, so I took a writing class and loved it. I always loved school so I decided to apply to an MFA program and got in. I realized that I had always had these story ideas, but didn’t know how to craft them into a novel. I guess that’s the value of formal writing training to me – it taught me to recognize good story ideas, and how to use them.

Michelle:  Definitely a pantser. I like to go on a journey with my characters, throw them in a situation, and see what happens. Writing a novel takes a long time, and new events and experiences are constantly influencing the way I think about the plot and characters. I had a vague idea where I wanted the novel to end when I started writing it, but no idea how I would get there. I sometimes had nightmares about tying up all the narrative threads I had introduced. I ended up changing major plot points several time along the way as I discovered new things in my research. Many times meeting a new person, or a small incident observed on the street, would change the way I saw a character or plot point in the novel. You always have to leave yourself open to the possibility of change while writing. I admire people who can plot out a whole novel before writing it, but for me it would dull the excitement of discovery.

Michelle:  To recognize that it is work, hard work, and that inspiration is a very small part of the process. To sit down every day, get rid of all the doubts and excuses, and put words to paper, no matter what, is always a challenge. I have to have a routine. I also have to remind the little perfectionist on my shoulder that this first draft doesn’t matter. That I can rework it and change it before anyone sees it. It’s always easier to make a draft better once you have something to work with, but getting that first draft out is a difficult process. Writing is about making decisions, decisions about your characters, setting, plot, etc. and you have to get rid of the notion that there is only one right answer and that you cannot go back and change it. I cut or rewrote almost as many pages as have remained in the final draft of The Monster’s Daughter, and it was sometimes tough to let them go, but I have to admit that the book is definitely better without them.

Michelle:  I try to read a lot and about a variety of subjects. I obviously love reading fiction, especially crime novels, but I’m also very interested in science and history. I love it when seemingly disparate elements converge in a novel and the expectation of genre lines gets blurred. Place is also a strong factor. I didn’t really have a clear sense of the story I wanted to tell until I visited friends who live in the mountains on a very isolated farm in South Africa. All of a sudden I could see this germ of an idea that I’d been carrying around for a while take root in this environment.

TQ:  Describe The Monster's Daughter in 140 characters or less.

Michelle:  Constable Alet Berg discovers a burned body on an isolated South African farm and discovers how her own past is connected to the murder.

TQ:  Tell us something about The Monster's Daughter that is not found in the book description.

Michelle:  History shapes our lives, the way we exist in the present, and interact with the people around us, whether we realize it or not. The Monster’s Daughter takes its characters, and us as readers, on a journey to discover that past, so that we may understand how we are connected to it in the present.

TQ:  What inspired you to write The Monster's Daughter?

Michelle:  I grew up in apartheid-era South Africa which meant that the government controlled information in the media and censored all reading materials and information. History lessons in school were skewed towards the religious justification of white rule. Once I left South Africa, I realized that I didn’t know very much about my country’s real history. I started doing a lot of reading on the subject, and the more I read, the more upset and ashamed I became. I wanted to tell the story, not as a history lesson about people in power, but as a piece of fiction from the perspective of the people who lived under apartheid, both black and white. Fiction has the ability to create empathy because it puts you in the head of another person. I wanted to use this powerful tool as a way of exploring the past with my reader, a way of understanding the people of the country’s beliefs, motivations, experiences, and suffering.

TQ:  What sort of research did you do for The Monster's Daughter?

Michelle:  I did a lot of reading! Many books on the subject were out of print, so I owe a great debt to libraries for finding them for me. I went to South Africa to experience specific places and the people of the areas I was writing about, and to find other sources that were only available in Afrikaans and therefore impossible to find in the US. I also watched many documentaries about the country, both historical and investigative. Apart from the history, I had to research genetics, medical technology, vigilantism, necklacings, burn pathology, interrogational torture techniques, aging, crime, camphor poisoning, and host of other things that would probably make strangers looking at my browsing history very suspicious.

TQ:  In The Monster's Daughter who was the easiest character to write and why? The hardest and why?

Michelle:  Alet and Mathebe were both easy to write. Once I had a clear idea of who they were, they just took over. I believe that all characters are rooted in the personality and views of the author, there’s no getting away from it. Even though the two of them seem very different, they have a lot in common as well. When I have difficulty writing a character, I know it’s because I am only thinking about their function in the story, and haven’t envisioned them as real people yet. In the beginning of writing the novel, I had some trouble writing the black characters, not because I didn’t think of them as real people, but because I desperately wanted to get it right and do them justice. The fear of getting it wrong almost crippled my writing. I had to remember that, even in a world where difference is constantly being put under a microscope, people are a lot more alike than different.

Michelle:  It is impossible to write honestly about South Africa without including the issue of racism and the aftermath of colonization. They are pervasive elements in the country’s history and part of the root cause of its current social problems. I wanted to understand why and how apartheid happened, and also what its legacy is for the people of the country. South Africa is a great setting for a crime novel, but I wanted the solving of that crime to be a vehicle for addressing the larger picture of what is happening in the country, and to some extent in the world at large.

TQ:  Which question about The Monster's Daughter do you wish someone would ask? Ask it and answer it!

Michelle:  Why I chose to include a science fiction aspect in the novel.

As I mentioned, I’m fascinated by science, especially genetics. I’m a big science fiction fan, although I tend to gravitate towards “mundane” sci-fi. I like the idea of speculative fiction that can, by some strange twist of circumstances, or further research and understanding, become reality. To discuss the issue of apartheid and race, I wanted to have characters that could bear witness to the century unfolding, that were present as history made its twists and turns. To bring the issue of race into the fold, I wanted them to actually be superior humans, whereas the white South Africans only believed themselves to be. And so, Tessa and Benjamin were born, not through the specific intent of a mad doctor, but because of a strange confluence of events that were beyond human control.

TQ:  Give us one or two of your favorite non-spoilery quotes from The Monster's Daughter.

Michelle:  “Johannesburg hazed like a gray dream in the late afternoon, a smoky mirage. Around Tessa, lines of color divided the masses of people trying to eat, breathe, and live, going home to separate areas. Would it fall one day, this city of Gomorrah? Would she alone be standing at the end, eternally a child, and know the truth about misery and the consequences of hate? See the result of their toils, of their poverty, of their greed, while they lived only for what today offered? The loneliness of that future ripped at her.”

Michelle:  I’m busy researching and writing a second novel, a sequel if you will. The Monster’s Daughter dealt with over a hundred years of history, primarily investigating the how and why of apartheid. For the second novel, I’d like to focus on what happened post-apartheid. The New South Africa showed so much promise in 1994, but twenty-two years later, the same social inequalities are still present in the country, along with increasing violent criminality. I think the why and how of that is worth exploring further.

Michelle:  Thank you so much for having me! 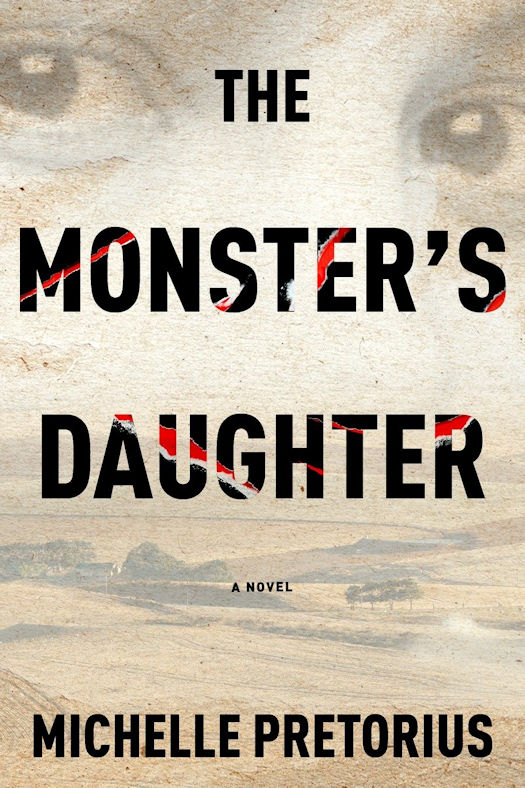 Somewhere on the South African veld, 1901: At the height of the Boer War, a doctor at a British concentration camp conducts a series of grim experiments on Boer prisoners. His work ends in chaos, but two children survive: a boy named Benjamin and a girl named Tessa . . .

One hundred years later, a disgraced young police constable is reassigned to the sleepy South African town of Unie, where she makes a terrifying discovery: the body of a young woman, burned beyond recognition.

The crime soon leads her into her country’s violent past—a past that includes her father, a high-ranking police official under the apartheid regime, and the children left behind in that long-ago concentration camp.

Michelle Pretorius’s epic debut weaves present and past together into a hugely suspenseful, masterfully plotted thriller. With an explosive conclusion, The Monster’s Daughter marks the emergence of a thrilling new writer. 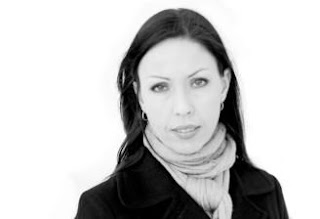 MICHELLE PRETORIUS was born in Bloemfontein, South Africa. She has written for Bookslut, Word Riot, and the Copperfield Review, among other publications. She received an MFA in Fiction Writing from Columbia College Chicago and is currently a PhD student at Ohio University.