Please welcome K.S. Merbeth to The Qwillery as part of the 2016 Debut Author Challenge Interviews. Bite was published on July 26th by Orbit. 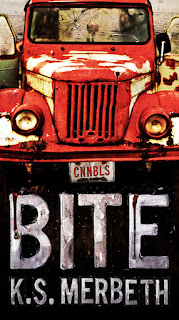 KSM:  Hi, thanks for having me! I’ve been writing as long as I can remember. As a kid I always had my face in a book and dreamed about being an author someday. I started writing my own stories in elementary school, and never stopped. My head is always full of ideas and characters and plots. I feel like I need to get them down on the page for my own peace of mind.

KSM:  I’m a hybrid. When I first get an idea, I like to jump right in while I’m excited about it. After I word-vomit out the first few chapters, I pause and figure out where I’m going with it. As far as plotting, I use what I’ve heard called the “road trip” technique. I like to know where the story begins, where it ends, and some of the major stops along the way, but I figure out everything else as I go. It helps me maintain the sense of adventure while preventing me from getting lost.

KSM:  The hardest thing for me is sticking with one idea. I have a long list of stories I’d love to write, and my brain would gladly jump around writing bits and pieces of each, but I’d never get anything finished that way. I’ve become a lot more disciplined over the years, but new ideas are still very tantalizing.

KSM:  Mostly, I just try to write the kinds of books I’d want to read – and I’m a picky reader. I like to be surprised. I like things that are fresh and different and thought-provoking. I like complicated morality and main characters who aren’t really “heroes” in a traditional sense. Whenever I’m reading, or watching a movie, or playing a game, I’m always thinking about what is working or not working for me in the story, and I bring that with me whenever I sit down to write.

KSM:  In a brutal desert wasteland, a girl finds a family in a crew of outlaws, and they cause a shitload of trouble.

TQ:  Tell us something about Bite that is not found in the book description.

KSM:  While there’s a lot of violence and grit and horror in Bite, there’s also quite a bit of humor! Of course it’s very dark humor that mostly revolves around cannibalism and similarly unsavory topics, but still, I think the story will get more than a couple laughs out of readers.

TQ:  In the About section on your website (here) you say that Bite is, in part, "...inspired by my love of villains... ." Who are some of your favorite villains? What else inspired Bite?

KSM:  Ooh, there are so many! I love Harley Quinn and the Joker, Bellatrix Lestrange, Gogo Yubari, Negan from the Walking Dead... I have a soft spot for female villains, and for villains that are both evil and funny. As far as other inspiration, I really love the post-apocalyptic setting, but I wanted to take it in a direction that hadn’t been explored before. It’s a setting ripe for violence and villainy, and as soon as I started to wonder about the “bad guys” in such a bleak world, the story began to come together.

TQ:  What appeals to you about writing post-apocalyptic SF?

KSM:  I love the gritty, high stakes nature of the setting. The world has fallen apart, civilization has collapsed, and everyone is doing whatever they can to survive. In a world like that, you can really dig into the darker parts of human nature and explore exactly how far people will go to stay alive.

TQ:  What sort of research did you do for Bite?

KSM:  I did a lot of research into how people would survive in a post-apocalyptic wasteland. Growing up in Arizona, it wasn’t too hard to imagine the desert-like setting and what kind of survival challenges it would pose, but I wanted to include as much realism as I could. I researched things like heatstroke and dehydration, the longevity of various kinds of canned food, and how water would be purified.

TQ:  In Bite who was the easiest character to write and why? The hardest and why?

KSM:  Kid was the easiest to write. Her voice came really naturally – in part, I think, because her narration is so deeply entwined with the story in my mind. Bite wouldn’t be the story that it is without Kid telling it. I also relate to her because she’s not some badass or killing machine. She’s just a girl who’s figuring out where she belongs in the world.

The crew’s leader, Wolf, was the hardest for me. He wasn’t difficult to write on a surface level, but it was harder to figure out who he is beneath all the profanity and ridiculous one-liners, and harder still to get him to show it a little over the course of the book.

TQ:  Which question about Bite do you wish someone would ask? Ask it and answer it!

Q: Have you ever drawn inspiration from an unexpected source?

A: What a coincidence, this sets me up perfectly for a story I’ve been dying to tell! ;)

Early into the first draft of Bite, I was working on it at home. I had put Kid in a pretty shitty situation – dying of dehydration and separated from most of the crew – and was puzzling over how to get her out of it. While I was brainstorming, my little brother (who was 12 or 13 at the time) asked me what I was working on. I gave him a quick run-down, and he listened and nodded and advised, in a very serious voice: “You should put a lizard in it.”

And, just like that, I knew how to write myself out of the corner I was stuck in. Thanks, Lucas!

TQ:  Give us one or two of your favorite non-spoilery quotes from Bite.

“Is that a map?” I ask. I can’t read a word of it, but I recognize the shapes of mountains and roads.
“Again with the stupid questions,” Wolf says. “Of course it’s a damn map. See, it’s got all the towns and shit.”
“Wow.” This piece of paper holds more of the world than I’ve ever seen, not that it means much. Before I left town, I knew other places like it existed, but certainly not their locations or names. “You guys made this?”
“Got it off a caravan,” Pretty Boy says.
“So you stole it?”
“It doesn’t count as stealing if they’re dead,” Wolf objects.
“I think it still counts if you killed them for the map…”
“I never said we killed them,” he says. “And no. That would count as looting, ain’t that right?”
“Isn’t that worse than stealing?”
“Whatever.”

KSM:  Expect a sequel to BITE next year! 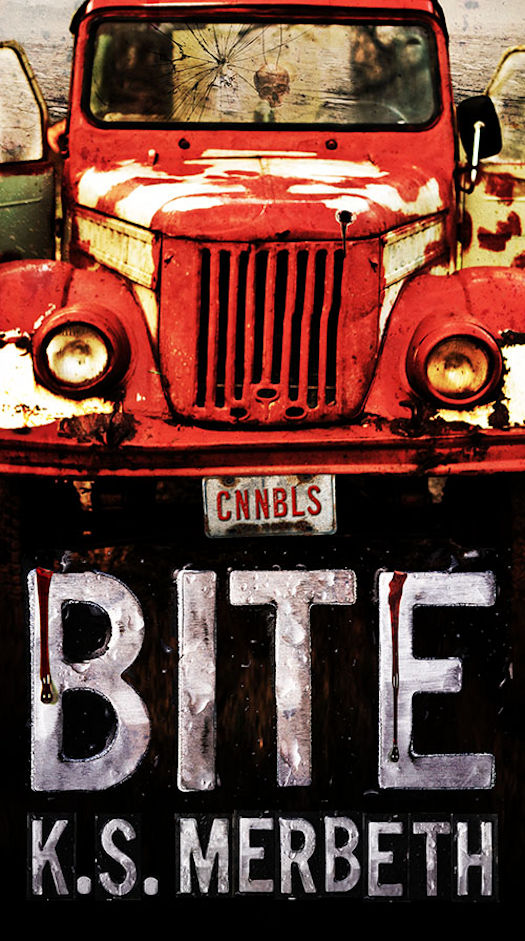 Kid is trying to survive in a world gone mad.

Hungry, thirsty and alone in a desert wasteland, she's picked up on the side of the road by Wolf, Dolly, Tank and Pretty Boy - outlaws with big reputations and even bigger guns.

But as they journey across the wild together, Kid learns that her newfound crew may not be the heroes she was hoping for. And in a world that's lost its humanity, everyone has a bit of monster within them...

Debut author K.S. Merbeth is obsessed with SFF, food, video games, and her cat and resides in Tuscon, Arizona.