Interview with Jen Williams, author of The Copper Promise


Please welcome Jen Williams to The Qwillery as part of the 2016 Debut Author Challenge Interviews. The Copper Promise was published on July 5th in North America by Angry Robot. 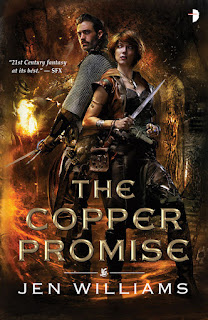 Jen:  Like most writers, I’ve been writing for about as long as I can remember – the first Christmas and birthday presents I can remember asking for were a typewriter and a desk (nerdy child, nerdy grown-up). I wrote a number of grim short stories as a young adult, usually involving someone getting eaten by cats at the end, but never thought I had the stamina to write a book. One day in my early twenties I came home from a particularly rubbish day at work and decided that to make myself feel better, I would write a scene that had been hanging around in my head for weeks. The scene grew, and spawned other scenes, and after about a year and a half I had a book. A terrible, wonky mess of a book, but still. From then on writing books was all I wanted to do.

Jen:  I tend to start with a very rough plan, and a lot of detailed character notes. My books are very character driven, so for me the most important starting point is knowing everything I can about them, and I like to have some idea of how they change over the course of the story. From there though, I let the first draft guide me, and often the final draft barely resembles the plan I started with. I recently took down the planning post-its from my corkboard for a new novel I’m writing called The Ninth Rain, and as I read them back I was amused by how much of my plan never made it into the book.

Jen:  Maintaining stamina, I think. Writing a novel is a marathon rather than a sprint, and it involves a lot of work over a long period of time, and often throughout a lot of that time you are very unsure of what you are doing. I usually have a crisis of confidence about halfway through the first draft, and it can be very hard to throw yourself back into the work when you know you’ve still got a very long way to go. However, I’ve learnt that this period of uncertainty pops up with every book, and I’ve started to get quite good at ignoring it. In the end, writing a book requires you to be incredibly stubborn in a lot of ways, and that’s certainly a character trait I have.

Jen:  This is always a tricky question to answer, because I think often the things that really influence us slip under our skin and become invisible threads holding our work together – they’re there, and they’re vital, but they’re very difficult to see. Certainly Terry Pratchett has been a big influence. When I was a young person, the Discworld was fantasy to me, and those books taught me how important humour is. Likewise, reading Stephen King as a kid instilled in me the idea that readability is key – you want the reader to come on a journey with you, so don’t make it difficult for them. The Copper Promise was specifically influenced by Fritz Leiber’s Fafhrd and the Gray Mouser stories (the book is essentially a love letter to that sort of sword and sorcery) and the video game Dragon Age. I hadn’t written any ‘traditional’ fantasy for a long time, and Dragon Age gave me a kick up the butt, while reminding me that it’s totally possible to write funny modern fantasy that also features dungeons and dragons.

TQ:  Describe The Copper Promise in 140 characters or less.

Jen:  A pair of mercenaries accidentally awaken an elder god bent on destroying the world. And then things get worse.

TQ:  Tell us something about The Copper Promise that is not found in the book description.

Jen:  The dragon/elder god has a bunch of minions called the brood army. They are murderous dragon women, who cause all sorts of trouble, but also go through a sort of identity crisis…Huge fun to write, but very tricky to squeeze into the blurb.

TQ:  What inspired you to write The Copper Promise? What appeals to you about writing Fantasy?

Jen:  I wanted to write something that had all the stuff I’ve always loved about fantasy – adventure, wild magic, outlandish monsters, dungeons, flashy weapons etc. Basically, I wrote it to please myself. I’ve always loved fiction that transports the reader to an entirely new world, and fantasy is the genre where you can take that to its extreme. I love creating new worlds, new histories and then exploring them.

TQ:  What sort of research did you do for The Copper Promise?

Jen:  I sampled a lot of mead. Does that count?

TQ:  In The Copper Promise who was the easiest character to write and why? The hardest and why?

Jen:  Wydrin, the wisecracking rogue, was certainly the easiest to write. Her voice has always been very clear to me, and it’s just a case of being quiet and listening to her. Sebastian, the knight who is her business partner and closest friend, was much trickier. Seb has a lot of internal conflicts; deeply honourable and kind, he also has a lot of reasons to be very angry. Seb’s journey through the books is not a straightforward one, and it was always important to me that although he makes some bad decisions, it’s vital that the reader understands why he makes them, and feels empathy for him.

TQ:  Which question about The Copper Promise do you wish someone would ask? Ask it and answer it!

Q: Which bit of The Copper Promise always makes you smile when you read it?

A: Ah well, I’m so glad you asked that! There’s a scene where Wydrin forces Lord Frith to jump from the top of a tower, and it makes me laugh every time. That sounds pretty weird out of context, but honestly it amuses me so much.

TQ:  Give us one or two of your favorite non-spoilery quotes from The Copper Promise.

‘I changed my mind. It’s been a slow morning and I am easily bored. You, fresh meat. Would you like to die first?’ She held up one of her daggers, showing it to the youngest guard. ‘This one is called Frostling, and the other is Ashes.’
‘That’s the Copper Cat,’ he blurted. ‘She’ll kill us all, and take our bodies back to Crosshaven to feed to the Graces!’
Triumphant, Wydrin turned to smile at Sebastian.
‘And you said that rumour wouldn’t stick –‘

Jen:  Currently I’m in the middle of writing the first book of a new trilogy. It takes place on an entirely new world, with new characters, and so far it’s been a lot of fun. The first book is called The Ninth Rain. 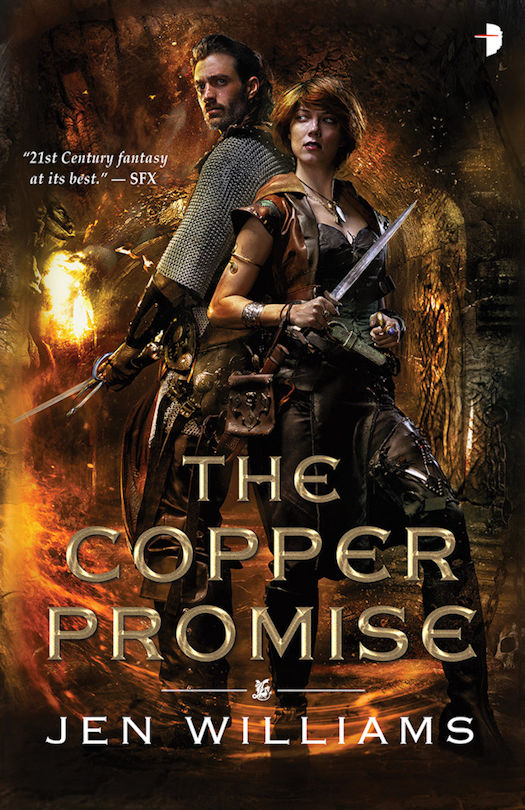 There are some tall stories about the caverns beneath the Citadel – about magic and mages and monsters and gods.

Wydrin of Crosshaven has heard them all, but she’s spent long enough trawling caverns and taverns with her companion Sir Sebastian to learn that there’s no money to be made in chasing rumours.

But then a crippled nobleman with a dead man’s name offers them a job: exploring the Citadel’s darkest depths. It sounds like just another quest with gold and adventure … if they’re lucky, they might even have a tale of their own to tell once it’s over.

These reckless adventurers will soon learn that sometimes there is truth in rumour. Sometimes a story can save your life.

File Under: Fantasy  [ Beware of the Gods | Dungeon Crawlers | The Brood Rises | Prince of Wounds ] 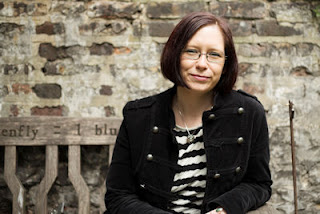 Jen Williams lives in London with her partner and their cat. She started writing about pirates and dragons as a young girl and has never stopped. Her short stories have featured in numerous anthologies and she was nominated for Best Newcomer in the 2015 British Fantasy Awards.


Note: The Copper Cat series is published in the UK by Headline. The 3 novels are already published there.