Please welcome Julia Verne St. John to The Qwillery. The Transference Engine was published by DAW on July 5th. 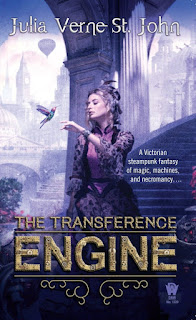 Julia:  I find the actual typing of the story the biggest challenge. My mind is running so fast my fingers can’t keep up. Often times, I have jumped ahead two or three scenes and end up typing dialog in the wrong place, action in rooms we haven’t entered yet, working with characters I haven’t introduced yet. Thankfully we have word processors and it’s relatively simple to cut and paste, insert the right scene and setting. My rough drafts tend to be short, incomplete, out of order and ugly. Subsequent drafts straighten out the mess.

Julia:  Probably a hybrid. I have to do some prewriting. Usually I sell on a synopsis and three chapters. A synopsis needs to have a beginning, middle, and end. This is a good way to find out if a premise does make a story. It doesn’t always happen. I’d rather find this out at the synopsis level than half way through the book. Unlike some authors I need to know the ending so I have something to work toward. The synopsis is a skeleton of a story rather than a complete outline. The fun part is filling in the flesh and texture. Sometimes I have to discard the synopsis entirely half way through a book. This results in a flurry of phone calls to agent and editor who have been working behind the scenes on marketing and such based upon the original synopsis. But after thirty + books I’ve learned to make the synopsis better and workable.

TQ:  Describe The Transference Engine in 140 characters or less.

Julia:  Madame Magdala claims to be the bastard daughter of a Gypsy king, presides over a demimondaine salon, and runs an international network of spies in Victorian England.

TQ:  Tell us something about The Transference Engine that is not found in the book description.

Julia:  The character of Madame Magdala sprang from The Shadow Conspiracy anthology published by Book View Café. As co-editor I was in on the brainstorming for the shared-world anthology. The moment we decided to insert the Bookview Café as headquarters for the spy network seeking out evidence of a conspiracy to insert life-like automata into places of power with Lord Byron jumping from human body to automaton leading the way, I knew that I had to write the story of the woman in the corner reading the tea leaves. She ended up re-inventing herself as I wrote. She does that periodically.

TQ:  What sort of research did you do for The Transference Engine?

Julia:  Like most of my historicals I started with a biography of a prominent person in the period, in this case Queen Victoria. There was a lot of tension and family conspiracies to keep her off the throne, or to accept a full regency. She’d been raised very much in isolation and was virtually unknown to both the people and the government that an assassination attempt at her coronation seemed inevitable. From there I read up on Ada Lovelace and her mother, the Reform Act of 1834, and the development of the Leyden jar, a primitive battery. Spot research on costumes, carriages, the working principles of steam engines and clockwork devices. I start with generalities and move to specifics and let the plot dictate where to search.

TQ:  The Transference Engine is Alternate History/Steampunk set in Victoria London. In your opinion what is the appeal of Steampunk?

Julia:  Steampunk started as a movement among costumers and took on a life of its own. There is a romance—in the grand literary tradition not bodice rippers—with elegant costumes that flow into the craftsmanship of steam engines, weapons, and furniture. The gilt and decoration are a seamless part of functionality. And since this is alternate history, the women don’t have to stay home and flutter their fans waiting for the men to return from their adventures. The woman can scythe their way through jungles, fly dirigibles, and fix the bloody engines, all while wearing a smart costume and a corset. The corset has become an essential accessory. The stays can become weapons and tools, the garment itself is protection from unwanted advances, and support for a tired back after hacking a path through the wilderness. Equality, elegance, and adventure. What more can you ask for.

TQ:  Which question about The Transference Engine do you wish someone would ask? Ask it and answer it!

Julia:  Can Madame Magdala’s relationship with Sir Andrew Fitzandrew survive the mistrust raised between them?

I don’t think their relationship will survive as is. But I think they can rebuild it from the ground up. It will be hard and probably take two or three more books to find a new and stronger trust between them.

TQ:  Give us one or two of your favorite non-spoilery quotes from The Transference Engine.


I kept a neat kitchen, but no order survives the first onslaught of sifted flour and sugar. Butter and cream, cheeses and herbs, fruits and glazes, all my ingredients came readily to hand. I fell into a soothing rhythm combining them in proper ratios, losing myself in recipes based upon my mother’s confections that I’d perfected for British tastes. Modern scientists extolled the virtues of coal-fired steam ovens that added moisture and an even baking temperature. While I embraced much of the new technology, properly banked coals from a wood fire still suited my baking best.

TQ:  Do you have any favorite Steampunk novels?

Julia:  Anything by Tina Connolly.

Julia:  My next book is a contemporary fantasy about a suburban sorceress. She’s a kitchen witch and a ballet mom with three adolescent children and an ex husband who turns out to be the Sheriff of the International Guild of Master Wizards. All in normal suburbia. I also have five proposals circulating in New York. The one I really want to sell first is a YA historical fantasy. I love writing contemporary novels, but my heart is in the historicals. If The Transference Engine sells well enough, I really want to explore more of Magdala’s world and her loves. 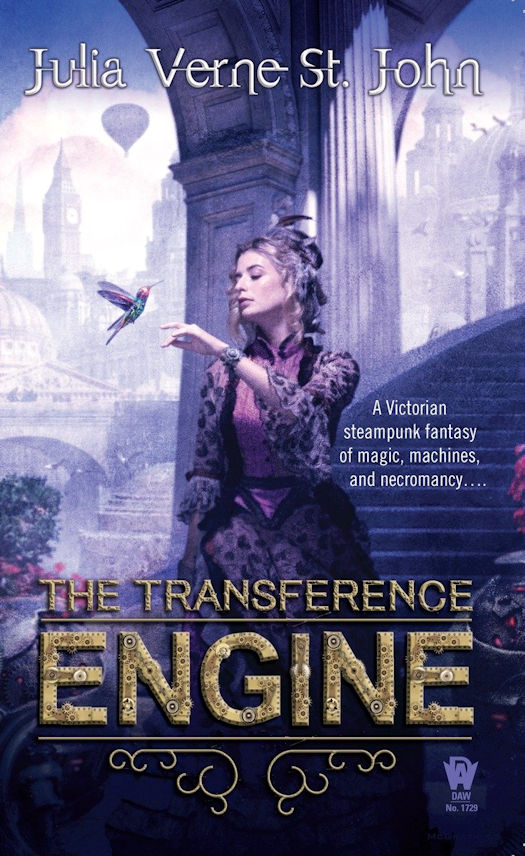 Madame Magdala has reinvented herself many times, trying to escape Lord Byron’s revenge. She destroyed the Transference Engine Byron hoped to use to transfer his soul into a more perfect body and perpetuate his life eternally. A fanatical cult of necromancers continues Byron’s mission to force Magdala and Byron’s only legitimate child–Ada Lovelace–to rebuild the machine and bring Byron back.

Magdala now bills herself as the bastard daughter of a Gypsy King. She runs a fashionable London coffee salon and reading room while living a flamboyant lifestyle at the edge of polite society. Behind the scenes, she and Ada Byron King, Countess of Lovelace, use the massive library stored at the Bookview Cafe to track political and mercantile activity around the world. They watch to make certain the cult of necromancy surrounding Lord Byron, the poet king who worshipped death, cannot bring him back to life.

On the eve of Queen Victoria’s coronation in June of 1838, rumors of an assassination attempt abound. Both the Bow Street Runners and Magdala’s army of guttersnipe spies seek to discover the plot and the plotters. Who is behind the mysterious black hot air balloon that shoots searing light from a hidden cannon, and who or what is the target? And who is kidnapping young girls from all walks of life?

Desperately, Magdala and her allies follow the clues, certain that someone is building a new Transference Engine. But is it to bring back the dead or destroy the living?

Some thoughts: The Transference Engine is set in Victorian London as the beginning of Queen Victoria's reign. It features historical figures including Charles Babbage and Lord Byron's daughter, Ada Lovelace, as well as others. There is evil afoot! Lord Byron was a necromancer whose followers believe that his soul lives on despite his death in Greece. He needs a new body to come fully back to life and he needs someone to rebuild the Transference Engine. Madame Magdala, the central character, has to protect Queen and country in an inventive and intricate plot that shows the murkier sides of London and the fortitude of one woman in the face of seemingly insurmountable odds. Magdala is not only intelligent and a smart businesswoman, she looks out for those less fortunate and seeks to improve the lives of those around her. She is a chameleon moving easily from high society to the worst parts of London to gather information and protect those in her care. As befits a Steampunk novel, The Transference Engine features some outstanding contraptions and imaginative science. However the story did bog down a bit here and there. Less description and musing and more action would have moved the story along. Overall The Transference Engine is a fun read and one that fans of Steampunk should check out.

Julia Verne St. John fell in love with British History when just a tot and she caught a glimpse of Queen Elizabeth II on a visit to the U.S. With a B.A. in history tucked under her arm, she has since studied many aspects of the subject. Steampunk offers her a wonderfully romanticized opportunity to experiment with costumes and play with the amazing “what if” scenarios of alternate history.

What:  One entrant will win a Mass Market Paperback copy of The Transference Engine by Julia Verne St. John from the publisher. US ONLY

Who and When:  The contest is open to all humans on the planet earth with a US mailing address. Contest ends at 11:59 PM US Eastern Time on July 18, 2016. Void where prohibited by law. No purchase necessary. You must be 18 years old or older to enter.