Review: The Murder of Mary Russell by Laurie R. King 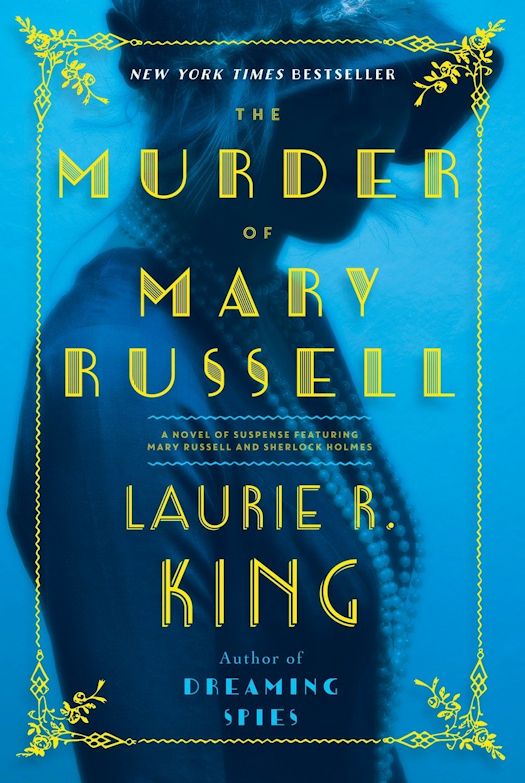 NEW YORK TIMES BESTSELLER • Laurie R. King’s Mary Russell–Sherlock Holmes series weaves rich historical detail and provocative themes with intriguing characters and enthralling suspense. Russell and Holmes have become one of modern literature’s most beloved teams. But does this adventure end it all?

Mary Russell is used to dark secrets—her own, and those of her famous partner and husband, Sherlock Holmes. Trust is a thing slowly given, but over the course of a decade together, the two have forged an indissoluble bond.

And what of the other person to whom Mary Russell has opened her heart: the couple’s longtime housekeeper, Mrs. Hudson? Russell’s faith and affection are suddenly shattered when a man arrives on the doorstep claiming to be Mrs. Hudson’s son.

What Samuel Hudson tells Russell cannot possibly be true, yet she believes him—as surely as she believes the threat of the gun in his hand. In a devastating instant, everything changes. And when the scene is discovered—a pool of blood on the floor, the smell of gunpowder in the air—the most shocking revelation of all is that the grim clues point directly to Clara Hudson.

Or rather to Clarissa, the woman she was before Baker Street.

The key to Russell’s sacrifice lies in Mrs. Hudson’s past. To uncover the truth, a frantic Sherlock Holmes must put aside his anguish and push deep into his housekeeper’s secrets—to a time before her disguise was assumed, before her crimes were buried away.

There is death here, and murder, and trust betrayed.

And nothing will ever be the same.

The Murder of Mary Russell is the 14th novel from Laurie R. King in the Mary Russell and Sherlock Holmes series which also includes several short stories. Because of that, I recommend that readers start with the first novel, The Beekeeper’s Apprentice.

For the most of the series, Mary Russell has been the narrator, with occasional chapters focusing on Sherlock Holmes in the third person. In The Murder of Mary Russell, King takes a huge step away from her former format and focuses on Clara Hudson, Holmes’ housekeeper. This not only is a departure in style, but also leads the reader to believe that Mary herself may be dead, ramping up the suspense.

The story starts innocently enough with Mary waiting at home for her husband, Holmes, to return, when a young man appears at the door looking for Clarissa Hudson, Mrs. Hudson’s apparent former name. Samuel Hudson claims to be her son and aims a gun at Mary. Then the story immediately changes and begins relating the history of Clarissa, alternating with Holmes’ desperate search for Mary and Samuel, after finding them missing with signs that one or the other is dead. Clarissa’s history changes a reader’s entire perception about the mild-mannered housekeeper and her role in Holmes’ life.

I absolutely loved this book. It probably is my favorite in the entire series and really breathes new life into not only the myth of Sherlock Holmes, but also King’s work. The story about a young poor girl masquerading as one of the ton, the aristocrats of the Victorian age, is slightly reminiscent of the old romance novels that I used to read as a teenager. But this one is darker, more vivid, and definitely more sinister. It also introduces a young Sherlock Holmes, just beginning his career as an investigator, and expands upon one of Sir Conan Doyle’s earliest mysteries.

Without giving away the secret of the title, I was thoroughly satisfied with the ending. King has revitalized her series. Where she goes from here is a mystery, but I will read anything else she writes, hoping it is half as good as The Murder of Mary Russell.