Interview with G.S. Denning, author of Warlock Holmes - A Study in Brimstone


Please welcome G.S. Denning to The Qwillery as part of the 2016 Debut Author Challenge Interviews. Warlock Holmes - A Study in Brimstone was published on May 17th by Titan Books. 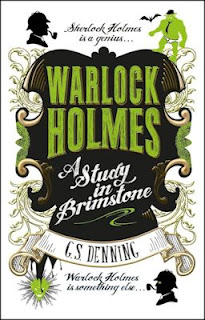 G.S. Denning:  Well, I started story telling in high school. I got hooked on improv theater, watching Whose Line is it, Anyway. I trained at Seattle Theatersports and Orlando Theatersports. I spent 15 years, making up 8 stories a night, on stage. I didn’t start writing until I moved to Vegas, lost my theaters and had to find some other way of getting it out of my system. So, if this book feels a bit like a big, long improv scene…now you know why.

GSD:  Ha! For this project, I’ve got the luxury of being neither. The outlines were all done for me, a hundred years ago, by a famous British dead guy. Honestly, if you want to learn to be a plotter, but aren’t good at making outlines, try a farce. Strip all the meat off a piece of classic literature and write on the bones.

But I guess I dodged the question a bit. I’m a hybrid writer, usually. I’ll get my setting, genre, characters and conceit out of the way (often a theme, too). Then I’ll plot a rough story with a definite end, sit in my chair and write. The middle is all pantsing, but since I’ve got so much to go on (and since I know where I’m going to), I’m never lost. Well… Rarely lost.

GSD:  Making sure I finish. I enjoy coming up with new characters and stories, but nobody wants to read half a book. I realized that, if I wanted to be a professional, I was going to have to see things through. One chilling example: there are 56 Sherlock Holmes short stories and 4 novels. If Warlock Holmes builds a fan base—if people keep buying the books—I realize I’ll probably wind up spoofing all of the originals. I’ve got a rough plot that stretches from Study in Scarlet to His Final Bow, but there’s a heck of a lot of writing in between. Looks like it would take roughly 8 books.

GSD:  Geek culture. I’m a life-long role playing game fan. I’ve been a console gamer since the original NES. I started loving anime when all we had was bootlegged, fan-subbed Akira. I’m an X-Files junky and a lover of Doctor Who, Red Dwarf, Black Adder and Monty Python (so, a bit of an Anglophile, too). The most direct influences on this work would be Douglas Adams and Terry Pratchett. They showed me that comic Sci-fi/Fantasy could be done and done well.

TQ:  Describe Warlock Holmes - A Study in Brimstone in 140 characters or less.

TQ:  After an abundance of mash-ups in 2009-11, the mash-up seems to have nearly gone the way of the dodo. What inspired you to mash up Sherlock Holmes with a bumbling alchemist?

GSD:  The name. Seriously, how has the pun Warlock Holmes been sitting on the table for a hundred years without anybody picking it up?

More directly, I was in a writing group with an author who was having real trouble with her protagonist. He was perfect, infallible, shiny hair, straight teeth and totally unlikeable. I encouraged her to give him flaws as serious as his powers and offered Sherlock Holmes as an example. She said a character like Sherlock could not be done in fantasy. On my drive home, I just started laughing. I’d realized how easy it would be to do a fantasy take on him—everybody thought he was magic, anyway. The writer’s job would simply be to let him be. Then I thought of the name pun. I started writing it that night. The first novella was done in a month and the rest is history.

TQ:  Tell us something about Warlock Holmes - A Study in Brimstone that is not found in the book description.

GSD:  Well… Here’s something: It’s built on the relationship of Holmes and Watson. I think all the good adaptations are. Mysteries are fun. Comedies are fun. Supernatural battle is a giggle. But the core of this story is two very different men who need each other and the friendship they form. My Watson is lost in the world. He thinks he’s smarter then everybody else and he’s sort of right, but he’s adrift. He’s hurt. He’s got no money. He’s got no friends. He’s got no purpose, nothing to fight for, nothing to get up in the morning for. Then he meets Holmes. It takes Watson about 2 seconds to figure out something’s really wrong with this guy, but the curiosity drives him closer.

As for Holmes, he’s a really good person—he’s the nicest guy you could ever ask to meet—but he does have problems. He’s riddled with demons. He’s in trouble with the law. He’s got a bunch of supernatural crimes to solve and he’s not a bright guy. He needs a friend to keep him stable, but it’s hard to keep a roommate when your walls are bleeding.

By the end of the first story, Watson has realized, “This guy is barely human, but he’s still a better man than I am. I’ve got to stay and help him.”

TQ:  What sort of research did you do for Warlock Holmes - A Study in Brimstone?

GSD:  Er… Not as much as I should have? Honestly, I’d watched Sherlock and House and some of the Jeremy Brett BBC series and the Robert Downey Jr. movies, but I’d only read a handful of the stories—only the ones I’d parodied in the first book. Then I got that call every author wants. Titan Books said they’d like to buy my novel. Oh, and two sequels. Oh, and an option on the fourth. And surely a Holmes expert like me was prepared to take this as far as it needed to go, yes? I had a vision for each story of the original cannon, didn’t I? Of course I did, I said, then hung up the phone, screamed “shiiiiiiiiiiiiiiiiiiiiiiiiit!” and ran out to buy the collected works of Sir Arthur Conan Doyle.

GSD:  The easiest was Torg Grogsson—my take on Inspector Tobias Gregson. He’s a big, angry battle-ogre and he’s very straight forward. Whenever I find myself at the keyboard thinking, “Hm… What would Grogsson do, here?” the answer is always something like “get mad and kick over a horse.” Well, ok. (Type, type, type.)

The hardest was actually Mrs. Hudson. Anybody doing a modern adaptation knows that Moriarty has got to be way bigger than he was in the originals. Same with Adler. But I was also coming to realize how much the fans loved Mrs. Hudson. And mine was…nothing. As in the originals, she was just there to take care of domestic needs, but she wasn’t much of a character. I was mulling this over and I saw the episode of Sherlock where Holmes says “Shame on you, Watson! Mrs. Hudson, leave Baker Street? England would fall!” To me, that was just a slap in the face. It was Holmes fandom, leaning out of my TV to say, “Wake up, Gabe, and give Hudson her due, or you don’t deserve to be writing this.”

So now, Hudson is their bane. Holmes and Watson face sorcerers, soul-binders, demons, murderers, monsters and replicants, but the thing they fear most is their mean little land-lady. She’s this heartless, withered, romance-novel fan (kind of a Victorian-Era porn-addict, really) and they just can’t deal with her.

TQ:  Which question about Warlock Holmes - A Study in Brimstone do you wish someone would ask? Ask it and answer it!

GSD:  I think the question I’d most like to hear is: “Dear Gabe, are you a sell-out? Follow up question: Would you accept this 15 million dollar check, for the film rights?”

TQ:  Give us one or two of your favorite non-spoilery quotes from Warlock Holmes - A Study in Brimstone.

Holmes: “Watson, if anyone calls and says they are the physical embodiment of Amon-Ra, I am not in!”


Holmes, on how he’s managed to disguise himself as a man with missing teeth: “Ha! The simplest illusion, Watson. I merely knocked them out with an ink blotter. They’re on my desk.”

GSD:  If things go well, I’ll be working on Holmes for quite a while. But I’ve started a series called “Tales from the Shitty Unicorn” about what it would be like to actually be in an RPG. Because seriously, who says, “Yes, I’d like to be a fighter, please. My ideal job description would be to stand up front, getting hit by ogres and chewed on by dragons, while other, smarter people stand back doing damage and trying to keep me alive—basically shielding me from the consequences of my poor life choices—until they can slay the monster. Any job openings?” The first book is a heist with fighter, cleric, wizard in place of con-man, safe-cracker, getaway guy. It’s called Elfheist. The second book, The Boogie-Woogie Bugle Bard of Company B is a World War Two movie, done in a fantasy setting. The third book is a spoof on fairy tales.

Oh, and I’ve got The Ballad of Bucky Deuce. It’s a YA novel—basically Romeo and Juliet, if the Montagues were the Indiana Joneses and the Capulets were mad scientists. Blade-fingered cyborg zombies and melt-o-rays meet high school romance. That one’s already written. Done, baby. In the can. Who wants it?

GSD:  Thanks for having me. I’m amazed at the volume and quality of work you guys put out and flattered that you asked me to be involved. I can hardly describe the warm wave of inclusion-fuzzy I am going to feel when I see this on your site. Thank you for taking an interest in me and Warlock Holmes. I’d like to also give my thanks to your readers and to my readers, for their time and fandom. 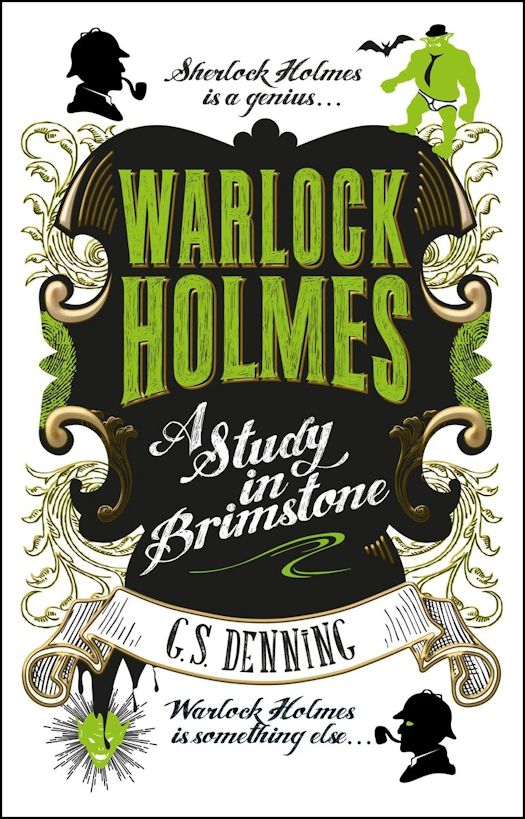 Sherlock Holmes is an unparalleled genius. Warlock Holmes is an idiot. A font of arcane power, certainly. But he’s brilliantly dim. Frankly, he couldn’t deduce his way out of a paper bag. The only thing he has really got going for him are the might of a thousand demons and his stalwart companion. Thankfully, Dr. Watson is always there to aid him through the treacherous shoals of Victorian propriety… and save him from a gruesome death every now and again. 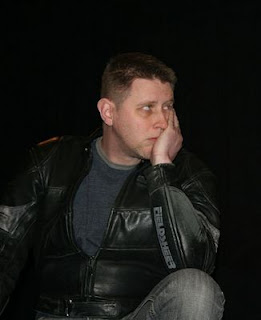 G.S. Denning was born in Seattle, Washington. He has published articles for games company Wizards of the Coast, worked as an editor, written a video-game script for Nintendo, and written and performed shows at the Epcot Center, Walt Disney World. With a background in improv, Gabe has performed with Ryan Stiles and Wayne Brady, and he currently has a play running in Seattle. He now lives in Las Vegas with his wife and two children.