Please welcome T.R. Ragan to The Qwillery with an excerpt from Furious, the first novel in the Faith McMann Trilogy, published by Thomas & Mercer. 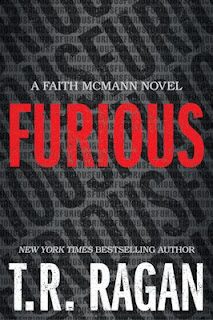 The kids unlatched their seatbelts, jumped out of the car, and ran through the garage and into the house before the song ended. Faith sang along until the last verse, then sat there for a moment and soaked in a little peace and quiet.

Her cell phone buzzed. It was her sister. “Hey, what’sup?” Faith asked.

“I’ll tell you what’s up,” Jana said. “Steve is driving me nuts! I quit drinking, I stopped devouring cake and cookies, but now he won’t let me lift anything heavier than a milk carton. This baby is going to be born stressed out if he doesn’t chill.”

Faith smiled. Her sister was a drama queen. “What time will you be coming tomorrow?”

“You have got to be kidding me,” Faith said. “You were supposed to make six dozen cupcakes. Do you know how much I still have to do before—”

Her sister’s laughter cut her off midsentence.

Faith sighed when she realized Jana had been joking about not making the cupcakes. “That’s not funny, Jana.”

“You’re such a dweeb. How could I possibly forget to make six dozen cupcakes when you’ve reminded me every single day for the past two weeks?”

“Wait—Have you told Craig the news?”

“He’s been busy with work—and, you know, bills stacking up, new tires for the car, busted water heater last month. I haven’t found the right moment to tell him about baby number three.”

“Don’t worry, I won’t.” Faith disconnected the call and was about to head off for the store when she remembered the grocery list hanging on the refrigerator. She left her purse in the car and climbed out. Weaving around toys and bikes, she headed through the garage door into the kitchen, where it looked as if a tornado had swept through the house. Kitchen drawers had been left open.

Papers and broken dishes were scattered across the floor.

Her heart raced. What is going on?

Just as she was about to call out her husband’s name, she stepped into the family room and saw Craig on the floor, bound and gagged.

A man she didn’t recognize hovered over him.

The scene before her made no sense.

Her heart pounded in her chest, making it difficult to breathe as her gaze darted around the room.

And then she spotted them.

Lara and Hudson sat together on the couch. Their hands had been duct-taped behind their backs. More duct tape covered their mouths. Another man stood close by, watching over them.

Time stopped as she tried to figure out what to do.

Craig always said they should buy a gun, but she didn’t want to keep one in the house. Eyes wide, she looked at the knife drawer. Grab a knife? Or run and alert the neighbors?

The two men exchanged a glance. Their eyes said it all.

She turned and ran.

If she could get inside the car and lock the doors, she could honk the horn or drive the car right through the wall and into the house if she had to. That might get one of the neighbors’ attention.

She flew through the back door leading to the garage and screamed at the top of her lungs before someone grabbed her from behind, twisted her around, and brought her face up close to his.

“I don’t know what you’re talking about,” she said as she struggled to get free.
He sneered. His eyes were bloodshot, filled with desperation.

He smelled of stale tobacco. Strong arms held her in place. She thought of every show she’d ever seen on getting away from an assailant, but fighting him was useless. “Let us go!” she cried.

He shook her hard enough to make her teeth rattle.

“You have five seconds to tell me where it is!”

This time when she screamed, she dug her heel into his foot and tried to twist out of his grasp.

He slammed her to the ground. Her head hit the cement floor, and her world turned black. 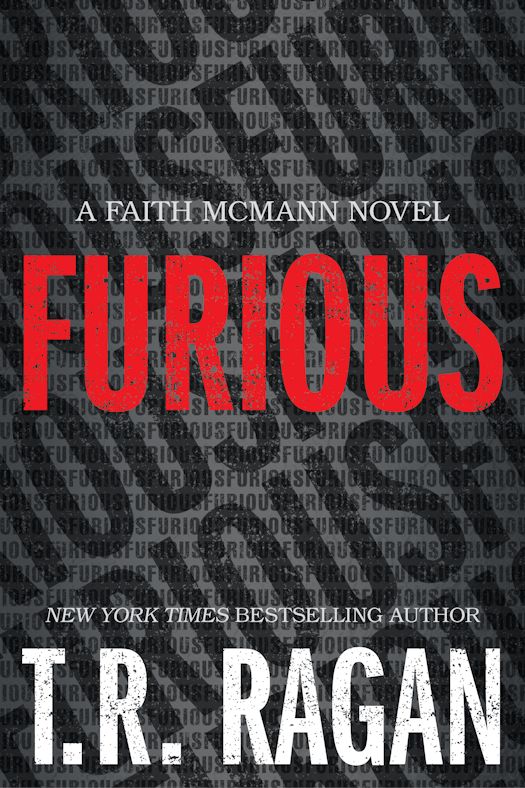 Faith McMann comes home to a nightmare: her husband is killed and her son and daughter are taken. Although the intruders leave her for dead, she survives. Crippling grief and fear for her children make life unbearable. Until her anguish turns to anger…and she trades victimhood for vengeance.

Frustrated with the law’s efforts, she takes action to rescue her children—and wreaks havoc on the brutal criminals who tore them from her. With her family and newfound allies at her side, Faith descends into the hellish underworld of human trafficking, determined to make those who prey on the innocent pray for mercy.

The forces she’s up against have already proven that their ruthlessness knows no bounds. And there’s nothing they won’t do to turn Faith’s crusade into a suicide mission. But they’re about to learn that nothing is more dangerous than a mother fighting for her children—especially one who’s earned the nickname Furious.

Theresa grew up in a family of five girls in Lafayette, California. An avid traveler, her wanderings have carried her to Germany, Ireland, the Netherlands, China, Thailand, and Nepal, where she narrowly survived being chased by a killer elephant. Before devoting herself to writing fiction, she worked as a legal secretary for a large corporation. Theresa and her husband Joe have four children and live in Sacramento, California.

FURIOUS, the first book in her most recent Faith McMann series was released March 22, 2016, followed by OUTRAGE and WRATH.

What:  One entrant will win a copy of Furious by T.R. Ragan from the publisher. US ONLY

Who and When:  The contest is open to all humans on the planet earth with a US mailing address. Contest ends at 11:59 PM US Eastern Time on May 12, 2016. Void where prohibited by law. No purchase necessary. You must be 18 years old or older to enter.