Please welcome Peter Tieryas to The Qwillery. United States of Japan was published in March by Angry Robot Books. 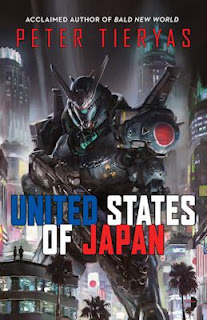 Peter:  Every story has a different challenge. With United States of Japan, many of the issues and ideas explored are still contentious in Asia, so I had to be extra careful with any of the speculative elements I took. That meant months of research, as well as continual editing and fact-checking to make sure I wasn’t getting battle names mixed up or chronologies twisted (unless that was an intentional choice meant to distort the past for propaganda reason).

I am definitely a hybrid of the two, though I do like to plot a lot before I go wild with the narrative and my drafts undergo a whole lot of revision. I’m always trying to improve my craft, the emotional connection with characters, and convey personality through dialogue as much as possible.

Peter:  Philip K. Dick is an obvious influence for United States of Japan. But I also draw on Pearl S. Buck’s The Good Earth and Rieko Kodama’s brilliant work on the Phantasy Star series as I love her storytelling in the Sega Genesis space operas. Food is also important in my books as I refer to Asian, American, and fusion dishes, adding in some of my favorite restaurants in the alternate history. So is music and the tracks that form the ambient choir for the strange adventure the characters undergo. I really feel some scenes in USJ would have played out a lot differently had I been listening to different music.

TQ:  Describe United States of Japan in 140 characters or less.

Peter:  United States of Japan is a spiritual sequel to Man in the High Castle focusing on the Asian tragedies of WWII, gaming, & mechas.

TQ:  Tell us something about United States of Japan that is not found in the book description.

Peter:  There’s a scene where the Kempeitai, the secret police of the Japanese Empire, are investigating one of the characters. Parts of the dialogue and sequence pay tribute to Orson Welles’ cinematic vision of Kafka’s The Trial, which thematically connects it with another inspiration for USJ, 1984.

TQ:  What inspired you to write United States of Japan? What appeals to you about writing Alternate History?

Peter:  I’ve mentioned The Man in the High Castle by Philip K. Dick. I was also motivated because I’d heard so many stories about what happened in Asia during WWII that weren’t known here in America and I wanted to share that history. At the same time, it’s a love letter to many of the aspects I love about Japanese culture. There are the mechas, but it’s also about the hard-boiled detectives, cyber yakuzas, and of course, samurai and ronin. How would they fit into a world combined with American ideals? United States of Japan was about sating my curiosity and fascination for the world of High Castle, finding out what happens after the end of the events in the book. Not just 1-2 years later, but decades later. What will people who grew up in the USJ think of that world (especially considering Nazis are undertaking all sorts of wild enterprises)? Would technology progress in the same way?

The best alternate histories help us see our own world in a very different light. I remember one of the first alternate history movies that moved me was Planet of the Apes which at first doesn’t seem like it has anything to do with Earth, before I realized, it’s all about humanity and our society at that time.

The scary part of United States of Japan isn’t how different it is, but how similar.

TQ:  What sorts of research did you do for United States of Japan?

Peter:  That’s an interesting question because it was very hard for me to find works about WWII from the Asian perspective. Almost everything was American-centric, which makes sense being in America. But I really wanted to know what life was like for the average Asian, from the Japanese citizens in Tokyo finding out about the war on the news, to those living in an Asia occupied by the Empire. History skews very differently depending on who does the telling, and I read everything I could get hold of. I also watched a whole lot of war documentaries, interviewed people where I could, and asked people to translate various works for me when I couldn’t find English versions. Some of the books I depended on for the history are The Rising Sun by John Toland, Japan’s Imperial Army by Edward Drea, A Modern History of Japan by Andrew Gordon, Inside the Third Reich by Albert Speer, and Hirohito and the Making of Modern Japan by Herbert Bix to name just a few (there’s a more complete list in the acknowledgements).

TQ:  In United States of Japan who was the easiest character to write and why? The hardest and why?

TQ:  Which question about United States of Japan do you wish someone would ask? Ask it and answer it!

Changes every day. I saw a flock of crows flying in circles and I wondered what they were chasing. There was one morning I craved strawberry ice cream and shortcake and made that the impetus for evolution. The digital blips on my clock strike visual chords that subconsciously subjugate my every thought, a prison to arbitrary dishes of time. I am more bound by those numbers than any ideal which scares me. Is there a way to flip the relationship? Is there an alternate history where we don’t have to worry about the list of lists with empty aspirations and dreams?

Peter:  A multimedia project called United Chocolates of Japan about a world where candy takes over the world. =)

Seriously though, with United States of Japan, I wanted to pay tribute to PKD and bring light to the dark past of the Pacific Front. I’m hoping now that I’ve done that (or at least done my best), I can take the world set up in the first novel and weave my own story into further adventures.

Peter:  Wait, Qwillery? I thought these were questions for the Kempeitai. Who are you all? Where are you taking me? Hold on, wait a second, the wntgkltf----

Note:  No Authors were harmed seriously in the making of this interview. 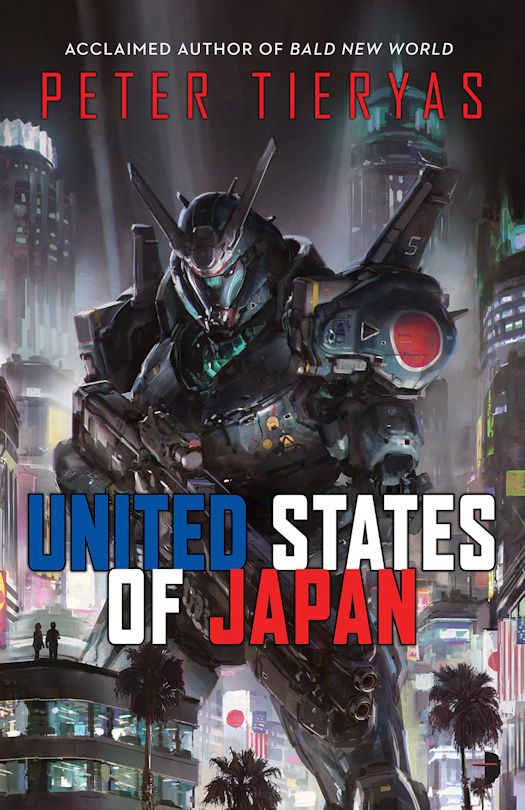 Decades ago, Japan won the Second World War. Americans worship their infallible Emperor, and nobody believes that Japan’s conduct in the war was anything but exemplary. Nobody, that is, except the George Washingtons – a shadowy group of rebels fighting for freedom. Their latest subversive tactic is to distribute an illegal video game that asks players to imagine what the world might be like if the United States had won the war instead.

Captain Beniko Ishimura’s job is to censor video games, and he’s tasked with getting to the bottom of this disturbing new development. But Ishimura’s hiding something… He’s slowly been discovering that the case of the George Washingtons is more complicated than it seems, and the subversive videogame’s origins are even more controversial and dangerous than the censors originally suspected. 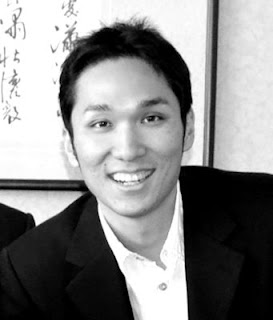 Peter Tieryas is a character artist who has worked on films like Guardians of the Galaxy, Alice in Wonderlandand Cloudy With a Chance of Meatballs 2.