Reviews: Krampus the Yule Lord by Brom and Krampus (the film)


It's the Holiday season, so why not immerse oneself in the frightening folklore of Krampus? Before this year I had never even heard of this European legend. Apparently, he looks like a demon with cloven hooves, large horns, a long pointed tongue, and sharp teeth. This counterpart to Saint Nicholas is said to punish wicked children with beatings or carry them away to Hell. Two recent adaptations of this legend is "Krampus", a film by Michael Dougherty and Krampus the Yule Lord, story and illustrations by Brom. Both renditions have unique attributes and both are worthy of your consideration, so read each review and choose wisely because Krampus is coming to town. 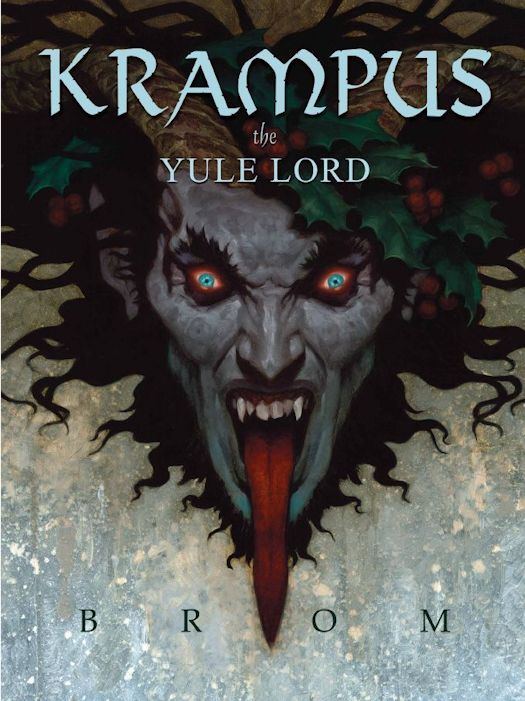 Santa Claus, my dear old friend, you are a thief, a traitor, a slanderer, a murderer, a liar, but worst of all you are a mockery of everything for which I stood. You have sung your last ho, ho, ho, for I am coming for your head. . . . I am coming to take back what is mine, to take back Yuletide . . .

The author and artist of The Child Thief returns with a modern fabulist tale of Krampus, the Lord of Yule and the dark enemy of Santa Claus

One Christmas Eve in a small hollow in Boone County, West Virginia, struggling songwriter Jesse Walker witnesses a strange spectacle: seven devilish figures chasing a man in a red suit toward a sleigh and eight reindeer. When the reindeer leap skyward, taking the sleigh, devil men, and Santa into the clouds, screams follow. Moments later, a large sack plummets back to earth, a magical sack that thrusts the down-on-his-luck singer into the clutches of the terrifying Yule Lord, Krampus. But the lines between good and evil become blurred as Jesse's new master reveals many dark secrets about the cherry-cheeked Santa Claus, including how half a millennium ago the jolly old saint imprisoned Krampus and usurped his magic.

Now Santa's time is running short, for the Yule Lord is determined to have his retribution and reclaim Yuletide. If Jesse can survive this ancient feud, he might have the chance to redeem himself in his family's eyes, to save his own broken dreams . . . and to help bring the magic of Yule to the impoverished fold of Boone County.

In the wee hours of Christmas morning, wannabe musician Jesse Walker contemplates the mess he's made of his life. He hates himself for failing his family and knows he's been a constant disappointment to his estranged wife, Linda, and five year-old daughter, Abigail. Now that Linda and Chief Dillard are in a relationship, Jesse is tortured by the fact that another man is providing them with the finer things in life. Sitting outside his trailer, wallowing in self-pity and contemplating suicide, Jesse is shocked when a man dressed as Santa frantically dashes by, pursued by shadowy figures with glowing orange eyes and horns. Santa leaps into a crimson sleigh complete with reindeer, but before he can achieve lift-off the attackers pounce. Jesse watches as the assailants battle the man in red and the sleigh disappears upward out of sight. Screams follow and a figure plummets from the sky, smashing into the windshield of a neighbor's car. Seconds later, he hears another crash as something plunges through the roof of his trailer. As he investigates his mobile home, he discovers Santa's red sack sitting on his bed. Desperate to give his daughter a Christmas present, he picks up the bag, hoping for a miracle. The sack is indeed miraculous but two powerful entities vie for its possession: Santa Claus and Krampus, the Yule Lord. Jesse's possession of the sack leads to Krampus's minions, called Belsnickels, taking Jesse hostage and bringing him and the sack to the cave where the Yule Lord is held prisoner. Krampus has been languishing in shackles for centuries and is weak from his imprisonment, but with the magical sack back in his possession he can finally free himself. The Yule Lord thirsts for revenge and, against his will, Jesse becomes involved in a supernatural vendetta between the two deities. The reinvigorated Krampus's innate ability to punish the wicked wreaks death and destruction upon the human world as the Yule Lord embarks upon his quest to regain his rightful place in human legends and slay his nemesis; Santa Claus.

Krampus the Yule Lord by Brom is two stories intertwined; one, an amazing tale of legends sprung to life and two, a story of human redemption. I thoroughly enjoyed Brom's rendition of the mythological origins of Krampus and Santa and their links to Odin and Loki. Since they are immortals, they each have their own agendas, and I especially enjoyed how human concerns such as breaking and entering, vandalism, and murder didn't merit Krampus's attention. He simply punishes or rewards whom he sees fit. This story is fresh and fantastic; I was surprised that somewhere along the way I began rooting for Krampus over Santa. It's wonderful not to have any clue where the story is going and to root for the bad guy for a change.

Jesse's story is tense, exciting, and thoroughly captivating. His journey is all the more poignant because the guy is a complete loser and garners little to no sympathy from the start. Brom masterfully draws his readers to Jesse by gradually depicting where his life went wrong, how he got caught up with the wrong people, and how he stopped believing in himself. As the story unfolds and Krampus teaches Jesse some hard life lessons, it evolves into one wild ride littered with danger and dead bodies.

This trade paperback edition is packed with luscious illustrations by the multi-talented Brom which enhanced my reading pleasure. I absolutely love this book and plan on rereading it every year during the Yule season. Its multiple cautionary messages about the environment, technology, and being good are worth heeding. Krampus the Yule Lord is a dark and thrilling tale that I would wholeheartedly recommend to horror enthusiasts everywhere, with one proviso: if you don't enjoy eviscerations or intense violence, this is definitely not for you. 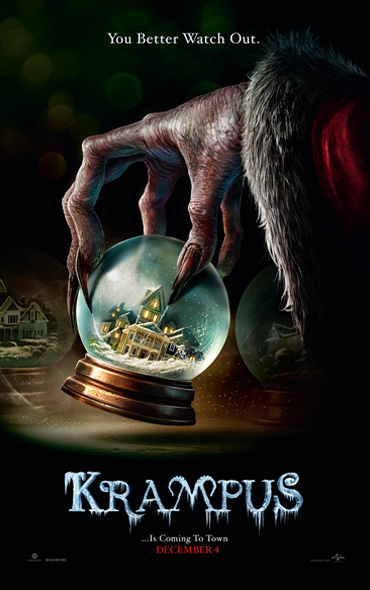 When his dysfunctional family clashes over the holidays, young Max (Emjay Anthony) is disillusioned and turns his back on Christmas. Little does he know, this lack of festive spirit has unleashed the wrath of Krampus: a demonic force of ancient evil intent on punishing non-believers.

All hell breaks loose as beloved holiday icons take on a monstrous life of their own, laying siege to the fractured family’s home and forcing them to fight for each other if they hope to survive.

Folklore tells of Saint Nicholas's counterpart, a horned figure with a lolling tongue who punishes the naughty with beatings and then spirits them away to his lair. "Krampus", the movie, (directed by Michael Dougherty) centers around two dysfunctional families joined together for the holidays. Max (Emjay Anthony) shares his love of Christmas with his sweet German grandmother, Omi, (Krista Stadler) but is dismayed by his unhappy parents (Toni Collette and Adam Scott), his self-absorbed sister (Stefania LaVie Owen), and their obnoxious relatives (Conchata Ferrell, Allison Tolman, David Koechner). Max finishes his letter to Santa only to have it intercepted by his cousins who humiliate him for still believing. In a fit of anguish, he tears up the letter and throws it out his window. This act of disbelief heralds the arrival of someone less jolly than old Saint Nick. Krampus and his helpers come to town with the sole purpose of teaching Max and his quarrelsome family the consequences of their outrageous behavior.

"Krampus" is an enjoyable alternative to traditional holiday films. The cast was terrific; displaying great versatility in both the comedic and horror elements of the film. I especially enjoyed Tolman and Koechner as the heads of household from the redneck side of the family. Koechner and Ferrell deliver some of the funniest lines but Koechner's "Honey, I just got my ass kicked by a bunch of Christmas cookies" has to be one of the best.

Krampus's demonic servants, scary snowmen and possessed gingerbread men, provided a feeling of impending doom and dread. Krampus, when finally revealed, was not quite what I was expecting, but still eminently creepy. The film's effects, both digital and practical, were well executed. The animated segment of Omi's past encounter with Krampus is delightfully eerie and reminiscent of the movies "Coraline" and "Nightmare before Christmas". Listen for the song, Krampus- Karol of the Bells at the end credits, it's my new favorite Christmas song.

I was disappointed that with its PG-13 rating, "Krampus" had no guts or gore to back up its grim warning of the payback for a lack of Christmas spirit. I would still recommend the film to both the naughty and nice, because "Krampus" delivers its fair share of laughs, thrills and chills.