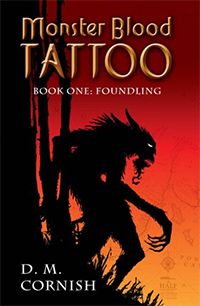 D. M. Cornish was born in 1972 in Adelaide, Australia. He studied illustration at the University of South Australia. In 2003, he had a chance meeting with a children's book publisher who discovered he had filled journals with drawing and notes about a world he called the “Half-Continent”. The publisher asked him to write 1,000 words about his world. Three years later the book was published. It won Best Young Adult Novel at the 2006 Aurealis Awards. The American Library Association added the book to its 2007 Best Books for Young Adults.

Set in the world of the Half-Continent—a land of tri-corner hats and flintlock pistols—the Monster Blood Tattoo trilogy is a world of predatory monsters, chemical potions and surgically altered people. Foundling begins the journey of Rossamund, a boy with a girl’s name, who is just about to begin a dangerous life in the service of the Emperor. What starts as a simple journey is threatened by encounters with monsters—and people, who may be worse. Learning who to trust and who to fear is neither easy nor without its perils, and Rossamund must choose his path carefully.

Complete with appendices, maps, illustrations, and a glossary, Monster Blood Tattoo grabs readers from the first sentence and immerses them in an entirely original fantasy world with its own language and lore.

I've been looking forward to reading this book ever since it came out, but never seemed to find the time. I checked the book out recently at my local library to take with me on my Thanksgiving trip back home and found myself enjoying a great book.

Foundling is a nice mixture of fantasy, horror and Dickens. From the start of the book, D. M. Cornish grabbed my attention with his inventive world building and strong character development. Rossamund, a boy orphan apprenticed to the lamplighter's guild, starts off his career with an adventure. He has to leave his orphanage and make his way down a river to a small town on the edge of the empire, where he will be a lamplighter. He knows no one and doesn't even know what a lamplighter does. He wanted to a be a sailor and live the life of adventure. It's easy to relate to Rossamund and his desire for adventure. He also goes through many difficult challenges along the way and shows real growth as a character.

Cornish uses the journey to explore the world he's created and ignite curiosity. Even with all that he reveals about his world, there are still many more questions I asked myself as I read, which, for me, is a positive thing in the first book of a series. Cornish shows a lot of original creation in professions and creatures in the book that I've never seen in other books. The one aspect I didn't particularly like about his creatures is some of them take on a muppetish description at times. They aren't all scary and some take on human characteristics, like wearing clothes and talking clearly. I understand the book's target audience is teenagers, and so I looked past this small choice in his world building.

Foundling is a refreshing genre blend between fantasy and horror. It offers a new take on a world filled with monsters and humanoids and how they coexist. Even though the book wasn't as scary as I had hoped it would be, I'm definitely going to make time to complete the trilogy. There is minor violence and horror. I would recommend it to teens and adults. I'd recommend you borrow this book from a friend or the library.

“[T]he letter addressed to him personally. It was like a sweet song to his tired soul, an encouragement from those far off---he was still thought of, he was remembered.” page 308
Posted by Qwill at 7:14 AM