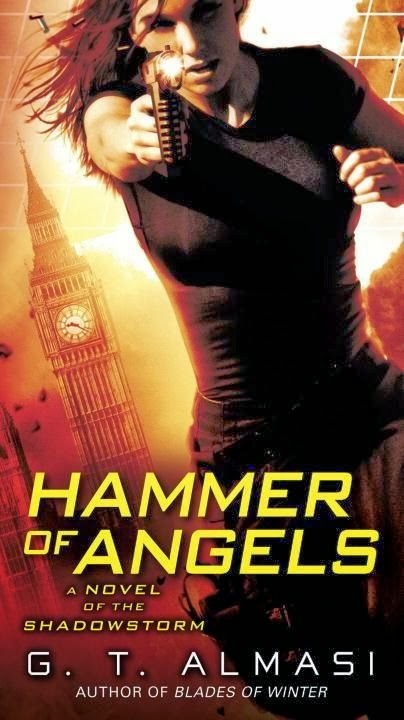 In G. T. Almasi’s thrilling alternate reality, the United States, the USSR, and the Republic of China share a fragile balance of power with Greater Germany, which emerged from World War II in control of Europe and half of the Middle East. To avoid nuclear Armageddon, the four superpowers pursue their ambitions with elite spies known as Levels, who are modified with mechanical and chemical enhancements.

Nineteen-year-old Alix Nico, code-named Scarlet, is a kick-ass superheroine with killer Mods and an attitude to match. She’s considered one of America’s top Levels, even though her last mission nearly precipitated World War III. So now Scarlet and her new partner, Darwin, have been sent to Greater Germany to help sow the seeds of anarchy and prevent Germany’s defection to Russia and China.

But where Scarlet goes, chaos follows—and when her mission takes an unexpected turn, she and Darwin must go ever deeper into enemy territory. As Scarlet grapples with a troubling attraction to her new partner, explosive information comes to light about the German cloning program and one of its prisoners—a legendary American Level who just happens to be Scarlet’s father.

This was the second book in the Shadowstorm series by G.T Almasi which is set in an alternate universe where there are only 4 world powers -  a Nazi controlled Germany where they have enslaved the Jewish race and much of Europe, USSR, China and then there is the United States who are fighting all of them with an elite force of technologically enhanced humans. In this instalment the series heroine, Alix Nico, is sent to Europe to fan the fires of dissent within Greater Gemany's slave trade in an effort to do as much damage to them as possible. She is supported by her new partner Darwin and their relationship unfolds along with a lot of action. Working with Darwin is a like a double edged sword as he is a clone of her previous partner and boyfriend Trick. Just to make her mission even more dangerous Alix (code name Scarlet) discovers clues that her father, who was also an agent, may not actually be dead.  The chase is on to finish her mission and rescue her father.

I hadn't read the first book of the series  - Blades of Winter but I found book 2 very easy to get into and figure out who was who. This was quite a different read from some of the other books I have been reading lately with the non-stop action.  There was barely any dialogue that didn't take place immediately before, during or immediately after a car chase, shoot out or bombing. I almost thought there was a bit too much action as there was no let up on the explosions, gun fights and hand to hand combat. At times it could be rather exhausting to read and I wish I had some of Alix's enhancements in order to plough my way through it. I did really like Almasi's alternate reality as it was well developed and executed. I also thought that Almasi opens up a number of potential plot points with the cloning of various characters. I liked but did not love Alix as a character.  Perhaps if I had read book 1 I might have warmed to her a bit more. I thought that Darwin could have made a more interesting character especially that he was one of three clones, one of which died while working with Alix. There wasn't very much time given to the development of the other characters and I felt a bit at times like I was reading the plot of a video game. Having said that there was enough to grab my attention and I look forward to what comes next especially, with the big surprise at the end of the novel.