Please welcome Adam Sternbergh to The Qwillery as part of the 2014 Debut Author Challenge Interviews. The fabulous Shovel Ready was published on January 14, 2014 by Crown. 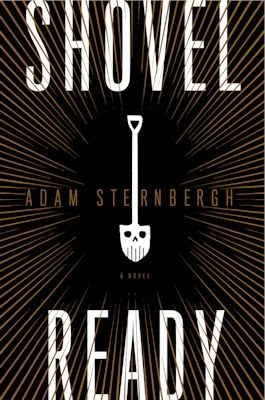 TQ:  Welcome to The Qwillery. When and why did you start writing fiction?

Adam:  I’ve been writing fiction since I was a little kid — I wrote an entire episode of “Battlestar Galactica” (the original one) in pencil, in longhand, on foolscap paper, when I was about 9 years old. When I was in 8th grade, I wrote a detective story about a private eye named Hades Valentine, which back then I thought was the coolest name ever invented. (I was delighted recently to see that there’s currently a series of fantasy novels starring a woman named Dante Valentine.) As to why I write fiction: I have always loved stories and I found I moved irresistibly and probably inevitably from reading them to dreaming them up.

Adam:  I wish I could say plotter, but I’m honestly more of a pantser. I get very fidgety working on anything remotely like an outline — I just can’t wait to dive in. I often think of a novel like a huge marvelous house that I’m exploring, and I want to be just as surprised as the reader when I open each new doorway. That said, as the writer, I have the luxury of backing out slowly from a particularly boring room and then erasing it from existence, or building a whole new wing on the house if I feel like it needs it.

TQ:  What is the most challenging thing for you about writing? Do you think being a journalist influences how you write fiction?

Adam:  Being a journalist influenced, and impeded, my fiction for a long time. With journalism, you’re not starting from scratch: In fact, the trick is often taking a very large amount of pre-existing and inflexible information and finding some way to winnow it down and organize it into a story. Fiction feels like the opposite to me: You can start with a few words then widen out to build a whole world. And there are no pre-existing limitations: just a blank page. Which to me can feel both very intimidating but also very exhilarating.

Adam:  There are a ton: I love the classic hardboiled writers like Raymond Chandler and James M. Cain, and I also love prose stylists who can really make their language dance: writers like Martin Amis, Nicholson Baker, Angela Carter and Megan Abbott. I love Graham Greene’s combination of weariness and romance — and the fact he wrote novels he classified (in a somewhat self-derogatory way) as “entertainments.” That’s what I aspire to write: Entertainments.

Adam:  In a near-future dystopian NYC, a garbageman-turned-hitman is hired to kill the daughter of a televangelist. Then things get complicated.

TQ:  Tell us something about Shovel Ready that is not in the book description.

Adam:  Pretty much every single character’s name in the book is a reference to something, whether it’s mythological, biblical, or pop cultural. Certain reviewers have picked up on a few of them: For example, there’s an assassin in the book named Pilot who always washes his hands after a killing.

TQ:  Shovel Ready is a genre twisting SF Noir Thriller (at least I think so). Why did you set the novel in New York City? Why blend genre?

Adam:  I set it in NYC because it’s where I live, but more important, because I think New York is so intriguing as this kind of mythical city that exists in real life. All the physical places here — Broadway, Central Park, Wall Street — also reside in our shared cultural mythology. That seemed like such a fun potential canvas for this story. As for blending genres — it seemed so completely natural that I don’t even really think of it as a choice. Current day life seems so much like sci-fi already — with the gadgets we use and our continual interaction with, and reliance on, technology — that I feel like you’d have to go out of your way to excise those elements completely. My story takes place in the future, but it’s a future that I feel like is only one or two degrees of extrapolation away from our present-day reality.

Adam:  I love this observation and I love this comparison — thank you! I was working hard in SHOVEL READY at creating this visually evocative world — this bombed-out version of New York, along with a parallel virtual world in which people can alter their bodies and live out various surreal (and perverse) fantasies. So I wanted to use all the tools at my disposal: What words mean, of course, but also how they sound to the ear in different combinations and even how they look on the page. Part of that was playing with line spacings for various effects—and realizing that sometimes it’s very evocative to insert
a line

British writers, in particular Ali Smith, often play with this sort of thing — and I acknowledge that a little of this goes a long way. Another egregious example of this approach happens during a scene that’s a shoot-out in a bar, with the sentence: “The shotgun speaks. Barroom.” Which is, of course, a visual pun: Both the sound of the shotgun going off, and the fact that it’s taking place in a barroom. I couldn’t resist that one — it’s my nod to all the great old Spirit comic books by Will Eisner, which used puns as sound effects, as well as the iconic “Kapows!” from the old “Batman” TV show.

TQ:  What sort of research did you do for Shovel Ready?

Adam:  I spent a lot of time Googling “Times Square dirty bomb” which probably put me on a few NSA watch lists somewhere. One random but invaluable piece of research was an “AMA’ on Reddit, titled “I Am A Garbage Man,” which gave me good ideas about the weird particulars of a garbage man’s life. The Internet is an amazing resource that way — pretty much any kind of person you want to know about probably has a confessional blog with lots of information. Beyond that, most of the factual material was drawn from work I’d already done — whether on previous articles I’d written, or research for other, discarded novels.

TQ:  Who was the easiest character to write and why? The hardest and why? Who is your favorite ethically ambiguous character?

Adam:  In a sense, Spademan was the easiest character to write, because he is the narrator and the voice inside your head — I really did think of him as a kind of tour guide through Hell, like the ferryman on the river Styx, who’s retelling this adventure as he takes you through this world. That said, I also really liked the character of Mark Ray, the youth pastor on the run from his past — I would love in the future to tell more of his stories. The hardest character was probably Persephone, who is the young girl who starts out as Spademan’s target — in part because I’ve never been a teenage girl myself, and in part because her own story is full of a wide-range of nightmarish experiences that, I think, are very difficult to access authentically. And if you mean my favorite ethically ambiguous character in the world? That’s a very tough one to narrow down. But I have to go with the original scoundrel, or at least the first one I ever met: Han Solo.

TQ:  Give us one of your favorite lines from Shovel Ready.

Adam:  This one’s pretty gruesome but I really like it — it’s describing the death of a character (I won’t say whom but he’s a bad guy) who’s just had his throat slashed by Spademan:

“When I let him go he falls to his knees.
Penitent.
Having seen the light. And the dying of the light.
His windpipe whistling.
Exit music.
He plays himself offstage.”

Adam:  Another Spademan novel is in the works — a sequel to SHOVEL READY that takes place about a year after this book ends. Just long enough for everything to have settled down — and then gone completely off the rails once again. 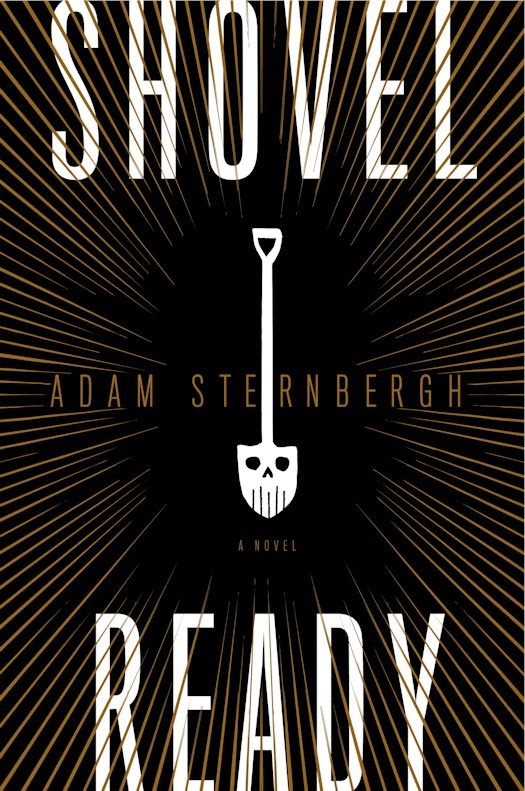 The futuristic hardboiled noir that Lauren Beukes calls “sharp as a paper-cut” about a garbage man turned kill-for-hire.

Spademan used to be a garbage man. That was before the dirty bomb hit Times Square, before his wife was killed, and before the city became a blown-out shell of its former self.

In a near-future New York City split between those who are wealthy enough to “tap in” to a sophisticated virtual reality, and those who are left to fend for themselves in the ravaged streets, Spademan chose the streets. His new job is not that different from his old one: waste disposal is waste disposal. He doesn’t ask questions, he works quickly, and he’s handy with a box cutter. But when his latest client hires him to kill the daughter of a powerful evangelist, his unadorned life is upended: his mark has a shocking secret and his client has a sordid agenda far beyond a simple kill. Spademan must navigate between these two worlds—the wasteland reality and the slick fantasy—to finish his job, clear his conscience, and make sure he’s not the one who winds up in the ground.

Adam Sternbergh is the culture editor of The New York Times Magazine. Formerly an editor-at-large for New York, his writing has been featured in several other publications including GQ and The Times of London, and on the radio program This American Life. He lives in Brooklyn and is at work on a second Spademan novel, Near Enemy, set to be published in 2015.