Please welcome Holly McDowell to The Qwillery. Holly writes the King Solomon's Wives series which presently consists of 3 episodes. I find what Holly is doing with the series fascinating and wanted to share it with you!

TQ:  Welcome to The Qwillery. What you inspired you to write about the descendants of King Solomon's harem?

Holly:  Thanks, Sally! Episode Three of King Solomon's Wives is officially available *this week* and I'm thrilled for the chance to talk about the series!

My inspiration: I've always been interested in what kind of power women have had throughout history. In the time of King Solomon's harem, one woman ruled a giant, incredible empire. Makeda, Queen of Sheba, commanded respect from traders and royalty throughout the world. She was amazing.

At the same time, most every other woman in the world had no power, except what they got based on who their father, husband, or son was, or whether they could give birth to a son. The women in King Solomon's harem experienced that sort of oppression, and I've always been fascinated by their story. I've always wondered how they lived and interacted.

I also felt inspired to explore life in a society of women who can't interact with the outside world. The Wives in my story descended from women who escaped the ancient harem using supernatural means. Now, in the modern world, they're bound by terrible genetic consequences. They always bear daughters, but they die in childbirth. Worse, they can't have any sort of real relationship, because their touch is addictive. For them, love is death in every way, and everyone in the outside world is a potential enemy.

TQ:  Why did you take the interactive approach to these stories and how do the readers let you know what they want?

Holly:  My amazing publisher, Coliloquy, developed the interactive technology and made it available for their authors. They do all sorts of interactive storytelling (you should check out their other titles!). For King Solomon's Wives, at the end of episodes one and two, readers get to vote on things like which characters they want to hear more about, where they'd like episodes to be set, and what periods of history they want to read chapters about. I look at the votes and write accordingly. It's fun! And quite challenging, of course.

TQ:  How difficult is it to change direction in the stories based on what readers want?

Holly:  I give people 5-6 options to choose from, and I never really mind writing any of the options...but often, the readers have failed (failed!) to choose the options I secretly wanted them to. (Curses!) It's definitely a challenge to follow my readers' whims instead of my own, but it's also a lot of fun. I've learned to feed off the feedback. There's something inspiring about knowing for sure that someone, somewhere really wants to hear about a certain character.

I love knowing what my readers want, and I love giving it to them but also trying to surprise them. I'll write about the character they pick but maybe not in the way they expect. Also? Every time I've focused on a particular character because my readers asked me to, I've been thrilled that I did. I've come up with chapters I never would have otherwise.

TQ:  Do the stories bend genres? How would you classify them?

Holly:  King Solomon's Wives definitely bends genres. The series is easily a thriller/suspense story, but parts are historical fiction, and there are speculative elements throughout. It's even got alternate history and historical conspiracy going on... along with a family saga feel. It's sort of like 'Dan Brown meets Anne Rice's Mayfair Witch series meets Margaret Atwood's A Handmaid's Tale.' (All favorites of mine, by the way.)

TQ:  What has been the most surprising thing that has happened in the stories so far?

Holly:  I don't want to spoil too much, but I love, love, love making characters do things they've sworn they never will. In episode three, for example, Dilara has to break almost every sacred law she and her ancestors have enforced for three thousand years.

As for surprising reader feedback, I was surprised by the answer to the question, "Which Wife do you most want to see fall in love?" Love means trouble and even death for a Wife, so my readers were basically choosing which Wife they wanted to see suffer. Ha. They ended up voting for Sumarra. It's going to be a rough few episodes for her...

Holly:  Episode Three (King Solomon's Wives: SACRIFICED) is out this week, and I'm excited about it! I can't wait to see what readers think. I'm working on Episode Four already, too. I'll get to feature a couple of characters I've been building up on the sidelines, Yasemin and Pasha, and I'll get to write about my two favorite "outsiders," Jonah and Berhanu. And? I get to write more history. Because of reader votes, I get to delve into early twentieth century Chicago.

TQ:  Thank you for joining us at The Qwillery?

Holly:  Thanks for inviting me! 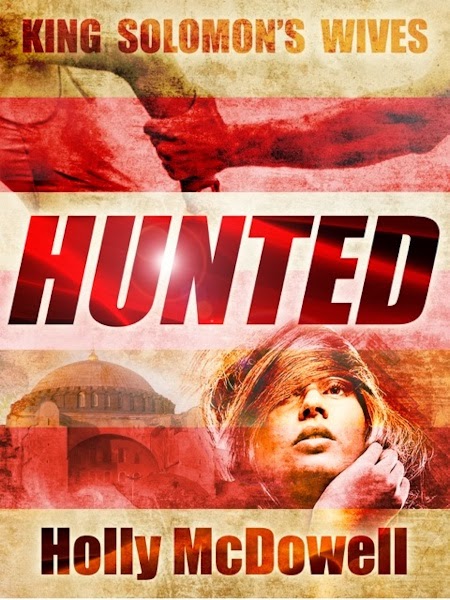 The two thousand descendants of King Solomon’s ancient harem have the ultimate power of seduction: Their very touch is as addictive as any drug.

But that power comes at a price: Wives die giving birth. They can only bear daughters. They are only fertile until the age of twenty-four.

Hunted for hundreds of generations by men who crave their touch and fear its power, the Wives have kept safe by following three simple rules:
But tonight, the rules have been broken, and someone must pay.

In the blistering first episode of King Solomon’s Wives, we meet Sumarra on the night she plans to conceive. Instead, she and the other wives find themselves under attack from a group of male hunters, intent on destroying them.

Sumarra has always broken small rules and indulged rebellious tendencies. Now that the Wives have been found, her defiance will either be their salvation or her own undoing. 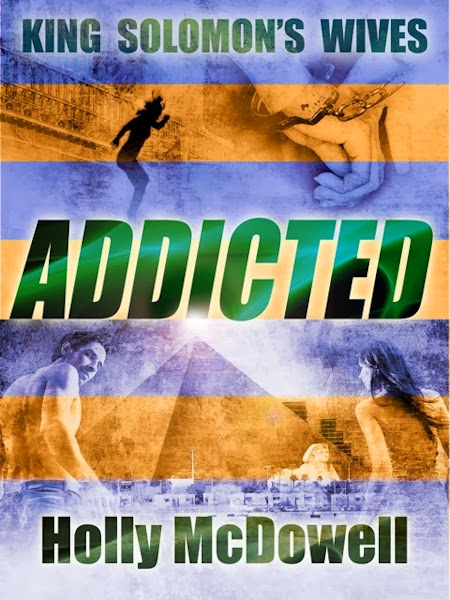 In the aftermath of a brutal, coordinated attack by male Hunters, the descendants of King Solomon’s harem have gone into hiding. Terrified, hungry, and mourning the loss of their Sisters, they live in fear and isolation, trying to avoid capture and hoping to find a way to reach each other.

Unaware of their plight is Sonya, a rogue Wife who ran away to Las Vegas when she violated the clan’s cardinal rule: falling in love with a man. Now married and coping with her husband’s addiction to the chemicals in her skin, Sonya lives in self-made exile, knowing that if they are discovered, the clan will punish her and kill her husband Ashe.

But when Wives turn up in Vegas held hostage by Hunters, Sonya can only save them by revealing herself, potentially sacrificing her freedom...and Ashe’s life.

Her family, her conscience, and thousands of years of historical bonds are at stake. And once again, Sonya will have to choose between duty and love. 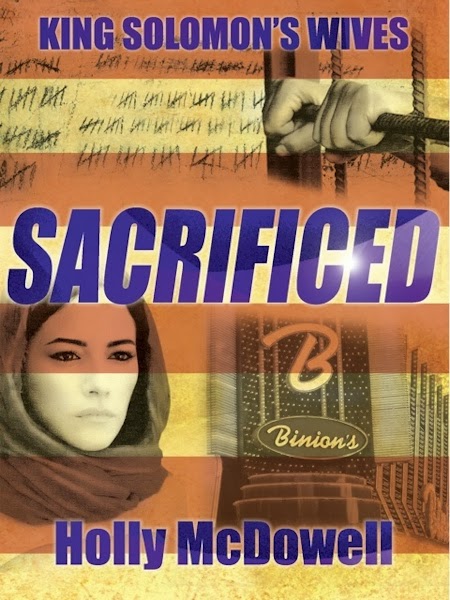 In this harrowing third episode of King Solomon’s Wives, Hunters have imprisoned Sumarra. Trapped, tortured and missing her final window to become pregnant, she must find a way out or her ancestral line will perish forever. Time and hope might just be running out.

Her rival, Dilara, is the only Wife with the knowledge and resources to rescue her. But Dilara has other pressing problems: Infighting among the clans, the reappearance of a rogue Wife long thought dead, the Hunters’ continuing attacks, and her own haunting mistake. Will Dilara be able to unite the clans and be the leader the Wives so desperately need?

Dilara has always followed and enforced the rules, but in order to save Sonya, Sumarra, and the sisterhood, she must choose to go against everything she believes, even if it means sacrificing her rank, her integrity, and her own life. 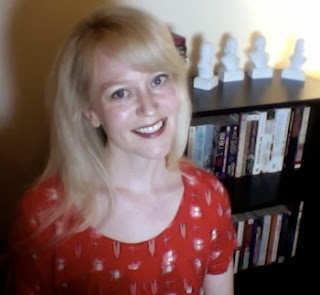 Holly McDowell lived in Colorado, Georgia and South Carolina before discovering the magical city of Chicago. Now, she can be spotted drinking glögg, searching for the world's best tapas bar, and writing in coffee shops all over the windy city.

Holly's current project is an interactive, digital series called King Solomon's Wives, a modern thriller about women alive today who descended from King Solomon's ancient harem. It's full of historical conspiracy and, well, harem sex. And because the series is interactive--meaning readers get to vote on the direction of the story--Holly was recently featured in an article in the Huffington Post. Here are a few quotes from HuffPo readers about the very concept of an interactive series: "Dear God, NO." "UGH." "Just what we need, more writers acting like parrots." "[This could be] the end of our civilization."

All Holly knows is she's having a blast writing it and wants to keep doing so. If people buy one episode, she gets to write the next. Episodes one through three are available now.