Please welcome Ann Leckie to The Qwillery as part of the 2013 Debut Author Challenge Interviews. Ancillary Justice, Ann's debut novel, is published today by Orbit. Please join The Qwillery in wishing Ann a Happy Publication Day! You may read Ann's Guest Blog - Who are you? And how do you know who you are? - here. 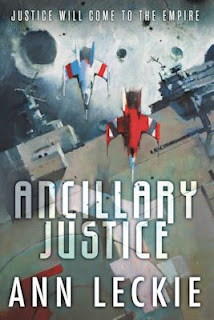 Ann:  Thanks for having me!

Ann:  I've actually been writing on and off since grade school. In high school I actually got up the courage to send something out--to Twilight Zone Magazine--and received my first ever rejection letter. For years I thought (sometimes fondly, sometimes despairingly) about the possibility of being a Real Published Writer, but didn't write very much. College, in particular, seemed to drain a lot of the fiction-writing energy out of me. Though just after college I did send one story out to True Confessions--I just wanted to see if I could do it. I read True Confessions and True Romance until my eyes bled, and then I produced some kind of approximation of what I'd just read. It actually sold, which was pretty exciting, but the process had been so unpleasant I couldn't bring myself to do it again. After that I decided it wasn't worth spending what free time I had writing something I didn't really enjoy reading.

When I had my first child, for the first time in my life I was sitting at home for long periods of time with almost no one to interact with besides a tiny, non-verbal person who spent most of their time asleep, eating, or crying because they were tired or hungry. I love my kids, and love being with them, but tiny babies are not terribly intellectually stimulating. In desperation I began looking for things to do that would keep my mind from liquefying. One of those things was NaNoWriMo, and once I'd won my first NaNo, I decided that that was a good time to stop wishing, and really try the writing thing in earnest.

Ann:  Hmm. I'm sure I do have quirks--it would be very odd if I didn't--but I'm not sure one springs to mind. I know I (mostly) can't listen to music with English words while I write, my theory is that it engages the same part of my brain that's trying to make sentences.

I also find that when I'm stuck, the one thing that's most likely to work is if I go to the library--a university library is best, though I'm lucky to be spoiled for choice of libraries, where I am--and pick a (nonfiction) section and pull anything off the shelf that seems intriguing. Generally, after I've read enough--or happened across the right thing--I can move forward again.

I have occasionally advised other writers to try this, when they've said to me that they were stuck, and most of the time I get that "Right, Ann, I'm not going to tell you how ridiculous that is because you're my friend" look.

Ann:  Oh, a pantser. Though very often I know a general arc--I know where I'm starting, I know more or less where I intend to end up (if I'm very lucky I know a scene or two of the ending) and maybe a few landmarks on the way. Usually, while I'm working on one scene, the next couple are taking shape in the back of my mind.

I know there are people who outline everything before they start writing, down to number of scenes and what happens in them, all the way from beginning to end, and then they sit down and fill in their outline. I believe they really exist, because people have told me they work that way, but I'm not sure I quite understand how anyone can do that. If nothing else, why bother outlining if you already know that stuff? I'd just go ahead and write it. But everyone's process is different, and there's no wrong way so long as your way works for you.

It's that voice that stopped me for a long time. Doing NaNo showed me I could write past that, and the results would actually be kind of okay, or at least not anything like what the Internal Critic was telling me they would be.

So, now I know I can write past it. But I haven't shut the voice up, not really. I'm not sure I ever can, entirely, but I know that I can let it sit in a corner and mutter to itself and it won't hurt me. It gets louder at certain times--important junctures in a plot, and often about three quarters of the way through--and sometimes I actually tell it out loud to shut up because yes, I know it sucks, but I'm going to write anyway. I only do that in my basement, though, not at the coffee shop!

Ann:  Breq was a Radchaai ship AI. Now she only has 1 human body & 1 goal: to revenge herself on the many-bodied, near-immortal Lord of the Radch.

TQ:  What inspired you to write Ancillary Justice?

Ann:  I'm not sure it was one thing, really. The story kind of arose out of the bits of worldbuilding I was playing with.

TQ:  What sort of research did you do for Ancillary Justice?

Ann:  Mostly I read history and anthropology. Also some psychology and some physiology and neurology--I knew that Justice of Toren would have a very specific, quantitative view of what was going on with its officers, and that meant I needed to at least in my own mind understand what happens physically when someone feels strong emotion, for instance. I also, at one point, could tell you all the different sorts of bridges there were and why they're constructed the way they are, and could drive around town going, "Suspension...that's a cantilever bridge..." It's mostly gone now. I only needed it for one scene.

But history and anthropology are always good, and are often the areas I read in when I'm stuck and looking for a way forward.

Ann:  Breq/One Esk/Justice of Toren was definitely the hardest character to write. For one thing, there's a problem with using "I" accurately when you're someone who's got dozens of bodies. For another, she's really very physically different at different stages of the book--one body, a unit of twenty bodies, a whole ship. And a whole ship with hundreds of eyes, ears, and hands, seeing, hearing, doing hundreds of things all at once. It was a while before I had even the first idea of how to approach that.

Everyone else, even the characters who I'd otherwise have said were the most difficult, seemed fairly easy after that!

TQ:  Without giving anything away, what is/are your favorite scene(s) in Ancillary Justice?

Ann:  There are several I'm quite proud of, but if I had to choose a favorite it would be the bridge scene. The bridge is a simple beam bridge made entirely of glass, stretching across a canyon three kilometers deep. A glass bridge ought to collapse under its own weight, of course, but this one doesn't, nobody's quite sure why. I can't say much about the scene without spoiling, but there's...a fraught conversation that happens on the bridge, and it's very much a turning point in the story.

Ann:  Next is book 2, Ancillary Sword. And after that, Ancillary Mercy. After that--I'm not sure, it's too far into the future. 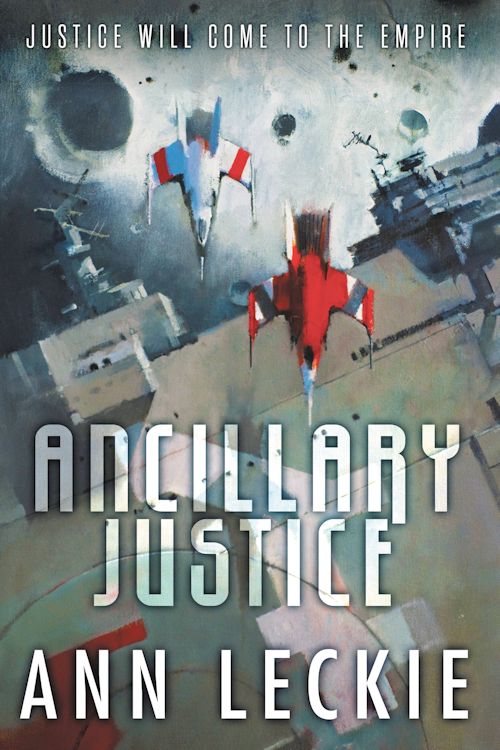 Breq is both more than she seems and less than she was. Years ago, she was the Justice of Toren--a colossal starship with an artificial intelligence linking thousands of corpse soldiers in the service of the Radch, the empire that conquered the galaxy.

An act of treachery has ripped it all away, leaving her with only one fragile human body. And only one purpose--to revenge herself on Anaander Mianaai, many-bodied, near-immortal Lord of the Radch.

Ann Leckie has published short stories in Subterranean Magazine, Strange Horizons, and Realms of Fantasy. Her story “Hesperia and Glory” was reprinted in Science Fiction: The Best of the Year, 2007 Edition edited by Rich Horton.

Ann has worked as a waitress, a receptionist, a rodman on a land-surveying crew, and a recording engineer. She lives in St. Louis, Missouri, with her husband, children, and cats.