PORTLAND, OOR 12/12/2018 — Image Comics is pleased to announce that the multiple Eisner Award- 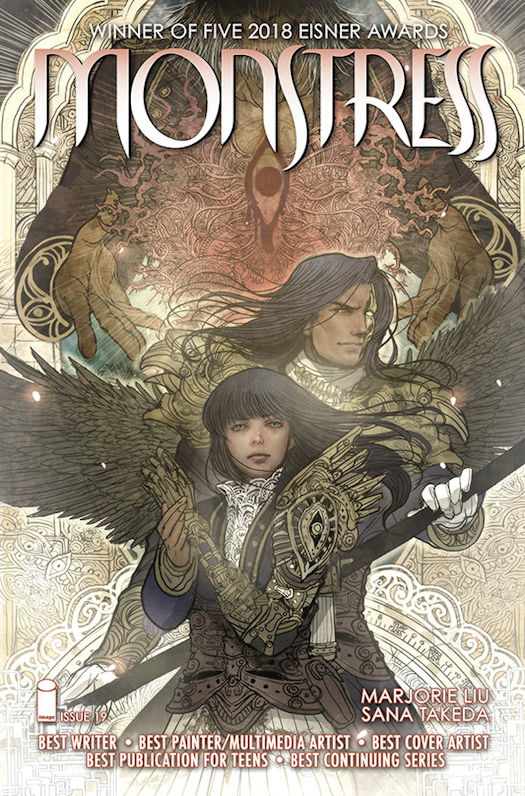 winning series Monstress by creator/writer Marjorie Liu (who made history as the first woman to win an Eisner in the Best Writer category for the series this year) and creator/artist Sana Takeda will be collected into a deluxe, oversized hardcover edition, Monstress: Book One, in July. A new story arc filled with adventure will launch this January with Monstress #19.

While fans wait for the hardcover edition this summer, they can pick up Monstress #19 in January, which will begin a new story arc in the series and will follow Maika and Corvin on their search for Kippa through a warped and lethal land, where even Kippa herself will face her own terrible monsters. 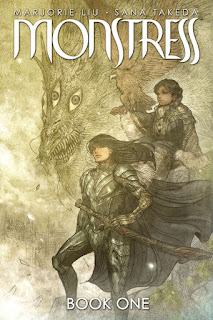 The richly imagined world of Monstress is an alternate matriarchal 1900s Asia, with an art deco-infused steampunk aesthetic that’s brimming with arcane dangers. Within it, a teenage girl struggles to overcome the trauma of war, a task that’s made all the more difficult by her mysterious psychic link to an eldritch monster of tremendous power—a connection that will transform them both and place them in the crosshairs of both human and otherworldly powers.

Monstress #19 will also be available for purchase across many digital platforms, including the official Image Comics iOS app, Amazon Kindle, Apple Books, comiXology, and Google Play.

Monstress Book One hardcover (ISBN: 978-1-5343-1232-6) will be available in comic shops on Wednesday, July 3rd and in bookstores on Tuesday, July 9th. It can be pre-ordered on Amazon, Barnes & Noble, Books-a-Million, IndieBound, and Indigo.


Select praise for Monstress:
"Marjorie Liu and Sana Takeda take eastern and western comics storytelling traditions and styles, and create something wholly their own and remarkable: a beautifully told story of magic and fear, inhumanity and exploitation, of what it means to be human and the monsters we all carry inside us. Also, some of the best cats in comics. A delight." —Neil Gaiman

“If you want big, beautiful, terrifying, violent magic, Monstress is your next favorite comic.” —Cosmopolitan

“World-building on a scale rare in mainstream comics.” —The Hollywood Reporter 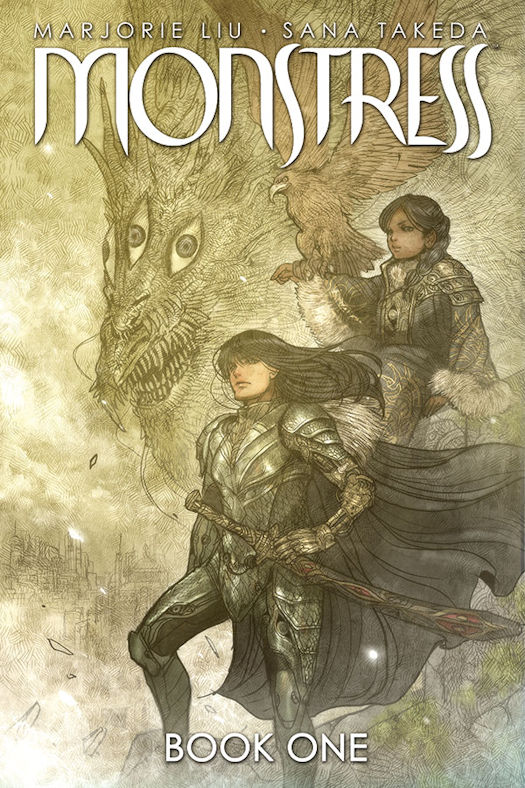 ABOUT MARJORIE LIU
Marjorie Liu is an attorney and New York Times bestselling author of over nineteen novels. She is the co-creator of the Eisner-nominated series Monstress published by Image Comics, for which she made history in 2018 as the first ever woman to win the Eisner Award in the Best Writer category. Her comic book work also includes X-23, Black Widow, Dark Wolverine, and Astonishing X-Men, for which she was nominated for a GLAAD Media Award for outstanding media images of the lesbian, gay, bisexual and transgender community. She currently teaches a course on comic book writing at MIT.


ABOUT SANA TAKEDA
Sana Takeda is based in Japan, and is a former designer for Sega. Previous comic book work includes Drain and Ms. Marvel, though she is best known in the United States for working with Marjorie Liu on X-23 and their hit fantasy series, Monstress.


ABOUT IMAGE COMICS
Image Comics is a comic book and graphic novel publisher founded in 1992 by a collective of bestselling artists. Image has since gone on to become one of the largest comics publishers in the United States. Image currently has five partners: Robert Kirkman, Erik Larsen, Todd McFarlane, Marc Silvestri, and Jim Valentino. It consists of five major houses: Todd McFarlane Productions, Top Cow Productions, Shadowline Comics, Skybound Entertainment, and Image Central. Image publishes comics and graphic novels in nearly every genre, sub-genre, and style imaginable. It offers science fiction, fantasy, romance, horror, crime fiction, historical fiction, humor and more by the finest artists and writers working in the medium today. For more information, visit www.imagecomics.com.
Posted by Qwill at 8:31 AM