Interview with Victor Godinez, author of The First Protectors


Please welcome Victor Godinez to The Qwillery as part of the 2018 Debut Author Challenge Interviews. The First Protectors was published on November 13, 2018 by Talos Press. 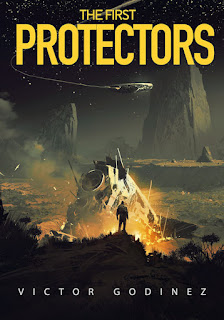 Victor:  Hmm, I think it was a short story with pictures I drew when I was around 10, with a kid who gets kidnapped out of his bed by aliens and taken on adventures. He wakes up at the end back in his bed, thinking it was all a dream, but you can see the alien’s antennas outside his window. I hate the “It was all a dream” trope in fiction, incidentally. Lame!

Victor:  Hybrid. I generally have an overall vision of how I want the story to go, but the day-to-day writing is generally a surprise to me. I do sometimes write myself into a plot corner as a result, but the easiest way out is usually just to imagine how my protagonist would react to the situation he or she is in. Or sometimes I just send in killer robots with laser guns and missile launchers. That tends to reboot a scene pretty quickly.

Victor:  Lol, all of it? It’s always a bit excruciating. Giving different characters distinctive voices and behaviors is a big challenge. We’re so used to thinking as ourselves that it’s very hard to think like someone else, or to feel or talk like someone else.

Victor:  Well, there are good and bad influences, right? On the positive side, you can round up the usual suspects: Tolkien, Stephen King, Douglas Adams, T.H. White, Asimov, and so on. On the negative side, well, I love twitter, but it does condition you to have the attention span of a hyperactive fruit fly. Spending 30 minutes or an hour writing long form does get easier with practice, but internet culture does not encourage patient diligence.

TQ:  Tell us something about The First Protectors that is not found in the book description.

Victor:  Political intrigue and upheaval among Earth’s governments as the invasion unfolds plays a big part in how the confrontation plays out.


TQ:  What inspired you to write The First Protectors? What appeals to you about writing Science Fiction?

Victor:  I wanted to explore what an alien invasion might realistically look like and how we might realistically fight back against it. At the same time, the various real-world military conflicts over the last decade-plus have made it impossible to ignore war’s mental and spiritual toll on those who fight in them. So I wanted to explore that internal tension, as well, of someone who never wanted to fight again being essentially forced to fight for the entire world. Ultimately, science fiction is about what it means to be human as technological change accelerates. All the hardware and spaceships and whatnot are only interesting if you put confused, scared, determined, smart, overwhelmed people in front of them and behind them and inside them.

TQ:  What sort of research did you do for The First Protectors?

Victor:  Fortunately, in the internet age, you never have to leave your chair to wander a Russian street or peruse artillery manuals. But that also means you have no excuse not to do those things. So I spent a lot of time in Google Earth, or reading U.S. military websites, or looking up the chemical compositions of various materials or researching theoretical space propulsion systems.

TQ:  Please tell us about the cover for The First Protectors.

Victor:  All credit to the great Amir Zand (https://www.artstation.com/amirzand) for the fantastic cover. That illustration represents a scene in the book where Ben Shepherd, the protagonist, first encounters the alien visitors out in the New Mexico desert.

TQ:  In The First Protectors who was the easiest character to write and why? The hardest and why?

Victor:  I think the “comic relief” characters often feel the easiest to write, at least on the first pass. But as I kept revising, I wanted to dig deeper into these characters. So you just keep peeling away, trying to find their humanity, without sacrificing the tone you want them to bring to the tale. That’s not easy!

TQ:  Does The First Protectors touch on any social issues?

Victor:  It does dig into the political impact that an alien invasion might have, how different governments and populations might react to that news and the chaos pouring down on them from above. I do wonder if any governments keep contingency plans for this sort of thing on a shelf somewhere, just in case.

TQ:  Which question about The First Protectors do you wish someone would ask? Ask it and answer it!

TQ:  Give us one or two of your favorite non-spoilery quotes from The First Protectors.

“But tea did not come from Russia,” Gretchencko said, folding his hands on the table in front of him and ignoring the steam and the storm. “In 1638, an envoy from Tsar Michael I to Altyn Khan, a Mongolian ruler, came back with these dried leaves, a strange gift. But it was not long before Russians saw the value of this new material and adopted tea as our own, a national drink. And you, Lt. Shepherd, are tea, a strange new thing from a very distant place.”

Gretchenko finally lifted his cup and blew softly over the hot liquid, his eyes never leaving his visitors. He sipped, expressionless. “The only question is, are you a gift, or something else?”

Victor:  Possibly a sequel, if readers like The First Protectors. And I’m working on a few unrelated sci-fi novels. So we’ll see!

Victor:  Thanks for the invite! 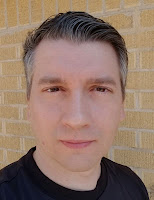 Victor Godinez is a former newspaper reporter and current works in public relations. He lives in Dallas, Texas, with his wife, Sarah, three kids, two dogs and, according to the most recent household census, two guinea pigs. You can find him on twitter @VictorGodinez, where he rambles about self-driving cars, The Simpsons, and sci-fi.