PORTLAND, OR, 12/14/2018 — Tom Parkinson-Morgan, known to his impressive online following as Abbadon, will release a trade paperback collection of the third chapter of his popular ongoing webcomic Kill Six Billion Demons this March from Image Comics.

“In this one there's love, revenge, obsession, a mad god, and a dragon,” said Parkinson-Morgan. “There's also a four-page spread of an army of psychopathic accountant priests fighting colonial soldiers mounted on dinosaurs.”

Sorority sister and possible inheritor to the universe Allison Ruth has been through a lot, but she’s definitely not done yet. She’s got to battle her way to the depths of an infinite treasure fortress in search of a long-lost friend. And along the way, she’ll have to confront not only the dark, criminal past of her closest companion, but also the depths of her own inner lust for power.

It will also be available for purchase across many digital platforms, including the official Image Comics iOS app, Amazon Kindle, Apple Books, comiXology, and Google Play.

“Every panel is stuffed with sumptuous insanity.” —io9

“A visual fantasy in every sense of the word, Kill Six Billion Demons is mysticism writ large.” —All-Comic 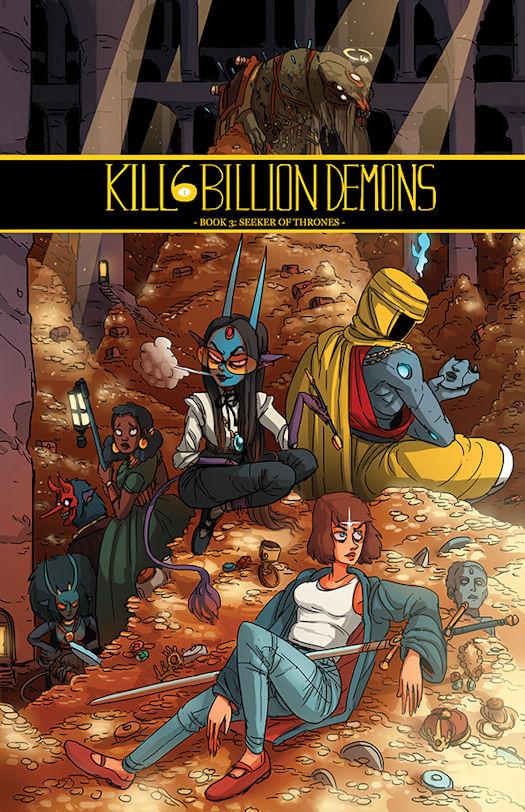 ABOUT IMAGE COMICS
Image Comics is a comic book and graphic novel publisher founded in 1992 by a collective of bestselling artists. Image has since gone on to become one of the largest comics publishers in the United States. Image currently has five partners: Robert Kirkman, Erik Larsen, Todd McFarlane, Marc Silvestri, and Jim Valentino. It consists of five major houses: Todd McFarlane Productions, Top Cow Productions, Shadowline Comics, Skybound Entertainment, and Image Central. Image publishes comics and graphic novels in nearly every genre, sub-genre, and style imaginable. It offers science fiction, fantasy, romance, horror, crime fiction, historical fiction, humor and more by the finest artists and writers working in the medium today. For more information, visit www.imagecomics.com.
Posted by Qwill at 8:37 AM