Please welcome Clay Sanger to The Qwillery as part of the 2018 Debut Author Challenge Interviews. Endsville was published on December 25, 2018 by Crossroad Press. 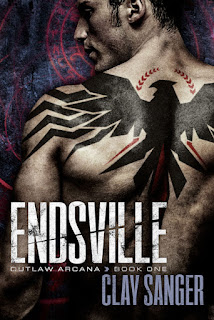 Clay:  I think I was about 12 or 13 when I started writing Forgotten Realms fan-fic short stories that had an actual beginning, middle, and end. I wrote a pretty fair number of those, actually. Long before I ever found out that wasn't how publishing in shared worlds or other people's IP's works. Which was kind of a bummer when I did figure that out.

Clay:  Hybrid. Early development is plotting – a haphazard constellation of Word document fragments, sticky notes, and text messages to myself. Then I sit down to write it and accept that no plot completely survives first contact with the enemy and let the story take me where it decides we need to go. Then I pants it and try to keep up. So, hybrid-cat-herder, I suppose.

Clay:  My attention deficit when it comes to what project I'm going to work on now/next. My brain is buried under an avalanche of stories I'd like to get written – more than I will ever live long enough to actually write. Don’t get me wrong, it's not a bad problem to have, but grabbing hold of one out of the all the swirling debris and sticking with it to the end requires constant conscious effort.

Clay:  The creative influences are huge, not even sure where I'd start drilling down into those. But it was when I read The Crystal Shard by R.A. Salvatore that I first asked myself, "I wonder if I could do this? I wonder if I could write stories?" I was a kid, but I remember that. Very vividly. Everything else sort of flows from that moment. Music influences my writing tremendously. Different music for different projects. And I suppose it was Stephen King that gave a teenage-me the idea I could write anything I damn well pleased.

TQ:  Tell us something about Endsville that is not found in the book description.

Clay:  Fundamentally, it's a story about a family. A toxic, brutal, terminally dysfunctional one, but a family nonetheless.

TQ:  What inspired you to write Endsville? Why did you set the novel in Los Angeles?

Clay:  I love crime stories, and I love occult horror and dark fantasy. I got fixated on the idea that they would blend together nicely, and the rest is history. I originally started delving into the mythos of this world by following the story of the "good guys" – but I quickly fell in love with the "bad guys" and realized I wanted to tell the story from their perspective instead. As to why I set the novel in Los Angeles: I lived in Southern California back in the mid-'90s, and L.A. and the Southern California desert is just a playground of the wonderful and the bizarre. Once I started putting the first snippets of the Outlaw Arcana mythos on paper, I couldn't see it any other way but as an L.A. crime story. With teeth. Literally.

TQ:  What sort of research did you do for Endsville?

Clay:  My bookshelves started filling up with books on secret societies, occult practices, myths, legends, Paganism, and bizarre cults. Pretty sure my Amazon order history looks like the last desperate shopping list of a madman. I also spent a lot of time researching L.A. gangland and Southern California crime dynasties – the good guys, the bad guys, and everything in between.

TQ:  Please tell us about the cover for Endsville.

Clay:  The artist is the incredible Shawn T. King of STK•Kreations. I had the (rare and wonderful) experience of being able to work directly with him during production of the cover art. That's a special treat for an author. After some back and forth, we settled on a depiction of the protagonist Gabriel – and the sigil of the House of the Crow inked on his back – the sign of his rank and station in the family. In the opening chapters of the novel, Gabriel is asked about his Crow tattoo, what it means. His reply tells it all: "It means we're bad people... We lie. We cheat. We steal. We kill. So long as we take out the trash and keep the peace with the other liars, cheaters, thieves, and killers, nobody really cares."

TQ:  In Endsville who was the easiest character to write and why? The hardest and why?

Clay:  The easiest and hardest are the same characters: Gabriel and his sister Delilah. Their lives turn into a tornado of grief, guilt, regret, and trauma in this story while they fight tooth and nail to get a hand back on the reins. That's familiar territory for me, so it's not a hard head-space to get into. And for that reason, getting dressed up with those characters and telling their story takes a toll. It's an easy river to dive into. A damn hard one to climb back out of when I step away from the keyboard for the night. But I suppose it's kind of cathartic too.

TQ:  Does Endsville touch on any social issues?

Clay:  Endsville plants the seeds for some that I'll be delving into deeper as the series unfolds – drug abuse and addiction, toxic and abusive family relationships, and the dangerous spiral of living a life of crime – both by choice and by inescapable circumstances.

TQ:  Which question about Endsville do you wish someone would ask? Ask it and answer it!

Clay:  The question: "So is Endsville really about the bad guys being bad guys?" The answer: "Why, yes, it is." A lot of urban fantasy stories play with the idea – a protagonist who used to be bad but is trying to reform. Bad guys who really do good but no one gives them credit for it. But for this one, I decided I'd go at telling the story of the bad guys with both barrels and didn't look back. It seemed like a good idea. Looking forward to seeing if the readers agree.

TQ:  Give us one or two of your favorite non-spoilery quotes from Endsville.

#1: "No one loves a crow. Scavengers. Thieves. Liars. Harbingers of death. Loyal to and beholden to no one but their own kind. Drawn to the chaos and carnage so they can pick gold from the bones. Good, bad, indifferent. A crow does what a crow does. Nothing commands a crow. Not men. Not kings. Not gods. The House of the Crow lives up to its namesake."

#2: " Choices have consequences. The inescapable gravity of consequence is a real son of a bitch. As anybody who’d ever jumped off a cliff can tell you, gravity kills. When the stop comes, it’s sudden. Then everything breaks."

Clay:  Book 2 of my Outlaw Arcana series is on the workbench, so that's somewhere on the not-too-distant horizon. I have a short story appearing in Knaves: A Blackguards Anthology coming soon from Outland Entertainment. Other novels currently on my workbench: a grimdark dieselpunk fantasy, an apocalyptic space opera, and a straight-up crime thriller. We'll have to see where they go, and whether or not my head explodes into a shower of confetti while juggling them all.

Clay:  Thank you for having me. It was certainly a lot of fun!

Welcome to Los Angeles—where the secret worlds of the criminal and supernatural collide. Crime and black magic pay. In the City of Angels, no one does it better than Gabriel St. John and the House of the Crow…

ENDSVILLE introduces readers to the House of the Crow. Led by their enigmatic street captain Gabriel, the Crows are a secret coven of high-rolling occult gangsters operating out of Los Angeles. A gangland king by the name of Dante Washington enlists their aid to recover 34 million dollars in cash—stolen from him by what appears to be a hostile sorcerer.

The Crows battle through a vicious cycle of betrayal, violence, and black magic while on the hunt for Mr. Washington’s missing money. In the end, allies prove to be enemies, and there are much greater things at stake than covering up a multi-million dollar gangland heist. 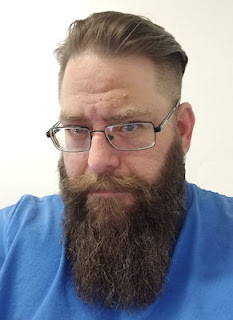 Clay Sanger is a professional technogeek by day and a writer fiction the rest of the time. A life-long lover of all things wild, Clay spent much of his early adulthood wandering the four corners of the country in search of the weird and wonderful, the dark and the light.  As chance would have it he found them. After meandering far and wide he returned to his native Ozarks where he lives with his dazzling wife, their sons, and a menagerie of mythical creatures both real and imagined.