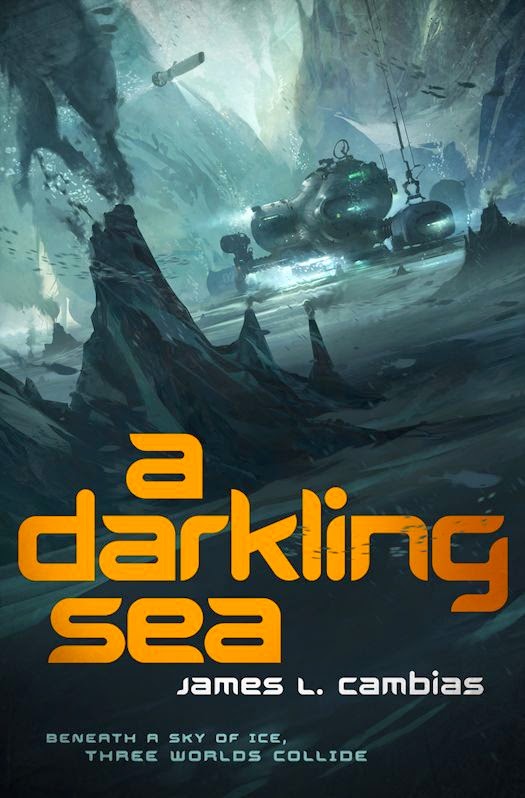 In the early 2020s, two young, genius computer hackers, Elizabeth Santiago and David Schwartz, meet at MIT, where Schwartz is sneaking into classes, and have a brief affair. David is amoral and out for himself, and soon disappears. Elizabeth dreams of technology and space travel and takes a military job after graduating. Nearly ten years later, David is setting himself to become a billionaire by working in the shadows under a multiplicity of names for international thieves, and Elizabeth works in intelligence preventing international space piracy. With robotic mining in space becoming a lucrative part of Earth’s economy, shipments from space are dropped down the gravity well into the oceans. David and Elizabeth fight for dominance of the computer systems controlling ore drop placement in international waters. If David can nudge a shipment 500 miles off its target, his employers can get there first and claim it legally in the open sea. Each one intuits that the other is their real competition but can't prove it. And when Elizabeth loses a major shipment, she leaves government employ to work for a private space company to find a better way to protect shipments. But international piracy has very high stakes and some very evil players. And both Elizabeth and David end up in a world of trouble. Space pirates and computer hackers . . . James L. Cambias's Corsair is a thrilling near-future adventure! 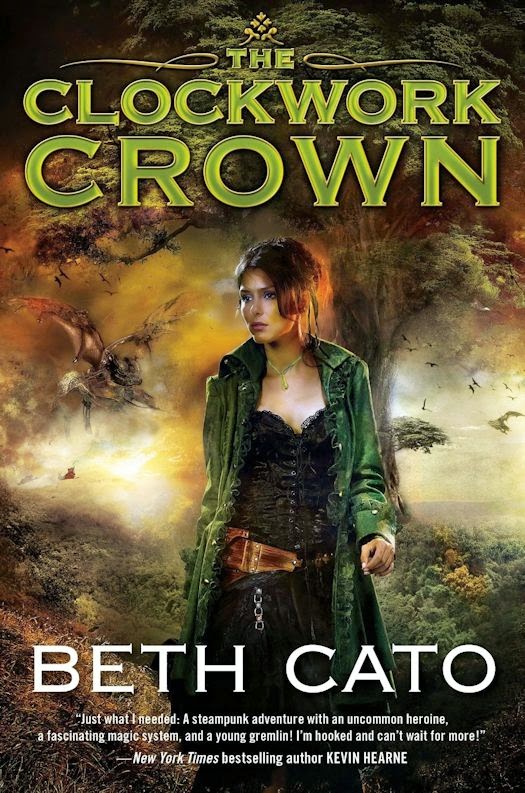 Rich in atmosphere, imagination, and fun, the action-packed, magic-filled sequel to The Clockwork Dagger is an enchanting steampunk fantasy, evocative of the works of Trudi Canavan and Gail Carriger.

Narrowly surviving assassination and capture, Octavia Leander, a powerful magical healer, is on the run with handsome Alonzo Garrett, the Clockwork Dagger who forfeited his career with the Queen’s secret society of spies and killers—and possibly his life—to save her. Now, they are on a dangerous quest to find safety and answers: Why is Octavia so powerful? Why does she seem to be undergoing a transformation unlike any witnessed for hundreds of years?

The truth may rest with the source of her mysterious healing power—the Lady’s Tree. But the tree lies somewhere in a rough, inhospitable territory known as the Waste. Eons ago, this land was made barren and uninhabitable by an evil spell, until a few hardy souls dared to return over the last century. For years, the Waste has waged a bloody battle against the royal court to win its independence—and they need Octavia’s powers to succeed.

Joined by unlikely allies, including a menagerie of gremlin companions, she must evade killers and Clockwork Daggers on a dangerous journey through a world on the brink of deadly civil war. 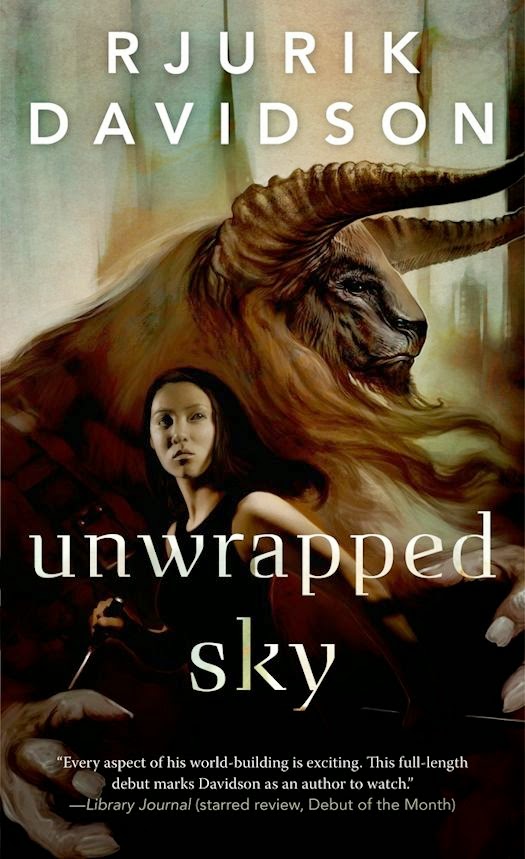 Unwrapped Sky is a stunningly original debut by Rjurik Davidson, a young master of the New Weird.
[Hardcover description]


The Stars Askew (Caeli-Amur 2) will be published by Tor Books in October 2015.  Here is the cover (from the author's website): 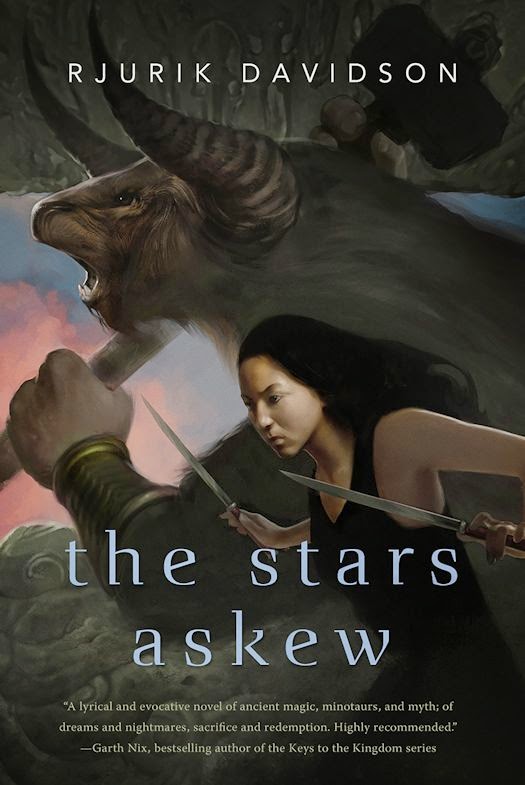 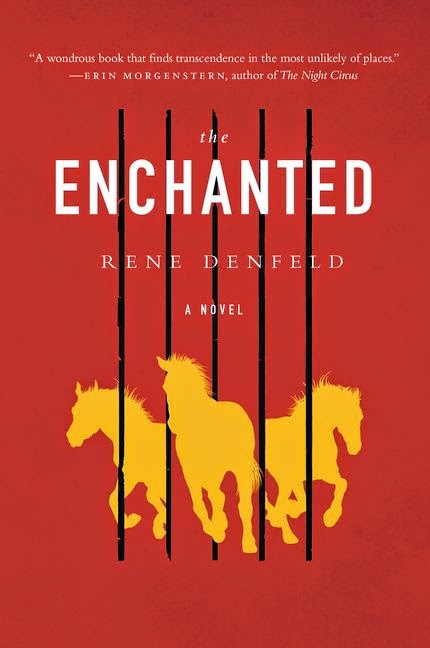 
For the narrator locked inside an ancient prison, waiting for death, life is full of magic, from the golden horses that stampede underground to the tiny men who hammer away inside the stone walls. That the enchanted place is a death row matters less to him than the people he watches from the bars of his cage: the lady, an investigator hired to help the men escape execution; the fallen priest, brought by shame to work the row; and the kindly warden, who ushers men to death.

As the lady digs deep into the past of one of the men on the row, she finds secrets that ring chillingly familiar, and begins a journey that will bring all of them to unexpected salvation.

Guilt and innocence collide in this story of the beauty that can exist in the midst of despair. A luminous novel about redemption, the poetry that can be found in the unfathomable, and the human capacity to transcend even the most nightmarish reality, The Enchanted is a new classic. 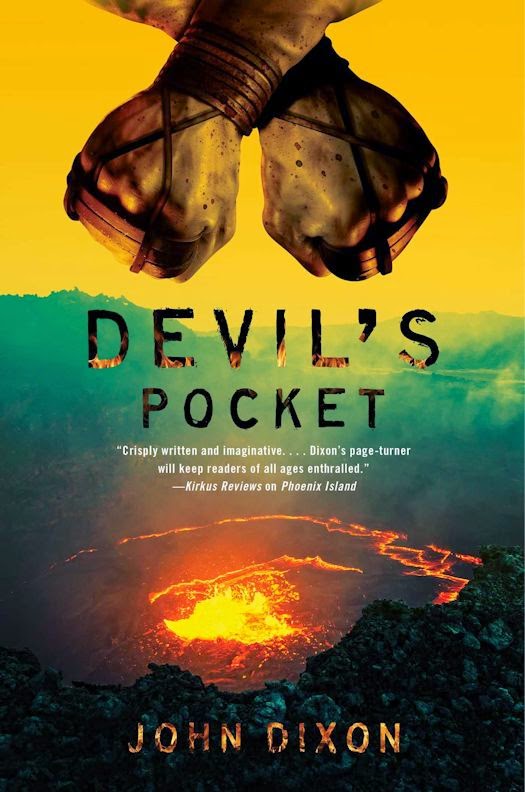 The follow-up to the critically acclaimed Phoenix Island, which reads like “Lord of the Flies meets Wolverine and Cool Hand Luke” (F. Paul Wilson, creator of Repairman Jack) and inspired the CBS TV show Intelligence.

With a chip in his head and hundreds more throughout his body, sixteen-year-old Carl Freeman was turned from an orphan with impulse control issues into a super-soldier. Forced into the mercenary Phoenix Force group, he begins to fear he’ll never escape. Sent to a volcanic island to fight for them, he’ll compete in a combat tournament that awards teens with survival for merciless brutality. But just when all looks lost, he spies a friendly face…and possibly a way out.