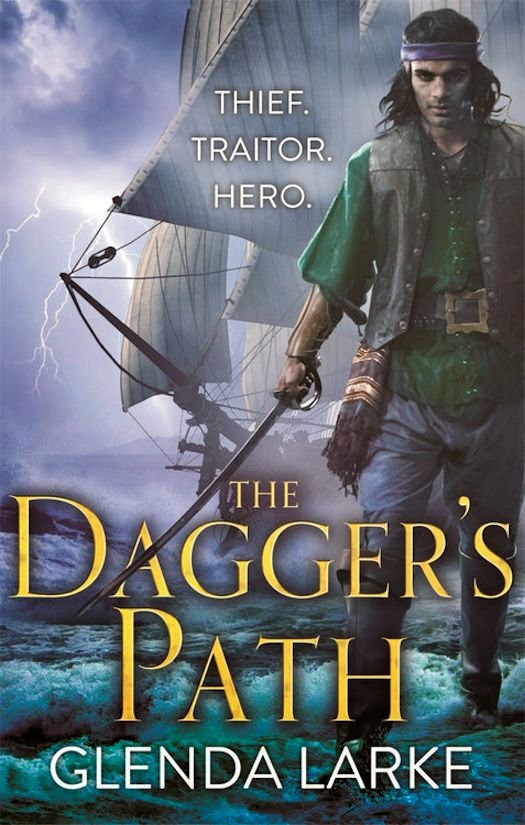 ONLY A TRAITOR CAN SAVE THEM

When sailors came to Ardhi's homeland, they plundered not only its riches, but its magic too. Now disgraced islander Ardhi must retrieve what was stolen, but there are ruthless men after this power, men who will do anything to possess it...

Last year's The Lascar's Dagger was my favorite fantasy book of 2014, so, I'll be honest, I had some pretty high hopes for the second book. Thankfully, The Dagger's Path delivers. It progresses the overall plot of the series, keeps you invested in the characters and introduces new struggles.

Glenda Larke shows great skill at creating engaging characters and perfectly timing their entrance. In the first book, I assumed that Saker Rampion was the protagonist of the series and wondered why Larke spent so much time with Ardhi and Sorrel Redwing. But after reading the second book, I'm convinced this series is more of an ensemble cast of protagonists with seven key players with vital roles that will probably follow into the third book of the series. Despite the large group with varying storylines, I never felt disconnected from them, even when each story was several chapters apart.

At the end of the first book, we left off with Saker, Sorrel and Ardhi on a ship sailing south to the Va-Forsaken Lands. In the second book, we see them struggle to return the golden feathers safely home, while in the Kingdom of Ardrone, Gerelda Brantheld and Peregrine, a 12-year-old boy, are on a mission to discover how the Pitch-men are connected to the Horned Death and Prime Fox. Prince Ryce attempts to free his father from Prime Fox's influence. In the Regality of Lowmeer, Regala Mathilda plots to save her infant son from inheriting his father's family curse.

By spreading her characters out in three different parts of the world, Larke is able to create a fully fleshed-out world. The world continues to grow as we spend time traveling to different locations. We learn more about Ardhi's island home, Chenderawasi, and its unique race; we explore the different factions of the religion of Va and A'Va and their role in the upcoming chaos; and we delve into the character of Prime Fox, his sorcery, and what it might mean for the world at large.

I want to talk for a moment about Larke's pacing and how it differs from traditional fantasy stories. In most cases if an author needs to quicken the pace, we see our heroes battle a monster or some other fast-burning event that makes you rush through the pages. This series is more of a slow burn. It doesn't feel slow while reading it, but there aren't as many battles or monumental events. Instead, Larke creates character struggles that draw you in and your desire to see them resolved makes you continue to read even after you tell yourself you're going to stop for the night.

I'm not saying there aren't battles and action in the book, but I think it's fair to say it's not to the same degree as what most fantasy readers expect. Being a reader that loves a lot of action and battles, I have to say I found just as much enjoyment in this book. So, for any of you who prefer to stick with the ax-wielding dwarves and master swordsmen, give this book a chance.

The Dagger's Path is a wonderful second book in one of the best new series I've read in a while. Larke has created unforgettable characters and an enticing story. The violence is minimal as well as the use of adult language and sexual situations. I would recommend it to older young adults and adults. I'd also recommend it to anyone who likes a page-turner with well-developed characters.