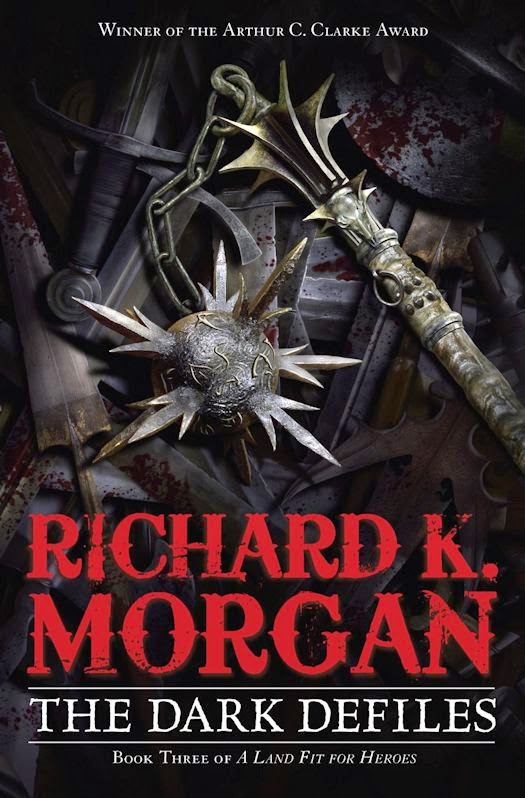 Joe Abercrombie’s Best Served Cold meets George R. R. Martin’s A Game of Thrones in the final novel in Richard K. Morgan’s epic A Land Fit for Heroes trilogy, which burst onto the fantasy scene with The Steel Remains and The Cold Commands.

Ringil Eskiath, a reluctant hero viewed as a corrupt degenerate by the very people who demand his help, has traveled far in search of the Illwrack Changeling, a deathless human sorcerer-warrior raised by the bloodthirsty Aldrain, former rulers of the world. Separated from his companions—Egar the Dragonbane and Archeth—Ringil risks his soul to master a deadly magic that alone can challenge the might of the Changeling. While Archeth and the Dragonbane embark on a trail of blood and tears that ends up exposing long-buried secrets, Ringil finds himself tested as never before, with his life and all existence hanging in the balance.

The Dark Defiles is the long awaited final book of the Land Fit for Heroes trilogy by Richard K Morgan. It has been four years since the last book The Cold Commands was released and it took me a few chapters to get completely back into the dark fantasy world that Morgan has created. The story starts not long after the end of book 2 with Ringil, Egar and Archeth hunting for some artifacts that will help them defeat the dwenda. The trio get separated during an attack by fleet of soldiers looking to capture Ringil. Egar and Archeth continue their search together while Ringil heads off on his own to find a way to defeat the dwenda. Battles between men, monsters and gods is probably the most efficient way of explaining this final instalment of the trilogy.

The Dark Defiles in epic in every sense of the word and it would take too long to explain every twist and turn that Morgan takes the reader through. While I think that Morgan is extremely talented with a wonderfully rich and powerful imagination, I believe that he let his characters run wild in this book. I absolutely adored book 1 - The Steel Remains and thought The Cold Commands dragged a little but book 3 was one of the hardest books for me to finish. I was really engaged with the characters for the first few chapters but almost found myself skipping pages until the final third of the book where it felt like the momentum of the story started to kick back in.  It was this middle part of the book where Morgan exposed the reader to one too many Ringil related sub-plots. He was an excellent character but it felt like Morgan was trying to wrap up every small thread and remind the reader of every antagonist that Ringil ever came across through all of the books. While in contrast more questions were raised for me about Archeth, her people and the Warhelm. Where did ultimately come from, how have they survived and do they have an agenda? Archeth and Egar were a great team as of companions as they were so different and I was more engaged in the chapters that followed their journey.  The book however, was overall far too long. I am not afraid of a long book but there needs to be some balance between characterization and action in order to keep my attention throughout.

I do feel satisfied with how Morgan has ended this trilogy even though it was sad and the epilogue disturbing. I believe he was true to his characters throughout and especially at the end. I was a tiny bit confused about the very final scenes so if someone would like to explain that I would be greatly appreciative. This is not a series for people that are sensitive to extreme violence, lots of sex and three anti-heroes. I am very conflicted on whether to recommend this series as I think this final book let the entire series down. This is also contradictory to many of the other reviews you may read. Had Morgan resisted the temptation to pad about two thirds of the book I think I would have been more enthusiastic about recommending it to others. I can't fault his ability to craft some seriously imaginative dark fantasy but wish he heeded the 'less is more' adage.