Excert from Lucifer by Alexander Kosoris plus a Giveaway - October 17, 2014


Please welcome Alex Kosoris to The Qwillery with an excerpt from Lucifer which was published on September 15, 2014 by Iguana Books. 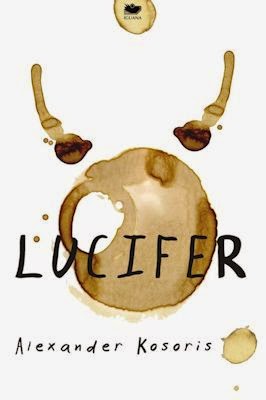 Lucifer worked very hard all week without really considering his special project for God. By Thursday, he felt he should probably attempt something at least resembling rebelling. He spent most of the evening muddling it over in his mind, but he eventually decided to tread the water lightly and do something small that would get angels noticing without getting him in any major trouble.
Friday morning came along, and Lucifer put his plan into action. He spurned his normal business clothes in favor of jeans and a sweater. Ha, he thought, wait until everyone sees me in my casual clothes. This will be sure to cause a mild scandal; these aren’t even business casual.
He walked defiantly up to the office building with his head held high. Stopping in front of the main doors, he took a deep breath. Okay, here goes, Lucifer thought.
He opened the doors and wandered into the lobby. Passing the angel at the front desk, Lucifer decided to bring the scandal to his attention. He smiled, his eyebrows uncontrollably flickering with excitement, and he said, “Good morning.”
The angel looked up and responded, “Good morning.”
This was followed by a brief smile of his own, after which he looked back down. Lucifer found himself a bit disappointed that there was no awkward reaction, but no matter. There was plenty of time for others to appreciate the scandalous nature of his attire.
He walked forward to the main elevator, where his jaw practically fell to the floor. There was an angel in front of him reading the newspaper while she waited for the elevator wearing jeans. He couldn’t believe his eyes. How can this be? he thought. Why in Heaven would someone else decide to wear jeans today?
Ding! The elevator doors opened, and they both stepped inside. The angel pressed the button for her floor, and she looked up at Lucifer. He stared at her for a moment, still puzzling over the scandalous nature of her attire. When he realized what she was waiting for, he finally said, “Oh, uh … number fourteen.”
A small smile crept to her face, and she pressed the button. The doors were beginning to close when someone’s hand reached between them. They opened again, revealing another angel in jeans and a plain dark T-shirt. Lucifer was dumbfounded. The angel pressed a button and stood on the other side of Lucifer.
The doors of the elevator closed, and the two angels stood in silence, one reading her paper, the other looking forward, sipping his coffee, and Lucifer looking from one to the other uneasily. The angel reading her paper looked up at one point, feeling someone’s eyes watching her; sure enough, Lucifer was looking, rubbing his hands and slightly swaying back and forth. Seeing her make eye contact, Lucifer looked to the floor immediately, then up to the ceiling, and then the floor again. An insecure smile reached her face once more, and she went back to her paper, trying to ignore whatever was transpiring beside her.
Ding! The elevator doors opened, and a fidgety Lucifer stepped out onto his floor. He was immediately passed by an angel wearing jeans and a short-sleeved collared shirt with a bright floral print and writing on a clipboard as he walked. Lucifer quickly made his way to his office.
He sat at his desk, still rubbing his hands, staring at the door. Several minutes passed, and then in walked Raphael in jeans and a polo shirt, carrying a briefcase. “Good morn—”
“This is some kind of joke, right?” Lucifer interrupted.
Confused, Raphael stopped in his tracks. He looked behind, then back to Lucifer, eventually responding, “What do you mean?”
“What is going on today?” Lucifer said much more loudly, standing back up.
Raphael just stood silently in the doorway for a moment. Having considered it further, he still couldn’t make heads or tails of Lucifer’s line of questioning. “Um … what are you talking about?”
Lucifer paused. He was frustrated, and it came across noticeably in his voice, “Everyone’s wearing jeans!”
With no response from Raphael, Lucifer shouted, “Why is everyone wearing jeans today?”
Raphael’s confusion grew. He carefully said, “Aren’t … you … wearing jeans?”
Lucifer looked down at his jeans, then back up to Raphael. Frustrated still, he responded, “What does that have to do with anything?”
“Take it easy,” Raphael replied, raising his hands in front of him with his palms out, facing Lucifer. “I’m just saying: If you’re wearing jeans, why are you so confused that everyone else is?”
“Just humor me for a second,” continued Lucifer. “Why is everyone wearing jeans today?”
Looking unsettled, Raphael placed his briefcase on his desk, then wandered slowly to the corkboard on the far wall. He pulled out a tack and removed a sheet of paper. He came back toward Lucifer, cautiously handing him the paper. Dated yesterday, it read:

AS A TOKEN OF EMPLOYEE APPRECIATION, FRIDAYS WILL BE CASUAL DAY AT THE OFFICE, STARTING TOMORROW. SO LEAVE YOUR TIES BEHIND, AND WEAR YOUR JEANS AND T-SHIRTS. HOWEVER, PLEASE DO NOT WEAR ANYTHING THAT OTHER EMPLOYEES MAY FIND INAPPROPRIATE OR OFFENSIVE. ANY COMPLAINTS ABOUT ATTIRE CAN BE BROUGHT TO THE ATTENTION OF YOUR DEPARTMENT MANAGER.

Ding! The elevator doors opened, and out stepped Lucifer. He walked past God’s secretary, who didn’t seem to notice him once again, and approached the open door to God’s office. Looking inside, he could see God beckoning to him.
“Lucifer,” God said with a cheerful demeanor. “Come in, come in. What can I do for you?”
Lucifer said nothing and entered the office.
“Come, sit,” God added, His hand motioning to a chair.
Lucifer didn’t move. He stood there, looking at God, and then at the chair, and back again. Eventually, he reluctantly sat down, a frown on his face. They both were silent, Lucifer thinking of the right words to use, and God waiting patiently for him to use them. Finally, Lucifer asked, “What was that all about?”
God’s cheerful expression changed to a look of confusion. He leaned back in His chair and asked, “What seems to be the trouble?”
Lucifer sat in silence for another moment. He then added, “The dress-down day.”
God merely sat and said nothing.
Lucifer continued, more annoyance in his voice, “Casual Fridays. You know.”
“What do you want Me to tell you, Lucifer?”
“Wearing casual clothes was my act of rebellion,” Lucifer said. With God not responding, he added, “I was rebelling against You through my choice of wardrobe, going against the established business wear.”
God spoke, “Well, it’s unfortunate, then, that your first attempt at rebellion coincided with the very first dress-down day.” He paused momentarily. Seeing that this was not the answer Lucifer was looking for, He went on, “I felt it would make the angels, My employees, more … comfortable to work in casual clothes, that’s all. I sent the memo out yesterday, and it’s too bad that you didn’t see it, but we can’t turn back the clock now, can we?”
Lucifer opened his mouth to continue the conversation, but he thought better of it and stopped himself. God leaned forward slightly, waiting for Lucifer to continue. He said, “Lucifer, you can speak freely. There are no secrets here anyway.”
Lucifer still didn’t say anything.
God continued, “Let Me start you off: ‘But…’” He paused. Lucifer still sat in silence. God added, “‘…You…’” There was another pause, with no response. God said quickly, “‘...knew I was going to try rebelling this way?’”
Lucifer finally piped up, pointing at God as he spoke, “Yeah, You knew I was not going to follow the dress code, even though You sent the memos out yesterday. And … and, knowing what I know, You sent out those memos … preemptively, knowing that it was going to happen. How am I supposed to rebel against You if You make the things I do company policy?”
God sat pondering this for a moment before replying, “Well, I suppose you’ll just have to try harder.”
They both sat in silence. Lucifer eventually added, “But…”
“Yes?” God responded immediately with a smile.
“That’s not fair.”
God’s smile slowly melted into a frown. He sighed, “Lucifer.” God paused, staring at Lucifer before finishing the thought, “Sometimes … life isn’t fair.”
They sat there, saying nothing for several minutes, observing each other. Not ending the silence, Lucifer eventually got out of his chair and slowly made his way out of the office. Passing by God’s secretary, he stopped and turned to her. He considered talking to her, but he quickly dropped that train of thought and just walked past her desk. She made no indication of noticing him. He then continued to the elevator and pressed the button. 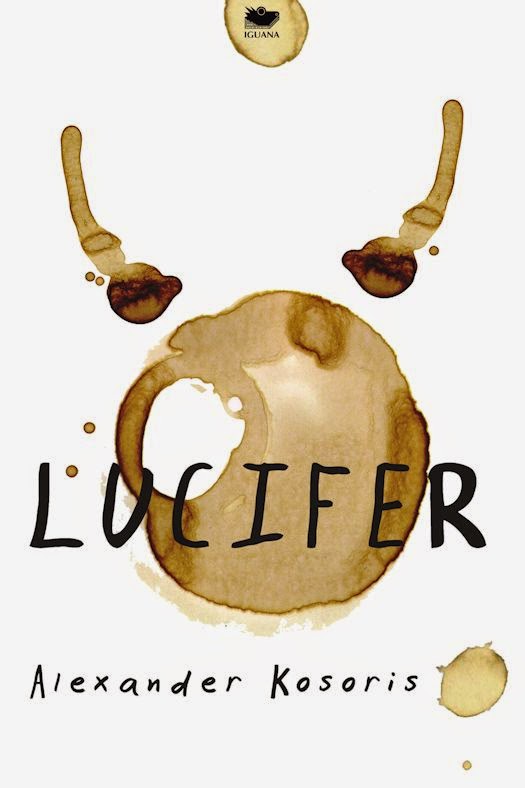 The angels at God’s office complex regularly turn out amazing projects. They’re hard at work on their greatest project yet – the universe – when Lucifer, a lowly angel toiling away on the development of human personality, is summoned by God. God offers Lucifer a big promotion; all Lucifer has to do to get it is rebel against Him. Dubious about having to challenge the all-seeing, all-knowing Creator, Lucifer finds himself butting heads with the other angels in order to see his mission through. Things seem to be coming together for Lucifer’s advancement until God moves up the universe’s release date before anything is ready! Everything spirals out of control as Lucifer attempts to sort it all out. Is there hope for this reluctant angel? 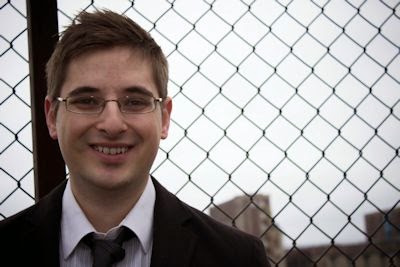 Alexander Kosoris was born and raised in Thunder Bay, Ontario. He lived on residence in Toronto, Ontario while attending the Faculty of Pharmacy at the University of Toronto between 2006 and 2010. While there, he discovered his love of writing, spending much of his free time writing short stories, one of which he expanded to arrive at his first novel, Lucifer. After graduating, Alexander has moved back to Thunder Bay, where he now lives, working as a pharmacist.

Whenever he gets a moment of leisure, Alexander enjoys listening to and playing music, as well as riding his bicycle.

What:  One entrant will win a print copy of Lucifer by Alexander Kosoris. US/CANADA ONLY

Who and When:  The contest is open to all humans on the planet earth with a US or Canadian mailing address. Contest ends at 11:59 PM US Eastern Time on October 25, 2014. Void where prohibited by law. No purchase necessary. You must be 18 years old or older to enter.