For me, Halloween is the end, the crescendo of a long, spectacular season. It’s been months of preparing, getting into the spirit (pardon the pun) of the holiday in true "Haunted Housewife" style. By October 31st, the Willoughby Ghost Walk season is over and the paranormal fundraisers will soon begin. But for that one night, the actual evening of Halloween, I’m not a tour guide, or a ghost hunter, or a paranormal philanthropist. For that night I am just a kid again.

My costume has been meticulously planned for months. Because I live in northeast Ohio, I have to factor in the unpredictability of the weather and the possible need for a quick adjustment. It may be 85 degrees and humid or it could be snowing, you never know. That’s just how it is in Cleveland. My children have to be ready as well. After all, they’re my excuse to trick-or-treat.

Before we embark on the frenzied sugar fest of snack-sized treats, I feed my little goblins dinner. The table is elaborately set with coverings of orange and black. I do my best to set the scene, emulating a picture perfect magazine spread that would make Martha Stewart envious. But I have to go deeper, darker, more Halloweenish than she could ever imagine. Let’s just say my north coast home has an air of authenticity that old Martha can’t touch.

After feeding our faces with the least healthy dinner of the year, we set off to collect our bounty! It’s time to trick-or-treat! I find myself fighting the urge to run ahead, remembering that this is for the kids, I’m only here to escort them safely and keep them from approaching the more questionable houses on the street. Not everyone in the neighborhood gets into the spirit of Halloween. Some close the blinds and shut off the lights as if to ward off the evil little treat-seeking monsters who dare knock on their darkened door.

Hours later, If I’ve done my job properly, the kids return home with a heavy sack of goodies and satisfied smile. They’ve managed not to get hit by a car, trip on their costumes, or swallow any razor blades. I’ve embarrass them just enough with my outrageous and horrifying costume that I’ll be forgiven by next year. My freakish make-up has scared a few toddlers and given the neighbors another reason to think I’m the weirdest mother on the block.

And then it’s done. Porch lights off and candy haphazardly splayed out on the carpet ready to be sorted. A thorough scrub of the kids faces and teeth and they’re off to bed. My stomach hurts and my heart aches. It’s a huge emotional crash for me, a melancholy moment of knowing it’s over. I drown my sorrows in more candy and zone out on a scary movie. I’ll eventually fall asleep, dreaming of monsters and ghosts of every kind. Come tomorrow I’m back to being a grown up.

Goodnight Halloween, I bid you farewell until next year, when I get to be a kid all over again.

The Power of Halloween
Eric Olsen
America's Most Haunted

Our Season of Darkness begins materializing toward the end of September when the doors creak open at haunted attractions and pop-up Halloween stores, heralding the true end of summer.

We check out the stores periodically throughout the season to see what’s new, get decorating and costume ideas, and soak up the commercial-but-creepy ambience. At home, my wife quietly breaks out a few noncommittal fall decorations, which over the next few weeks will be augmented with overt symbols of fear and magic. We ease into our spooky viewing routine: not much outright “horror” per se, at least at first, but Halloween-specific perennials that satisfy the disparate tastes of a 14 year-old girl, 10 year-old boy, and their busy, distracted parents.

Among the never-misses are charming, atmospheric “It’s the Great Pumpkin, Charlie Brown“; wicked and delightful “Hocus Pocus“; Jill Thompson’s imaginative and unhinged “Scary Godmother” specials; oddly touching, insightful “Under Wraps“; and R.L Stine’s towering achievement “When Good Ghouls Go Bad.” “Ghouls” stirs the imagination, plucks the heartstrings, and touches upon something ancient and deep at the end as reanimated townsfolk -- after all, they’re just no-longer-living friends and relatives -- waltz upward into the mist, the magic of Halloween fades and the veil between this world and the next is restored.

The power of Halloween strikes me hardest when October’s full moon arises - this year a lunar extravaganza of Harvest Moon, Blood Moon, and Super Moon conflating on October 8. As I stand outside in the crystalline cool of a silent Northeast Ohio night, I feel a tug from the same effulgent orb as my ancestors, stretching back hundreds and thousands of years. I apprehend the link between the natural and supernatural, inextricably bound, as leaves scream out in colorful agony before falling to their deaths, and all living things begin to hunker down for the winter ahead.

No wonder man’s thoughts have always turned toward the dead -- and their intentions -- at this time of year. Rituals of disguise, appeasement, and distraction have evolved over millennia and are very recognizable today. It is a time of awe, magic, and fear; and is variously know as Samhain, Dios de los Muertos, and Halloween. 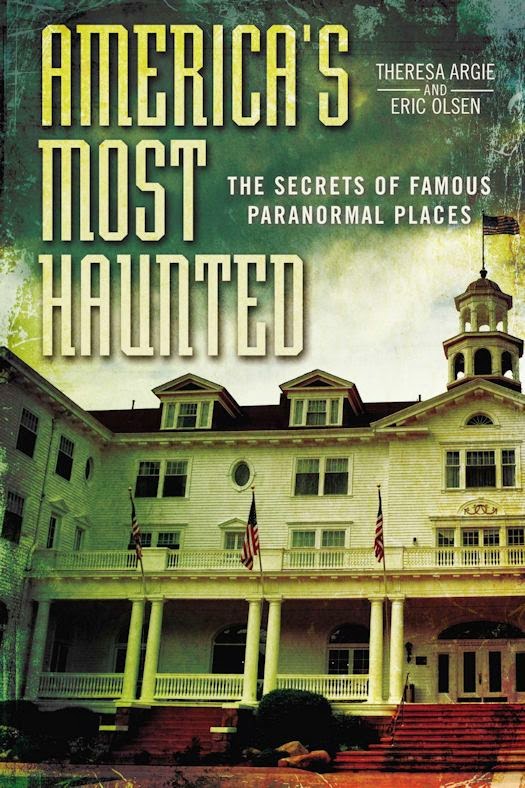 Throughout the United States, there are places haunted by souls both malevolent and benign. Places where paranormal activity runs rampant. Places where we can glimpse the other side…

In America’s Most Haunted, “Haunted Housewife” investigator Theresa Argie and journalist Eric Olsen team up to take you on a first-person tour of some of America’s most active paranormal hotspots.

Experience the crawl through the death tunnel where visitors have reported sightings of an inhuman creature that creeps along the walls and ceilings. Walk the decks of the Queen Mary with the hundreds of souls that met their ends in watery graves. And get to know the spirits that wait in jails, mansions, lunatic asylums, and even a stately old hotel.

Combining spine-tingling stories, documented evidence, and interviews with some of the top names in paranormal investigation—including the stars of TV’s “Ghost Hunters,” “Ghost Adventures,” and more—America’s Most Haunted gives you a terrifying chance to tour our nation’s most famous haunted places.

Are you brave enough to take a look?

Theresa Argie, a.k.a "The Haunted Housewife," is an experienced paranormal investigator who has worked with some of the field's most well-respected experts. Theresa has been on several television shows, including "Paranormal Challenge" and "My Ghost Story." Eric Olsen is a leading journalist in the field of paranormal investigation. He is also a published author, media personality and respected blogger. Together, the two host the internet radio show, "America's Most Haunted."

What:  One entrant will win a Trade Paperback copy of America's Most Haunted by Theresa Argie and Eric Olsen.

Who and When: The contest is open to all humans on the planet earth with a mailing address. Contest ends at 11:59 PM US Eastern Time on November 7, 2014. Void where prohibited by law. No purchase necessary. You must be 18 years old or older to enter.