Interview with Ethan Reid, author of The Undying: An Apocalyptic Thriller - October 9, 2014


Please welcome Ethan Reid to The Qwillery as part of the 2014 Debut Author Challenge Interviews. The Undying: An Apocalyptic Thriller was published on October 7th by Simon451. 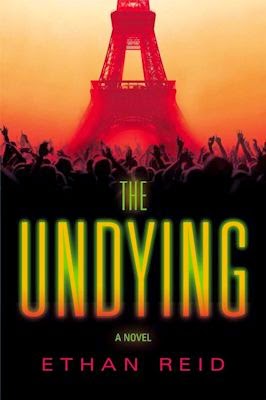 Ethan:  As a kid, to be honest. This may sound corny, but I remember my mother helping me set up a lemonade stand when I was about seven. She baked cookies, helped get the table going, and then I spent the afternoon crafting comic books for sale alongside the treats. I only sold one, but I remember the gentleman to this day. Later, I was a bit of a punk in high school. I had an English teacher who wasn’t overly fond of me until we started with the writing portion of his class. He took me aside and told me I should think about being a writer. That continued through undergrad, and later in graduate school. I don’t remember a time when I wasn’t writing. I don’t know how I would exist without it.

Ethan:  Oh, do I have to chose? I love the idea of being a pantser. Or maybe I just love the naughtiness of the word. I’m probably a plotter. My wife laughed at me when I replied to another interview saying I was meticulous in my plot creation. Obsessed was the term she used. I spend a lot of time plotting the manuscript out before I start writing. Besides really needing to know the end, I have certain elements each book part and chapter must contain before I sit down and start cranking away.

Ethan:  Finding the time to shut out the rest of the world and just write? I love every aspect of writing, from creation to revision to getting notes from my editor and starting the process all over again. But the way a writing career works in today’s world, so much time gets spent in social media, etc, that I feel it interferes with writing. I rarely even find the time to blog, sadly.

Ethan:  I love this question! I have so many. Stephen King was huge for me when I was younger. Clive Barker. Anne Rice. Richard Matheson is one of my favorites. Such craft. Michael Crichton. Ray Bradbury. H.P. Lovecraft was a great inspiration. William Gibson. Joe R. Lansdale. Scott Smith. Of late I’ve been enjoying Andrew Pyper. Of course I also read the current biggies -- Susan Collins, George R.R. Martin.

Ethan:  After a mysterious event plunges Paris into darkness, a young American must lead her friends to safety—and escape the ravenous undying who roam the crumbling city.

Jeanie arrives in Paris for New Year’s Eve, partying until midnight when the lights go out. By morning, fireballs rain from the sky and temperatures rise. Hearing word of a comet strike, her journey takes her from the Latin Quarter to the catacombs and the Louvre. Yet she knows the worst is yet to come as she’s the only person who has witnessed the pale, vampiric survivors.

These cunning beings are known as les moribund and their numbers increase by the hour. When fate places a newborn boy in her care, Jeanie stops at nothing to keep the infant safe and escape Paris—even if she must leave all hope of rescue behind.

TQ:  Tell us something about The Undying that is not in the book description.

Ethan:  Jeanie travels to Paris from Seattle with her good friend, Ben. A lot of the book centers around their relationship, and how they deal with the horrible events they are witnessing. They make their journey in the book with a group of friends they’ve met in Paris, one being an exchange student who lived with Jeanie for a short while. There is also a little bit of a love story.

TQ:  What inspired you to write The Undying? Why did you set the novel in Paris, France?

Ethan:  I have family living in the Latin Quarter and have been lucky enough to travel to the city many times. I simply adore Paris. In part I wanted to convey that feeling of discovery one gets when they reach a new city in a foreign country for the first time. And then have it all come crashing down, when the you-know-what hits the fan.

TQ:  What sort of research did you do for The Undying?

Ethan:  I had to research the catacombs, which isn’t as easy as one might think. And the history of Paris. I love adding little tidbits of history here and there. Jeanie is an Art History major, so she gets to give her own outlook on the city, and its fabulous history, as it is literally blown to bits before her. I enjoyed doing the technical research, too . I won’t give anything away, but after a worldwide electromagnetic pulse, communication – and how quickly humanity can reestablish those links – is paramount to survival.

TQ:  In The Undying who was the easiest character to write and why? The hardest and why?

Ethan:  At first I wanted to say Zou Zou, Jeanie’s Parisian exchange student. She has a lot of fire in her, born from a difficult life. She is also the yin to Jeanie’s yang early on, and as the story progresses, must lean more and more on Jeanie to try and live through the day. When I just read that last part aloud to my wife, she told me I was way off and that my voice is better within Ben. I guess Ben is in some ways my hardest yet easiest character to write, given how complicated he is. I’ve found Ben can also be a lynchpin for readers. In the end, Ben is Ben. He can’t change who he is.

TQ:  Give us one or two of your favorite non-spoilery lines from The Undying.

Ethan:  Can I start with the top? Here’s the first paragraph in Chapter One:

Her flight from Seattle arrived in Paris on New Year’s Eve, touching down at Charles de Gaulle Airport shortly after noon. Enough time to negotiate customs, catch the train to the Latin Quarter, find the hotel and unpack -- even split a bottle of red wine with her travel companion, Ben Rosenfeld, before heading out for the party. After the last twelve months, saying goodbye to a shit year was exactly what the doctor ordered.

And the next few lines come from the morning after New Year’s, when Jeanie awakes after the city-wide blackout to find the power still out:

Jeanie awoke to a headache and the rolling sound of crashing waves.

The hotel room was so dark, she thought it was still night. With a groan, she sat up, her temples throbbing in protest. Stupid, she thought, not downing her mandatory three glasses of water after an evening of indulging, afraid of what may lurk in Parisian pipes.

Guessing the odd noise was the morning commute, she grabbed her father’s watch from the nightstand. 8:42 a.m. Jeanie sighed. She should ring Ben, meet for the hotel’s complimentary continental breakfast before ten. Instead, she fell back and pulled the duvet tight. Being on vacation meant she could do what she wanted, when she wanted, darn it.

Everything heats up rather quickly after that.

Ethan:  I’m off to the NY Comic Con in New York, appearing on a panel two days after The Undying‘s release date. I’ll be at the Simon451 booth, if anyone wants to drop by! I’m also editing the second book in The Undying series, set for a 2015 release, while writing the third.

Ethan:  You bet, thanks for sharing! 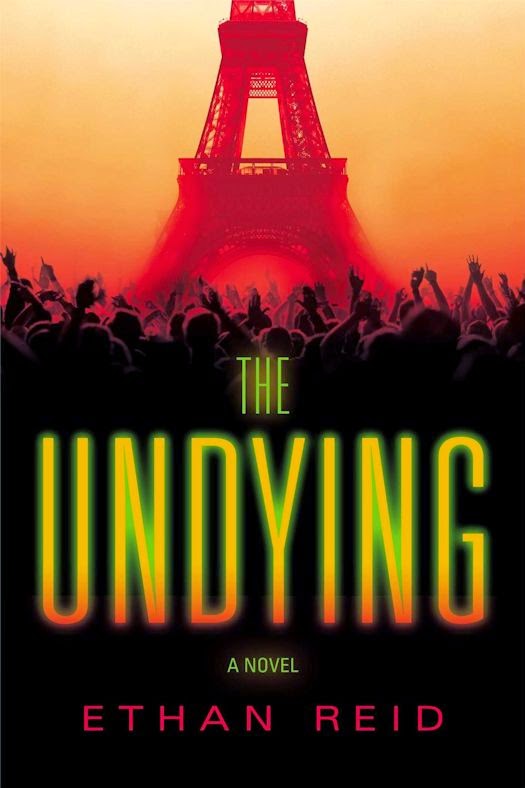 THEY HAVE COME FROM THE STARS…
In this riveting apocalyptic thriller for fans of The Passage and The Walking Dead, a mysterious event plunges Paris into darkness and a young American must lead her friends to safety—and escape the ravenous “undying” who now roam the crumbling city.

Jeanie and Ben arrive in Paris just in time for a festive New Year’s Eve celebration with local friends. They eat and drink and carry on until suddenly, at midnight, all the lights go out. Everywhere they look, buildings and streets are dark, as though the legendary Parisian revelry has somehow short circuited the entire city.

By the next morning, all hell has broken loose. Fireballs rain down from the sky, the temperatures are rising, and people run screaming through the streets. Whatever has happened in Paris—rumors are of a comet striking the earth—Jeanie and Ben have no way of knowing how far it has spread, or how much worse it will get. As they attempt to flee the burning Latin Quarter—a harrowing journey that takes them across the city, descending deep into the catacombs, and eventually to a makeshift barracks at the Louvre Museum—Jeanie knows the worst is yet to come. So far, only she has witnessed pale, vampiric survivors who seem to exert a powerful hold on her whenever she catches them in her sights.

These cunning, ravenous beings will come to be known as les moribund—the undying—and their numbers increase by the hour. When fate places a newborn boy in her care, Jeanie will stop at nothing to keep the infant safe and get out of Paris—even if it means facing off against the moribund and leaving Ben—and any hope of rescue—behind.

Ethan Reid received his BA in English with Writing Emphasis from the University of Washington and his MFA from the University of Southern California’s MPW Program, where he studied under author S.L. Stebel, Oscar-nominated screenwriter Sy Gomberg, and Oscar-winning screenwriter Frank Tarloff. Ethan is a member of the Horror Writers Association, the International Thriller Writers and the Pacific Northwest Writers Association. Ethan currently lives in Seattle.