To close out Paranormal Mystery Month, we have M. J. Holliday from the Ghost Hunter Mysteries written by the fabulous Victoria Laurie!  Victoria also writes the Psychic Eye Mysteries (and more).

Hey there, M. J. Holliday here. Ghostbuster by trade, kicker of ghoulie ass by necessity.
Tonight, October 31st marks the worst day of the year for me and my crew. Oh, yeah, it might seem like all fun and games as you and your kids get all dressed up in some creatively spooky costume and parade up and down the streets collecting candy, scaring the neighbors, or TP the house on the corner with the lights out when clearly someone’s home.
But it’s no fun and certainly no game for me. I deal with the real thing. The real Halloween. All Saint’s Eve. The one night a year when the veil between our world and the lower realms – the one that many evil ghoulies haunt like a local tavern – thins.
For me and my ghostbusting crew, (my BFF Gilley and my sweetheart Heath), the result is usually a cross between Nightmare on Elm Street and Platoon.
Around eight o’clock my cell will start ringing, ‘cause some of you decided to get out that Ouija board in between trick-or-treaters, or host a séance for some party guests, or make your house so attractive to the spooks by decorating it to its creepy limits and charging up the ether with all that fear from the little ones, that a tear in the veil will allow the ghoulies to freely enter your home sweet home.
It usually begins with a flickering of the lights. Just a quick flash of darkness that you’ll shrug off to a surge in the current. Then, maybe there’ll be a creak upstairs. Perhaps some disembodied footsteps. Following that, maybe a door will slam, or a photo of a deceased loved one will fall off the wall. You might shrug a few of these off for a bit, but as the hour grows late and the streets empty of children and your guests head home, a cold chill will start to fill your house. You’ll check all the windows of course, looking for the source of the draft, and maybe you’ll venture upstairs. Maybe the lights will flicker again. You’ll pause on the staircase and wait, but nothing more will come and you’ll keep advancing up the steps. Then maybe there’ll be a creak. A moan. And the haunting sound of quiet…distant…laughter.
The hair on the back of your neck will stand on end and goosepimples will line your arms. You’ll hold your breath, tell yourself that it’s just your imagination, but then…but then there’ll be a whisper of something from somewhere behind you even though you’re certain you’re the only one upstairs. Perhaps it’ll be a rustling of clothing. Maybe the barest sound of your name. But something will feel like it’s standing right behind you on the landing, and as you turn your head slooooowly around, you’ll realize, you really did venture upstairs alone.
Or so you thought.
And then maybe another door will slam. Or the walls will start to ooze a gooey gray substance – ectoplasm – and then you’ll feel that touch to your shoulder, or the weight of someone not there, but there will press up against you. You’ll scream, and then you’ll turn to flee, but as you descend the stairs you’ll swear someone is giving chase. Maybe you’ll scream again. Maybe you won’t. Maybe you’ll be too terrified and no sound will come from your throat. Maybe you’ll simply race out of the house and give me a call.
Which is fine. I’ll be there soon. Armed with magnets to target the electromagnetic energy of your house, sending the spooks scurrying, and stakes to drive into that tear you created for them to climb through. I’ll save you butt while kicking theirs. But it’ll cost you. I’m not cheap, and these busts aren’t child’s play. Trust me on that at least.
So remember, this Halloween if you want to get out the Ouija board, or host a séance, or turn your home into that house on Elm – go for it. Just remember to get out your checkbook and put my number on speed dial. Look me up. I’m in the book under kicker of ghoulie asses. Pinkie swear. 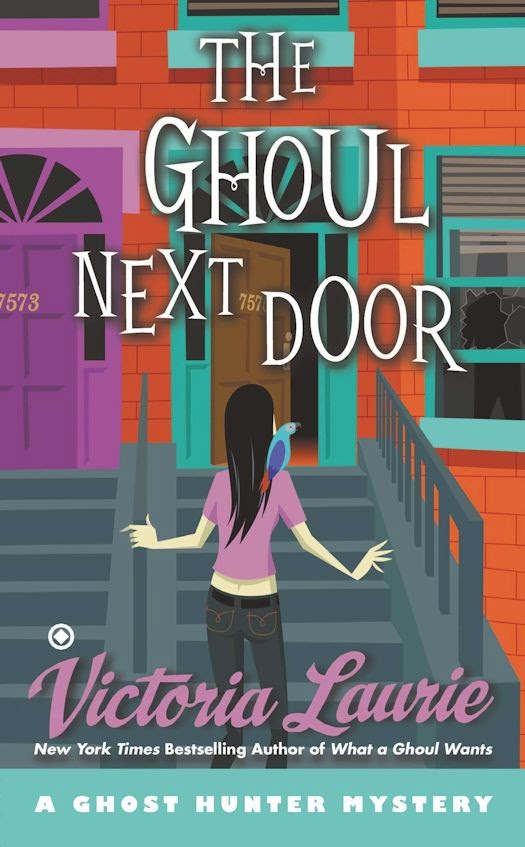 On a well-deserved hiatus from the ghoulish grind of their TV show, Ghoul Getters, psychic medium M. J. Holliday, her boyfriend, Heath, and her best friend, Gilley, are back home in Boston. But there’s no rest for the weary ghost busters. M. J.’s ex comes to her for help—his fiancée’s brother Luke seems haunted by a sinister spirit.

The crew sets up surveillance cameras to watch for the possessive poltergeist while Luke is sleeping. But when he goes outside in the middle of the night and returns hours later covered in blood, they are all very concerned—especially when the news reports the murder of a young woman in the neighborhood.

Now M. J., Heath, and Gilley must remain self-possessed as they try to stop a wicked ghost whose behavior is anything but neighborly. 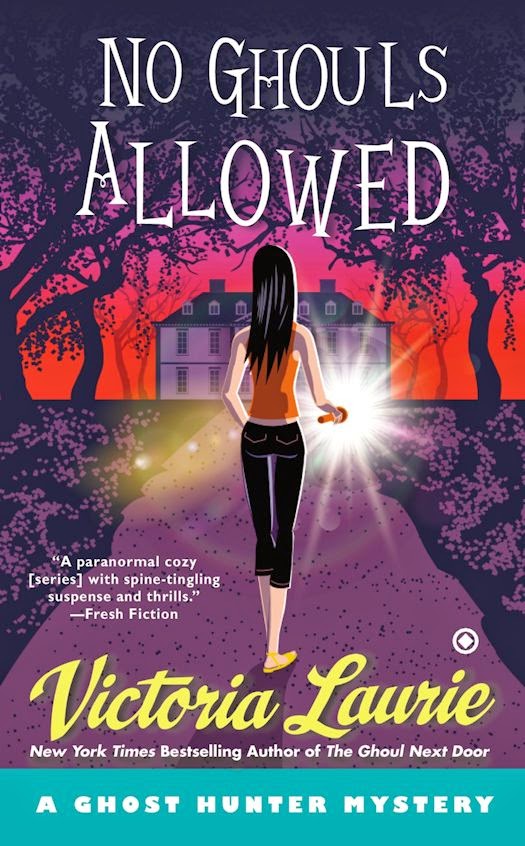 On a trip to Georgia to see her father, M. J. Holliday finds herself trapped in a haunted mansion and discovers…

THE SOUTH WILL RISE AGAIN—FROM THE DEAD

M.J. has had a distant relationship with her father since her mother died more than two decades ago. But when M.J., her boyfriend, Heath, and BFF, Gilley, take a break from their show, Ghoul Getters, and visit her family home in Valdosta, Georgia, they find Montgomery Holliday a changed man. The source of his happiness seems to be his new fiancée, the charming Christine Bigelow.

But despite the blush of new love, Montgomery and Christine are dealing with a big problem in the form of the antebellum mansion she is having renovated. After a series of strange accidents, the work crew is convinced the place is cursed, and the contractor has walked off the job. At Christine’s request, M.J. and her pals agree to find out if they’re really dealing with some spirited saboteurs and a possessed plantation home.

To see all of the Ghost Hunter Mysteries with covers descriptions and buy links,
please click Read more below. 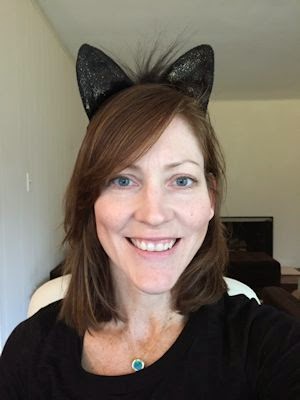 What:  One entrant will win 1 Mass Market Paperback copy of her/his choice of Ghost Hunter Mysteries 1 - 8 by Victoria Laurie.

Who and When: The contest is open to all humans on the planet earth with a mailing address. Contest ends at 11:59 PM US Eastern Time on November 15, 2014. Void where prohibitedby law. No purchase necessary. You must be 18 years old or older to enter. 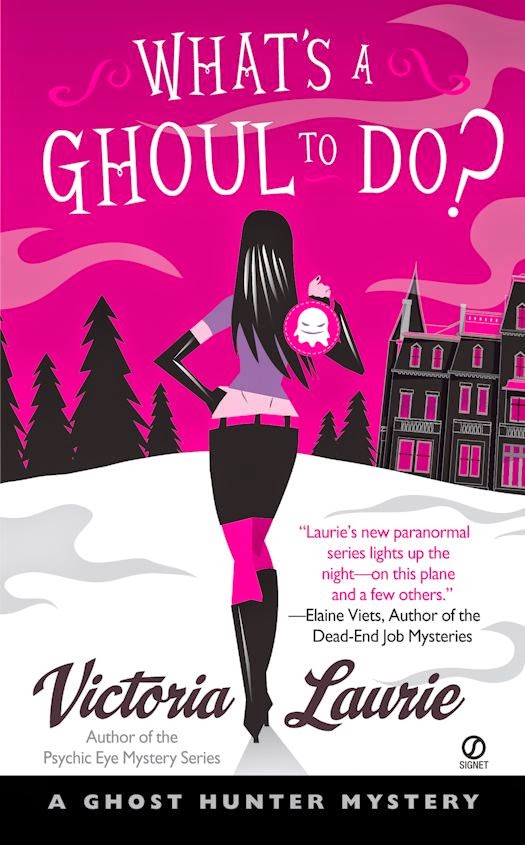 M.J., her partner Gilley, and their client, the wealthy, de-lish Dr. Steven Sable, are at his family's lodge, where his grandfather allegedly jumped to his death from the roof-although Sable says it was foul play. But the patriarch's isn't the only ghost around. The place is lousy with souls, all with something to get off their ghoulish chests. Now M.J. will have to to quell the clamor-and listen for a voice with the answers... 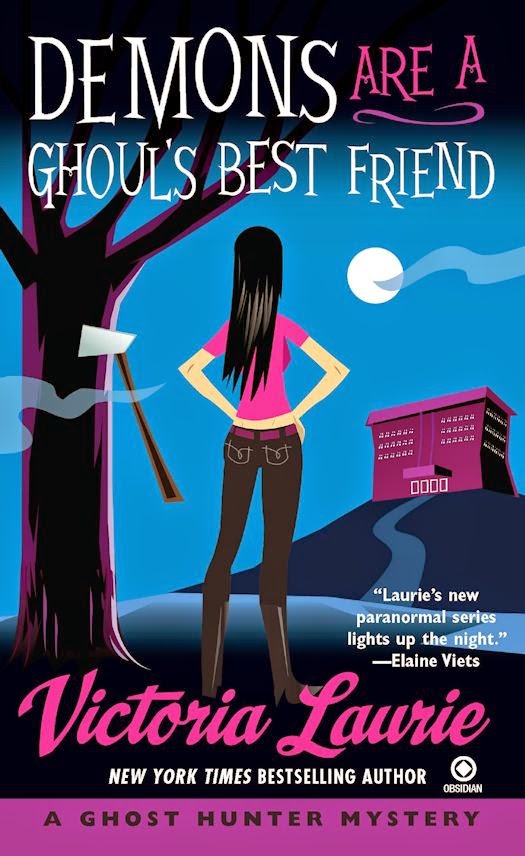 Victoria Laurie's ghoulishly great follow-up to What's a Ghoul to Do? in her new Ghost Hunter Mystery series

Northelm Boarding School on Lake Placid has the worst bully of all-a demon by the name of Hatchet Jack. M.J. Holliday, along with her partners Gilley and the handsome Dr. Steven Sable, are ready to send him back to the portal from whence he came. The school's summer construction, an uncooperative dean, and the very tempting Dr. Delicious are all trying to distract M.J. from her ghost hunting. But with a demonic disturbance as great as Hatchet Jack, she must focus and show no mercy to send him to detention for an eternity-in hell. 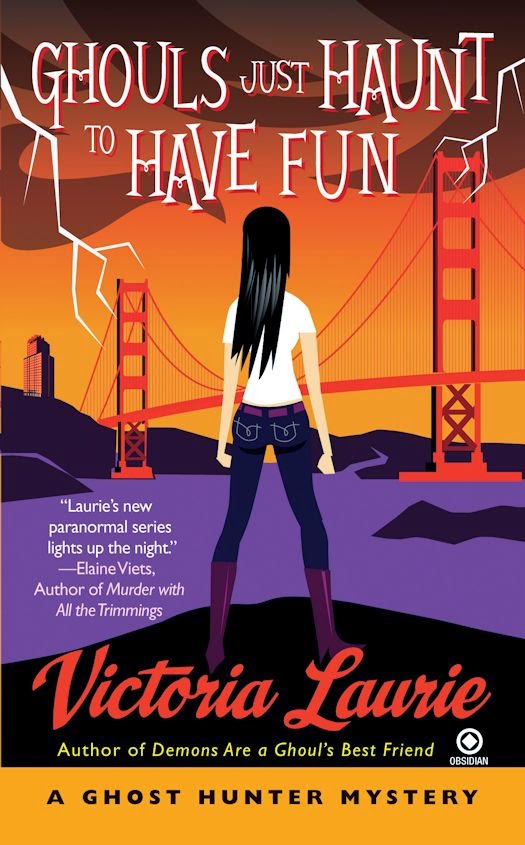 When ghost hunter and medium M.J. Holliday appears on a television show called Haunted Possessions, she encounters an evil knife that releases a demon. Now all hell has broken loose in the haunted hotel where M.J. is staying—and it’s up to her to give the uninvited guest an early checkout. 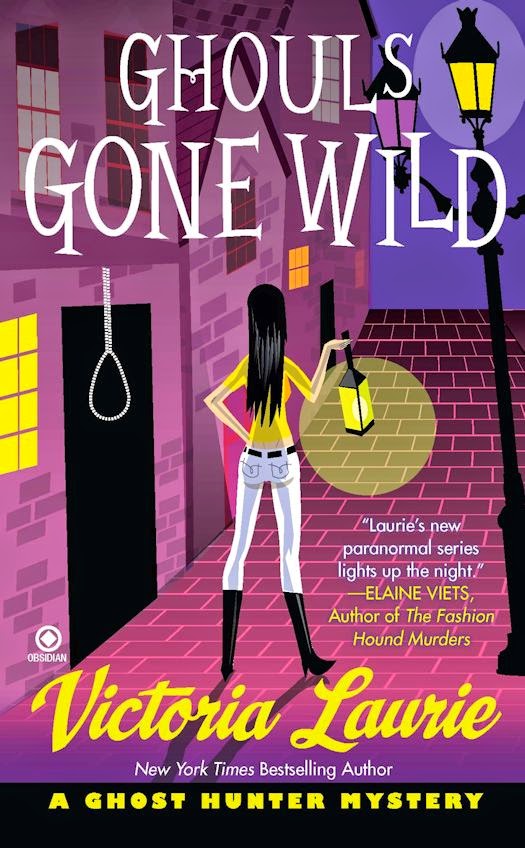 New in the national bestselling series

Psychic M.J. Holliday finds herself in a witchy situation...

When M.J. and her friends travel to a small town near Edinburgh, Scotland, to film the first installment of their new cable TV show Ghoul Getters, they find plenty of spooky action in a series of supposedly haunted caverns. But when they discover the body of a maintenance worker, the cause of death is reminiscent of an old legend involving a witch's wrath... 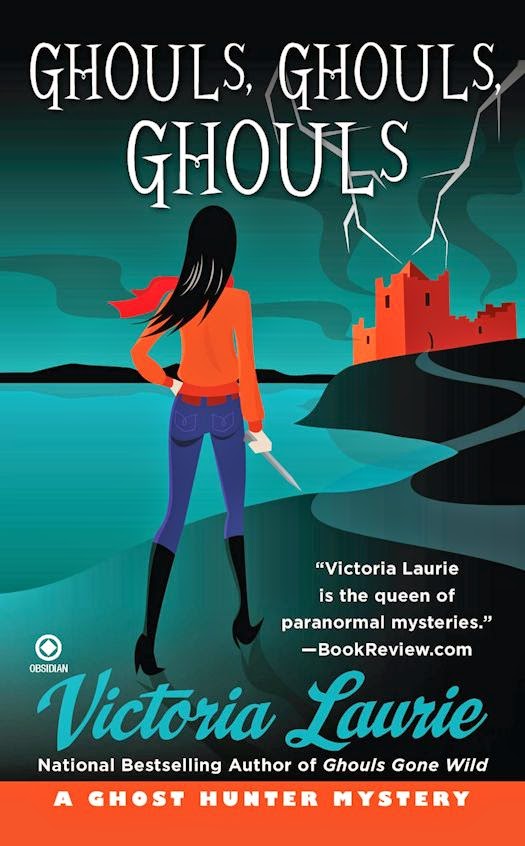 When M.J. Holliday and the crew of her cable TV show, Ghoul Getters, venture to the haunted ruins of Dunlow Castle in Ireland, drawn by the legend of hidden treasure, they hope the road will rise up to meet them, that the wind will always be at their backs-and that the resident phantom won't push them off a cliff. If they treasure their lives, M.J. and her ghost busters need to get the drop on the menacing phantom... 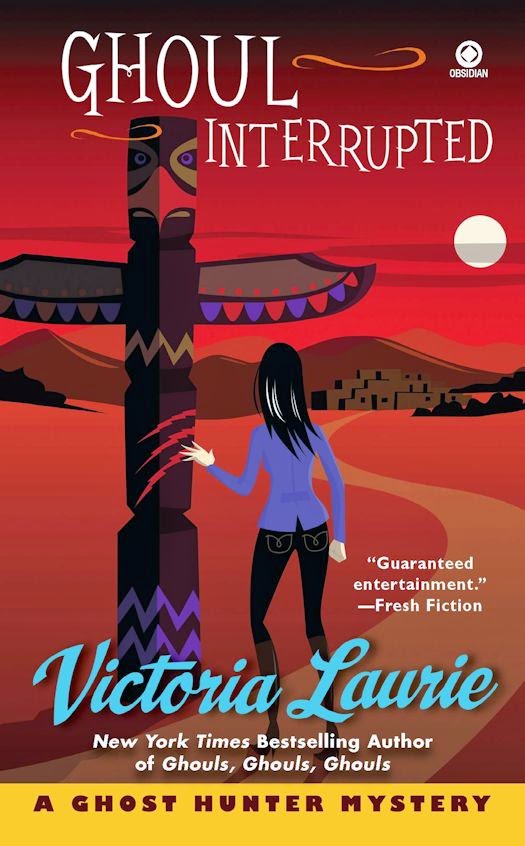 M.J. Holliday and her crew interrupt the frantic schedule of their reality TV show, Ghoul Getters, and hotfoot it to New Mexico, where a dreadful demon is waging tribal warfare. Same Whitefeather- M.J.'s spirit guide-urgently needs her help to stop this evil spirit from wiping out the descendants of his tribe. It doesn't take a psychic to predict that M.J.'s going to have a devil of a time making New Mexico a demon-free zone. 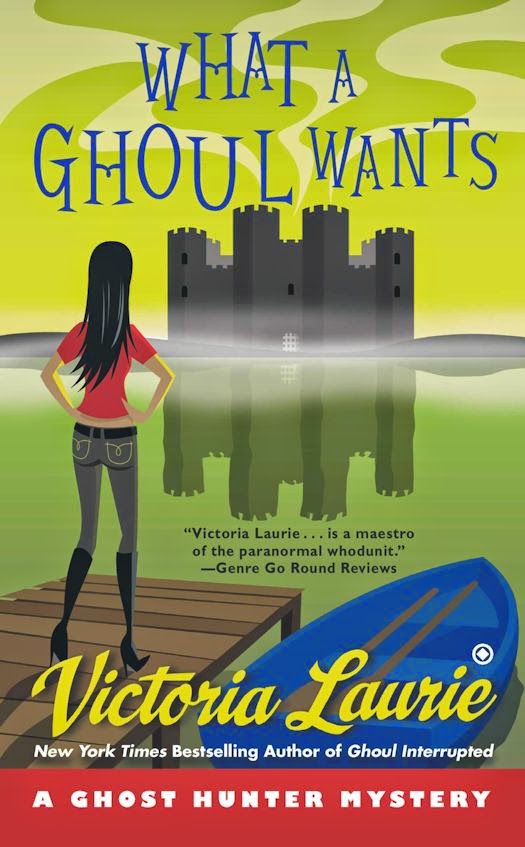 M. J. Holliday has the unusual ability to talk to the dead. But when it comes to a vengeful ghost and a mysterious drowning, this time she may be in over her head….

Kidwella Castle in northern Wales is rumored to be haunted by a deadly ghost—the Grim Widow, who allegedly drowns unsuspecting guests in the castle’s moat. Not long after M. J. and her crew arrive at the castle to film their ghost-hunting cable TV show, Ghoul Getters, two new victims are added to the Widow’s grisly roster.

Fear ripples through the castle, especially when it’s discovered that the victims may have had help into their watery graves from the land of the living. The local inspector suspects father-son serial killers, but M. J. thinks that theory is all wet. To catch the true culprit she will need to dive deep into the castle’s past and bring some long buried secrets to the surface.