It used to be my idea of celebrating Halloween was to cram as many mini Snickers bars as I could into the freezer and then spend Halloween night eating them all. Things that go bump in the night scare me and I might be a tiny bit afraid of the dark, so I was never one to put on a costume and hit the streets. The only pumpkin I like is in Starbucks’ Pumpkin Spice Latte.

So why is she sitting in my living room? 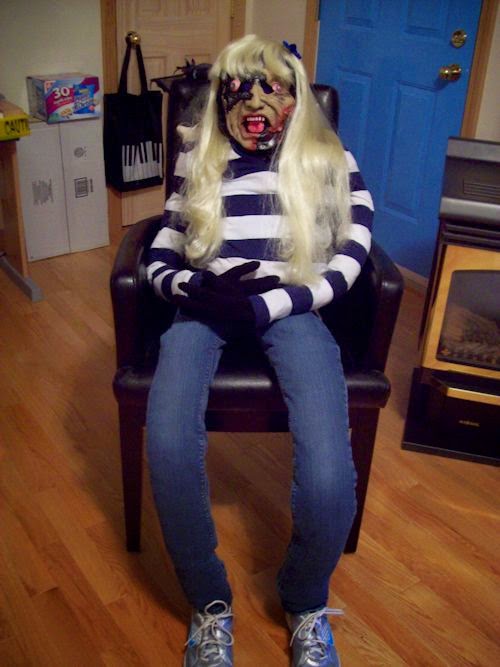 Because the universe, with a perverse sense of humor, gifted me with a child who LOVES Halloween. She’s loved it since her Dad took her to pick out her first pumpkin, since the first time she said, “Boo!”

Even in kindergarten my daughter spent a lot of time planning her costumes. (Yes, costumes. Some years she’s had more than one.) She’s been a bunny, a fairy, a witch, a ghost with her dad as a spooky vampire sidekick, and a Goth girl which gave the vampire cloak a second life. One year she was a mummy, which involved strips torn from a double bed sheet and me following her around all night with a handful of safety pins.

There are ridiculously realistic bats on my living room ceiling at the moment, and a six-foot skeleton in the front window that glows green in the dark. There’s a tombstone in the bathroom, skull lights around the kitchen door, and not one but two pumpkins, and the pièce de resistance, ghoul girl in the living room. (You can see I’m still working on getting the knees right.)

And there are three little Snickers bars in the freezer with my name on them. Literally. Because between you and me, that’s still the part of Halloween I like the best! 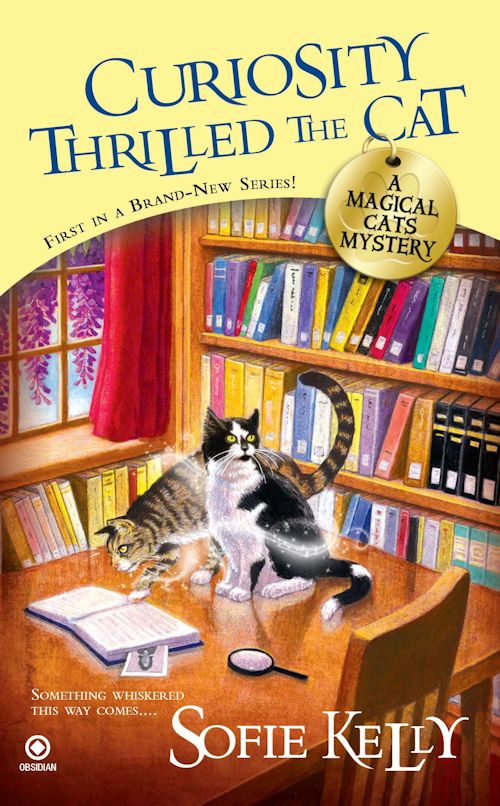 When librarian Kathleen Paulson moved to Mayville Heights, Minnesota, she had no idea that two strays would nuzzle their way into her life. Owen is a tabby with a catnip addiction and Hercules is a stocky tuxedo cat who shares Kathleen's fondness for Barry Manilow. But beyond all the fur and purrs, there's something more to these felines.

When murder interrupts Mayville's Music Festival, Kathleen finds herself the prime suspect. More stunning is her realization that Owen and Hercules are magical-and she's relying on their skills to solve a purr-fect murder. 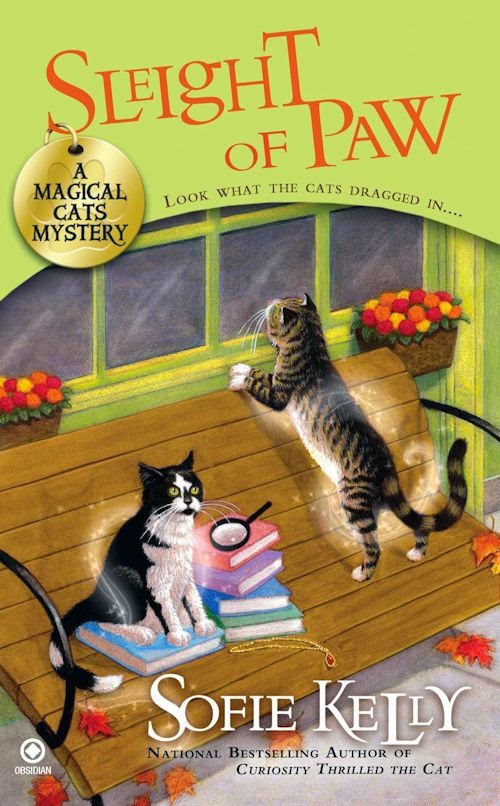 Small-town librarian Kathleen Paulson never wanted to be the crazy cat lady. But after Owen and Hercules followed her home, she realized her mind wasn't playing tricks on her-her cats have magical abilities.

When the body of elderly do-gooder Agatha Shepherd is found near Kath's favorite local café, she knows Owen's talent for turning invisible and Hercules's ability to walk through walls will give the felines access to clues Kath couldn't get without arousing suspicion. Someone is hiding some dark secrets-and it will take a bit of furtive investigating to catch the cold-hearted killer. 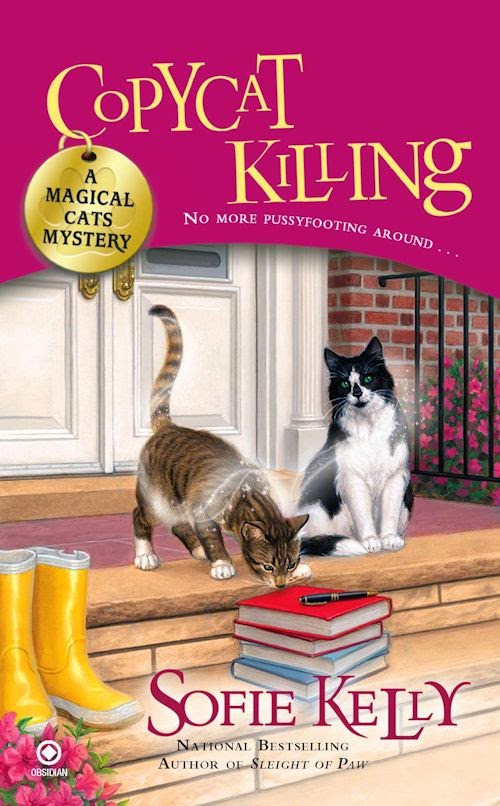 It's been raining cats and dogs in Mayville Heights. The small town's been deluged, and now the local artists' co-op is on the verge of flooding. Kathleen has been up all night helping her friends move their creations to the safety of the upstairs studio.

The artwork survives, but when controversial mask maker Jaeger Merrill is found drowned in the co-op basement, Kathleen questions whether the death was accidental. After she discovers the artist was using an assumed name, she realizes she can't actually assume anything about him. With the help of handsome detective Marcus Gordon—and her cats' extraordinary powers of detection—it's up to Kathleen to unmask a killer. 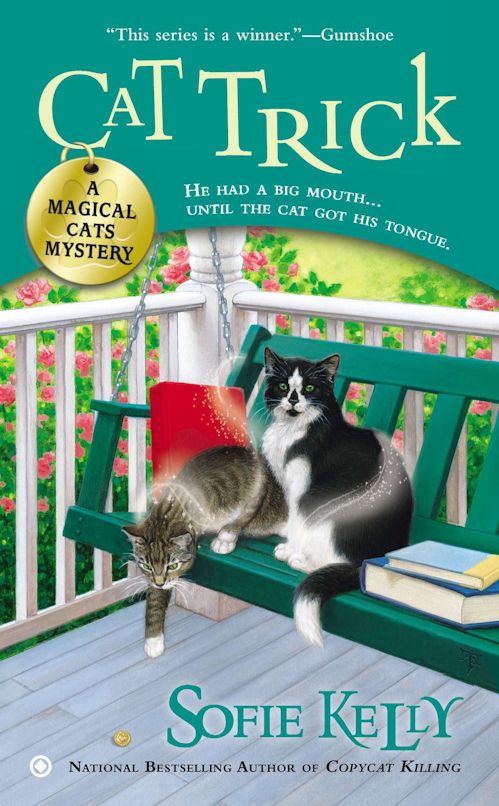 Kathleen Paulson enjoys her life as a small-town librarian with two extraordinary cats, Owen and Hercules, who provide companionship during the quiet times and have a remarkable talent for sleuthing when murder disturbs the peace....

The local businesses of Mayville Heights hope to convince Chicago-based company Legacy Tours to sell a vacation package for their town. Legacy Tours partner Mike Glazer grew up in Mayville Heights, but he’s no longer the small-town boy people once knew. Even the local bootlegger has an issue with the bossy loudmouth Mike has become—until someone shuts him up for good.

When Kathleen discovers Mike’s body on the boardwalk, she can’t help but get involved in the investigation—even if her beau, Detective Marcus Gordon, would rather she didn’t. Now, with a little help from Owen and Hercules, it’s up to Kathleen to make sure the killer is booked for an extended stay in prison before someone else takes a permanent vacation. 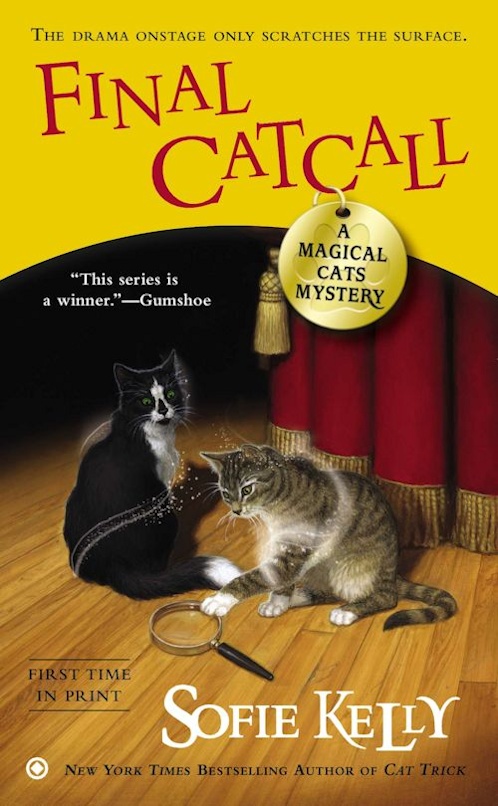 Small-town librarian Kathleen Paulson gets plenty of entertainment from her extraordinary cats, Owen and Hercules. But when a theatre troupe stumbles into more tragedy than it bargained for, it’s up to Kathleen to play detective....

With her sort-of boyfriend Marcus calling it quits and her ex-boyfriend Andrew showing up out of the blue, Kathleen has more than enough drama to deal with—and that’s before a local theatre festival relocates to Mayville Heights. Now the town is buzzing with theatre folk, and many of them have their own private dramas with the director, Hugh Davis.

When Davis is found shot to death by the marina, he leaves behind evidence of blackmail and fraud, as well as an ensemble of suspects. Now Kathleen, with a little help from her feline friends Owen and Hercules, will have to catch the real killer before another victim takes a final curtain call. 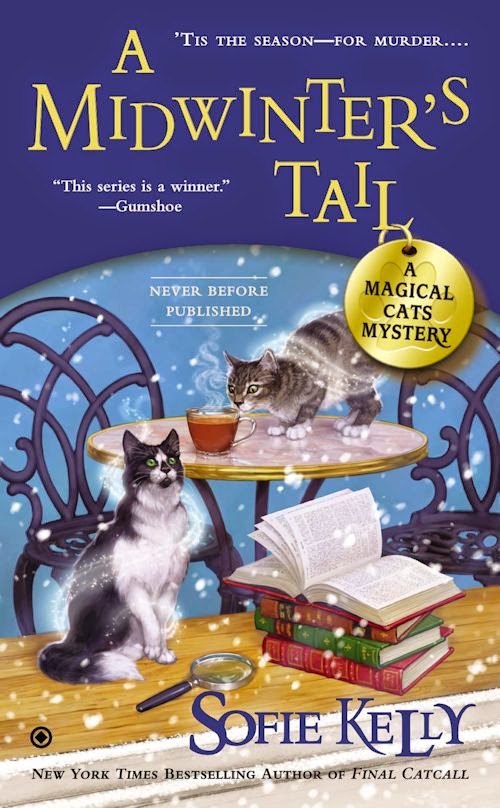 Kathleen Paulson is snowed under running her library and caring for her extraordinary felines, Owen and Hercules. But when a fund-raiser turns deadly, she’ll have to add sleuthing to her already full schedule....

Winter in Mayville Heights is busy and not just because of the holidays. Kathleen is hard at work organizing a benefit to raise money for the library’s popular Reading Buddies program. She has her hands full hosting the event. And when a guest at the gala drops dead, her magical cats, Owen and Hercules, will have their paws full helping her solve a murder.

The victim is the ex of town rascal Burtis Chapman, but she hasn’t lived in the area in years. And though everybody is denying knowledge of why she was back in town, as Kathleen and her detective boyfriend, Marcus, begin nosing around, they discover more people are connected to the deceased than claimed to be. Now Marcus, Kathleen, and her uncanny cats have to unravel this midwinter tale before the case gets cold. 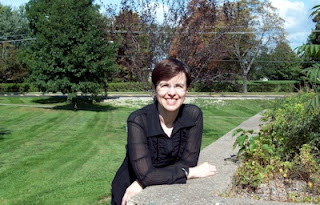 Sofie Kelly is an author and mixed-media artist who lives on the east coast with her husband and daughter. In her spare time she practices Wu style tai chi and likes to prowl around thrift stores. As Sofie Ryan she writes the Second Chance Cat Mysteries.

What:  One entrant will win a Mass Market Paperback copy of A Midwinter's Tail (A Magical Cat Mystery 6) by Sofie Kelly.

Who and When: The contest is open to all humans on the planet earth with a mailing address. Contest ends at 11:59 PM US Eastern Time on November 7, 2014. Void where prohibited by law. No purchase necessary. You must be 18 years old or older to enter.