Please welcome M. L. Brennan to The Qwillery. Iron Night, the second novel in the Generation V series, was published on January 7, 2014. 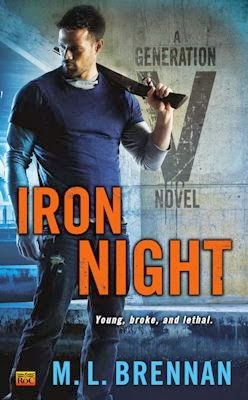 TQ:  Welcome back to The Qwillery. Iron Night, the 2nd novel in your Generation V series, was published on January 7, 2014. What is the most challenging thing for you about writing? Has this changed from when you wrote Book 1 to Book 2?

M. L.: It’s wonderful to be back, and thanks for having me!

I think what challenges me most about writing is the pre-writing portion. Once I’m actually banging away at a book, I’m pretty much committed right until the end. But it’s during that run-up period, where I’m coming up with ideas, mapping things out, and just getting together the motivation and commitment to start the book that I find really challenging. It hasn’t really changed, either – when I hadn’t ever written a book, there was the fear that I wouldn’t be able to achieve the goal. Now that I know that I can, there isn’t that fear, but there is a very real respect of just how big and absorbing the project is. When I’m in the middle of writing a book, I don’t have much energy to spare, so everything that isn’t crucially important basically gets neglected for three to five months. It’s very daunting, and I’m not sure it will ever seem easier to commit to it.

TQ:  What so you wish you'd known about publishing when Generation V (Book 1) came out that you know now?

M. L.: How incredibly important bloggers and reviewers are to getting a book noticed. I think when Generation V was published I had really still had that rather antique notion that I would just hand the book off and then it would either succeed or fail on its own merits, and the best I could do would be to just retreat into my nice and warm little writer’s warren and work on the next one. It turned out that I was completely wrong on that one – in today’s publishing world, the writer needs to be incredibly involved, and so much of how a book can get noticed comes from bloggers and reviewers.

TQ:  Tell us something about Iron Night that is not in the book description.

M. L.: After you read this book, you will never view elves the same way again. I promise.

TQ:  In the series so far who is your favorite good guy, bad guy or ethically ambiguous character?

M. L.: Oh, I like those options. I’m going with ethically ambiguous – and that would have to be Prudence, Fort’s older and far more sociopathic sister. She’s a lot more prominent in this book than she was in Generation V, and I was able to explore a lot more about her. She’s such a complex character, with so many facets – some admirable, some terrifying. I loved getting to bring her more into the center stage.

TQ:  Which character has surprised you the most?

M. L.: Definitely Fort. As my main character and the narrator of the book, I needed him to be able to carry the series, but I feel like he was really able to grow in Iron Night, and I love that he both was able to handle the gritty realities of his world better but at the same time hold onto the idealism and strong values that made him turn away from his family and their world in the beginning of the series.

TQ:  Give us one of your favorite lines from Iron Night.

M. L.: Naturally, it’s a Suzume line, spoken to Fort. “With how you were reacting to that glamour, I’ll have to keep an eye on you. Otherwise the next time I see you, you’ll probably have a Doctor Who tramp stamp.”

I love the mixture of protectiveness and snark she brings, all wrapped together with a verbal ass-slap against Fort’s masculinity. It feels a little like bragging on myself to say, but I liked a lot of lines in this book – and almost all of my favorites come from Suze.

M. L.: The third Fortitude Scott book, TAINTED BLOOD, will be out in November 2014, and right now I’m finishing the copy edits on it. So there will be plenty more Fort and Suze for those who enjoy Iron Night!

M. L.: Thanks so much for the opportunity, and I can’t wait to talk to you again when #3 comes out! 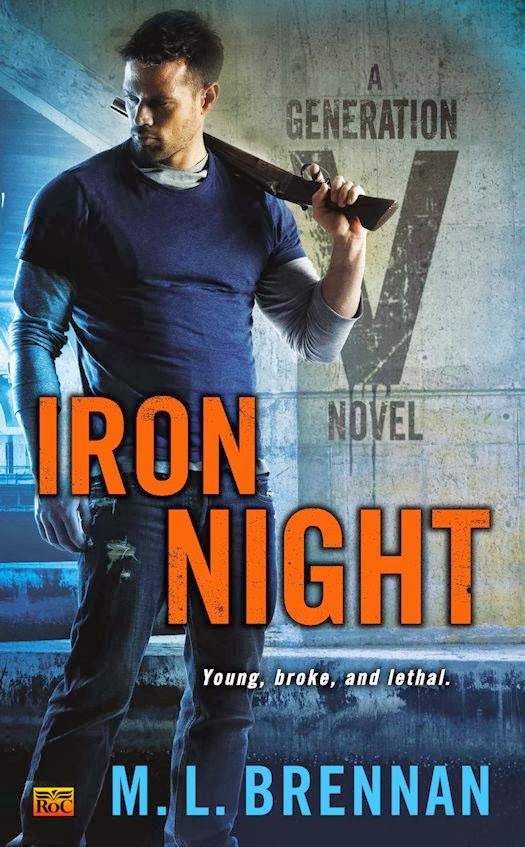 Underemployed by day. Undead by night.

Underachieving film theory graduate and vampire Fortitude Scott may be waiting tables at a snooty restaurant run by a tyrannical chef who hates him, but the other parts of his life finally seem to be stabilizing. He's learning how to rule the Scott family territory, hanging out more with his shapeshifting friend Suzume Hollis, and has actually found a decent roommate for once.

Until he finds his roommate’s dead body.

The Scott family cover-up machine swings into gear, but Fort is the only person trying to figure out who (or what) actually killed his friend. His hunt for a murderer leads to a creature that scares even his sociopathic family, and puts them all in deadly peril.

Keeping secrets, killing monsters, and still having to make it to work on time? Sometimes being a vampire really sucks.

Iron Night is the second novel in the Generation V / Fortitude Scott series by M. L. Brennan. In the first novel, Generation V, we were introduced to Fortitude Scott, a vampire who had not yet begun to transition from human to vampire, who is trying to avoid being a vampire, is a slacker and initially not a character that I really liked. I did like him very much by the end of the first novel. In Iron Night, Fortitude (Fort) is back along with his mom, siblings Prudence and Chivalry, and Suzume (a shapeshifter). Since the end of the first novel, Fort has been training with his brother and learning the family business from him not only because he's started his vampiric transformation, but because he is tired of being beat up and has family responsibilities that he is beginning to accept. Fort is not your average vampire and M. L. Brennan's vampire mythology is just as fantastic and different as Fort is.

Iron Night is as much about Fort slowing growing into his vampire side and becoming a better person as it is a story about a mystery set off by the gruesome death of Fort's roommate - a roommate that Fort got along with, liked and who actually paid the rent on time.  Fort lives in a low rent area of town, works as a waiter and drives a wreck of a Fiesta. Yes, his family has incredible wealth, but Fort is trying to hang on to his human side. This is one of Fort's charms: despite being in the beginnings of his transition to full vampire he still embraces his human side and while accepting what his family is does not fully give in to them. He does however start to understand that his vampire side gives him certain physical advantages (while scaring him at the same time). Fort is also awkward with women which is incredibly charming. His internal narrative about this is particularly amusing. He's not your usual vampire!

Fort is not the only wonderful character in the series. We get to see a lot more of Prudence in Iron Night. Prudence is the oldest of the Scott siblings, is fully vampiric and is a more or less a sociopath. She's also a terrifically written character who is very, very scary especially when she is being nice. Fort's brother Chivalry is also superbly done. He's somewhat nicer than Prudence but also has no qualms about being a vampire. Both siblings care about Fort in their own unique ways. Madeline Scott (their Mom) is back as well. She's the head of the family and in control of a vast territory. Things supernatural ultimately answer to her. She is very, very frightening.

One of my favorite characters is Suzume. She is a kistune or wolf shifter. She is funny, smart, snarky, and a great person to have at your back both in a fight and just generally. She was a great help to Fort in the first novel and continues to help Fort in Iron Night.

Both novels in the Generation V series present mysteries. In Iron Night, the mystery centers around who killed Fort's roommate and why. Brennan takes mythology, makes it her own and creates a great mystery with some very interesting underpinnings. This mystery kept me guessing.

There is humor, some gore, and action. Iron Night is beautifully written, is deeply engaging and features wonderful world building and exceptional characters. This is an Urban Fantasy series that you absolutely must read and should be on your auto-buy list.

Previously in the Generation V series: 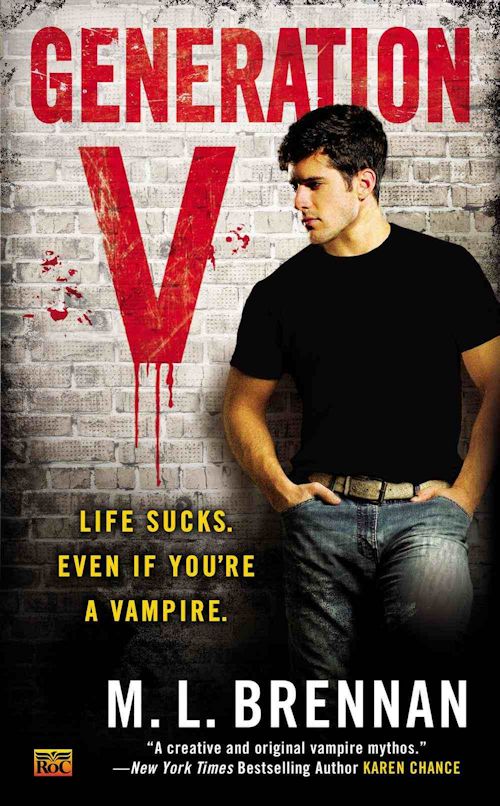 Fortitude Scott’s life is a mess. A degree in film theory has left him with zero marketable skills, his job revolves around pouring coffee, his roommate hasn’t paid rent in four months, and he’s also a vampire. Well, sort of. He’s still mostly human.

But when a new vampire comes into his family’s territory and young girls start going missing, Fort can’t ignore his heritage anymore. His mother and his older, stronger siblings think he’s crazy for wanting to get involved. So it’s up to Fort to take action, with the assistance of Suzume Hollis, a dangerous and sexy shape-shifter. Fort is determined to find a way to outsmart the deadly vamp, even if he isn’t quite sure how.

But without having matured into full vampirehood and with Suzume ready to split if things get too risky, Fort’s rescue mission might just kill him.…

M. L. Brennan lives in Connecticut with her husband and three cats. Holding a master’s degree in fiction, she teaches basic composition to college students. After spending years writing and publishing short work in other genres, Brennan decided to branch out and write the kind of book that she loved to read, resulting in Generation V, her first full-length work of urban fantasy.

What:  One entrant will win Mass Market Paperback copies of Generation V and Iron Night from The Qwillery.

Who and When:  The contest is open to all humans on the planet earth with a mailing address. Contest ends at 11:59PM US Eastern Time on January 26, 2014. Void where prohibited by law. No purchase necessary. You must be 18 years old or older to enter.