Please welcome Mercedes M. Yardley to The Qwillery. Nameless: The Darkness Comes (The Bone Angel Trilogy 1) was published on January 16, 2014. 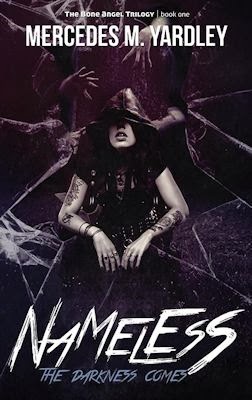 Writing Through Adversity. Or Not.
By Mercedes M. Yardley

I wrote as a kid. I wrote as a teen and in college. Then I stopped to be An Adult, but this didn’t work for me. It made me miserable. It murdered my soul.

Then I was a young, married woman with a sweet, tiny son. I start writing again, and it was hard. I was rusty. I was afraid and not technology savvy and I had no idea what to do with “the business aspect” of writing. But I tried not to care about that. I wrote and wrote and wrote, building novels and short stories the way that somebody learns to walk again: one step at a time.

How To Write Anything: Take a word. Add another word. Hook on a third word. Crochet with syllables. Build a scaffolding with adjectives. Write music with phrases, with exclamation marks, with descriptions of the character’s day. Of their weeks, of their problems, of their thoughts.

I was writing a novel titled Nameless: The Darkness Comes. It was a thing of joy. I was writing so quickly, so easily! I was banging out a chapter a night, giggling with Luna, mooning over Reed Taylor. This was what writing was supposed to be.

It was devastating. But I couldn’t waste time worrying, because I had two other children to worry about. So I needed to cope. And how does a writer cope?

So I pushed through. I gave Reed Taylor size 13 steel-toed boots. I let their world take me away from my own concerns. I wasn’t worried about babies or choosing caskets or invasive medical procedures. Instead, I chose to worry about Luna’s demons and Mouth’s real intentions and Reed Taylor’s decisions. And this saved me.

There came a time when I was forced on bed rest. For months. I couldn’t sit up. I couldn’t hold a computer on my now-nonexistent lap. Writing wasn’t the option that it had been before.

Then there were babies and blessings and funerals and one strong, healthy, premature little girl. I visited her every day in NICU for two months until we brought her home. Then there was grieving and sleepless nights and adorable outfits and a child I refused to put down.

I couldn’t. I wouldn’t. I needed her close to my heart, all of the time.

I felt as though I should get back to writing Nameless. It was a weight upon me. My agent was waiting for it. It would heal my soul, and I had obligations. I was a writer, and writers write all of the time. Even when it’s hard. Even through adversity.

This is true. I’ve written through adversity before. When time was short and kiddos were sick and it was 117 degrees outside. I’ve written even when I was depressed, when I didn’t feel like it, and when it was hard to get to a computer. I wrote in foreign countries. I wrote in the dead of night when I couldn’t sleep. I wrote when I didn’t wanna. I wrote and wrote and wrote. Again, step by step. Build. Create. Do. Become. BE.

Be a writer. Be an author. Be a person who doesn’t quit.

Except that sometimes you need to. Sometimes pushing through it hinders more than it helps. It hurts. Wounds. It makes things worse.

Life will throw you curves. Some of them will knock your down, but you’ll get up and dust yourself off. Some of them will knock you out, and no matter how you try, you won’t be able to pull it together right away. You’ll lie there for a while, and then maybe manage to make it to your hands and knees. Then perhaps you’ll sit up. You’ll be dizzy, so you’ll be still for a while. I hope that somebody will reach out a hand and help you to your feet. You’ll practice standing. You’ll feel the firmness of the ground underneath you. You’ll blink in the sunshine. And eventually you’ll look around, and life will be beautiful again.

You don’t need to work through adversity, not all of the time. If you can’t write, then treat yourself with grace. Treat yourself as kindly as you’d treat anybody else that you love fiercely. You wouldn’t scream at them to work while they’re lying unconscious at your feet. Why would you do that to yourself?

Don’t. Because your world may possibly stop for you one day. Perhaps it already has. Perhaps that’s happening right this moment.

You know what? It’ll start back up again. I promise.

My story? It’s one of success, at least to me. The last triplet is two years old, and spunky. It’s a house of love. Nameless wasn’t finished by the original planned date, but when I got back to it, I felt free again. No stress. No pressure. I wrote about motorcycles and lost little girls and demons, while facing some of my own. It was fun. It’s now my debut novel, the first book in a trilogy, and more than anything, it makes me smile.

It’s a Book of Happy. It’s a book of joy. It’s proof that writer’s write, but sometimes they take breaks. And then they write again. 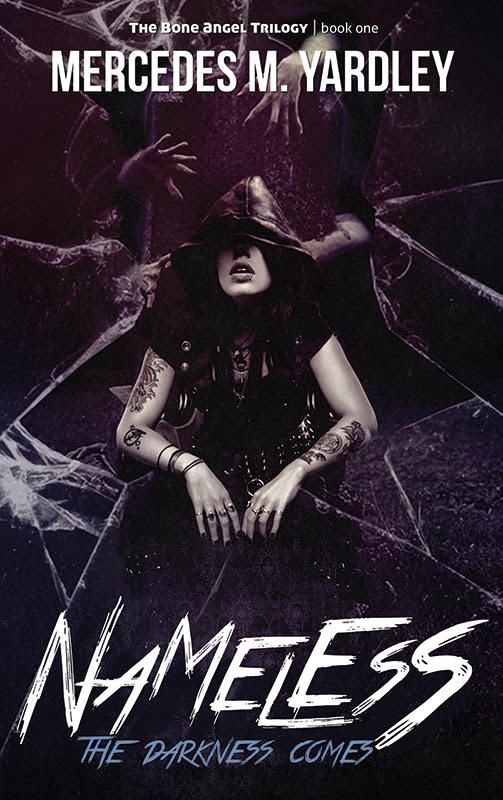 Luna Masterson sees demons. She has been dealing with the demonic all her life, so when her brother gets tangled up with a demon named Sparkles, ‘Luna the Lunatic’ rolls in on her motorcycle to save the day.

Armed with the ability to harm demons, her scathing sarcasm, and a hefty chip on her shoulder, Luna gathers the most unusual of allies, teaming up with a green-eyed heroin addict and a snarky demon ‘of some import.’

After all, outcasts of a feather should stick together...even until the end. 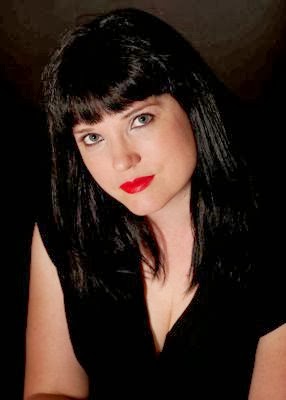