Interview with Emma Cornwall, Review of Incarnation and Giveaway

Please welcome Emma Cornwall to The Qwillery! Emma is the author of Incarnation, which was published on September 18th. 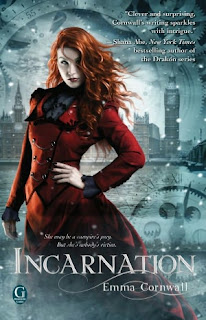 TQ:  Incarnation is about Lucy Weston from Bram Stoker's Dracula as well as Bram himself. Why do you think Dracula has endured as the basis for further novels?

Emma:  When he created “Dracula”, Stoker tapped into the primal fears and desires of his time,  everything from suspicions of exotic foreigners to hang-ups about the sensuality of women.  In doing so, he created a template that authors and screen writers have been happily using ever since. “Twilight’s” Edward Cullen and “True Blood’s” Bill Compton are both about as far removed from the original Dracula as it’s possible to get yet they strike a powerful chord today because they appeal to the primal fears and desires of our own time.


TQ:  Why did you focus on Lucy Weston as your main character?

Emma:  I focused on Lucy because, with all respect to Mr. Stoker, I found her--in her original incarnation--to be boring, insipid, and annoying.  About the best that can be said about her is that she sheds light on Victorian/Edwardian attitudes toward women.  But she could have been so much more!  She undergoes an amazing transformation yet she’s treated as nothing more than a vehicle for the titillating horror of the men around her.  I believed that she deserved better.


TQ:  Incarnation's setting is classic steampunk - Victorian London. What drew you to steampunk and why do you think it's become so popular?

Emma:  Steampunk is popular because it’s cool, it rules! On a (slightly) more serious note, I think we enjoy it because it gives us a glimpse of a world that might have been if our technology had developed differently.   Looking at ourselves in a mirror that’s just a bit fractured seems to show us aspects of ourselves that we wouldn’t otherwise see.

Emma:  Lucy was the easiest by far.  Almost as soon as she crawled from her grave, she took over the story.  The hardest was Marco.  It took me a while to figure out who he really was and what he wanted.  He kept on surprising me right to the end.

TQ:  Without giving anything away, what is/are your favorite scene(s) in Incarnation?

Emma:  My favorite scene is when Lucy discovers the true nature of a vampire’s heart.

Emma:  I’d love to pursue Lucy adventures but that will depend on the reader response to this book.  If that’s strong enough, there will be more.  Meanwhile, I’m hard at work on another, unrelated project.

Emma:  Thank you for having me. 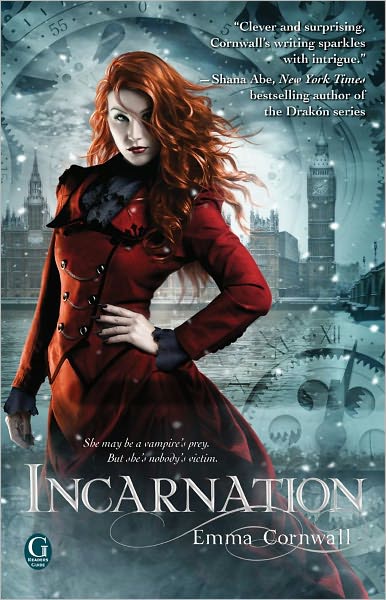 In the steampunk world of Victorian London, a beautiful vampire seeks out the author of Dracula–to set the record straight . . .

If one is to believe Bram Stoker’s legendary vampire tale, Lucy Weston is Dracula’s most wanton creation, a sexual creature of the night who preys on innocent boys. But the real-life Lucy is nothing like her fictional counterpart—and she demands to know why the Victorian author deliberately lied. With Stoker’s reluctant help, she’s determined to track down the very fiend who transformed her—from the sensual underworld where humans vie to become vampires, to a hidden cell beneath a temple to madness, and finally into the glittering Crystal Palace where death reigns supreme.

Haunted by fragmentary memories of her lost life and love, Lucy must battle her thirst for blood as she struggles to stop a catastrophic war that will doom vampires and humans alike. Ultimately, she must make a choice that illuminates for her—and for us—what it means to be human.

I’m a huge Dracula fan so had high expectations for Incarnation. The conceit of Incarnation is that Bram Stoker wrote Dracula to cover up what really happened to Lucy Weston. We really don’t know much about Lucy from Dracula. So… pretty much anything goes as to what Lucy is like, what her family is like, etc.

Like Lucy Westenra in Dracula, Lucy Weston in Incarnation has become a vampire. If you recall from Dracula, she is staked and put out of her supposed vampiric misery. In Incarnation, despite this, she rises compelled by an unknown and powerful being.

Lucy is a fascinating character. She’s left with shattered and piecemeal memories when she comes back from being staked. She does not know who she is or what happened to her. She is determined to find out. As the story progresses Lucy regains more and more of her memories. The breadth of Lucy’s knowledge of just about everything political, newsworthy and scientific stood out. She did spend several months reading books in a library reading which perhaps explains that. This is not the Lucy Westenra of Bram Stoker’s Dracula, which, of course, is the point. She carries on despite being unsure of herself, her nature, and the new supernatural world of which she is now a part.

While Incarnation is described as being set in the “steampunk world of Victorian London “, it’s very lightly glossed with that particular genre. This did not detract from the story. For me, had more time been spent on describing steampunk contraptions, the flow of the story would have been disrupted. I enjoyed how steampunk was lightly layered over Victorian London without overwhelming the story.

There are several wonderful non-historic characters in the story including a love interest (perhaps) for Lucy. In addition, there is more than one flavor of evil in Incarnation. The ‘bad guys’ had different motivations. This was very well done. I particularly enjoyed the intrigue and rich history behind what was happening that made it necessary for Bram Stoker to write Dracula and for Lucy to be turned. The use of fictional and non-fictional characters enriched the novel. The ‘Dracula’character of Incarnation was very well done. I won’t say more about this being because that would give too much away.

Bottom Line: Ms. Cornwall weaves political intrigue, history and the story of the ‘real’ Lucy Weston into an enjoyable novel. I hope that we see more of Miss Weston.

What:  One commenter will win a copy of Incarnation from Gallery Books. US ONLY


What is one of your favorite vampire novels?

Who and When:  The contest is open to all humans on the planet earth with a US mailing address. Contest ends at 11:59pm US Eastern Time on Saturday, September 29, 2012. Void where prohibited by law. No purchase necessary. You must be 18 years old or older to enter.


*Giveaway rules are subject to change.*
Posted by Qwill at 11:05 AM