Guest Blog by Max Gladstone - The Agony and Ecstasy of Send

Please welcome Max Gladstone to The Qwillery as part of the 2012 Debut Author Challenge Guest Blogs. Three Parts Dead will be published on October 2, 2012. 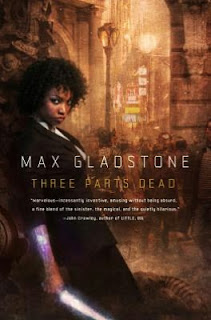 The Agony and Ecstasy of Send
Stop me if you've heard this one before: Our Hero wakes up in a white room—maybe a room in only the loosest sense, a featureless white expanse without floor, ceiling, or walls, or else an According-to-Hoyle room, complete with white bed, white tables, white chairs, white curtains. Perhaps Our Hero is confined to a hospital against her will. Maybe she's stuck in an insane asylum, or an extra-dimensional prison. Specifics come later. The room is the point, and the room is white.

The joke, of course, is that Our Hero is in exactly the same position as her author: staring at a featureless white space, defined at best by faint suggestions of detail. The empty page that confronts the author becomes the space the character must navigate.

I first read this joke years ago, in the Turkey City Lexicon; Bruce Sterling summed it up by wondering what would become of the venerable white room now that a writer starting a story is more likely to stare at a monitor than a sheet of blank paper.

The white room is alive and well, and will remain so until Skynet wakes up and word processor programs open with a pre-written page. But the white room has a new friend, a comrade in arms: the Terrifying Button.

You know the Terrifying Button. It's the button at the end of Mission Impossible: Ghost Protocol, the one Tom Cruise pounds to stop the world from ending. It's the button the hero presses to stop the bomb, or blow the bridge. Jeff Goldblum's magic PowerBook in Independence Day is one of the great Terrifying Buttons of cinema. The entire last act of Joss Whedon's Serenity is one big quest for the Terrifying Button. Bonus points if, after pushing the Button (with their last ounce of strength), our heroes, and even sometimes the villains, stand back, hold their breath, and wait, and hope.

To qualify, the Button must be the pivotal moment of the plot: if the Button works, the heroes win, and if it fails, they lose. There's a Button in Alien—the self-destruct sequence—but it's not Terrifying. Pressing that Button doesn't save the world; it's one more failed attempt by the Nostromo's crew to stop their adversary. For a Button to be truly Terrifying, its activation must contain the possibility of success or failure.

I'm no social scientist or computational literary scholar; I've conducted no extensive surveys or interviews. But it seems to me that the Terrifying Button springs from the same font as the Mysterious White Room. The writer escorts her characters through adventure, heartbreak, mystery, pain, redemption, despair, and all the other million ills flesh and fiction are heir to, and at the end, everything—lives, futures, destinies, love—depends on the press of a button. And that button has the word 'send' in the middle. Off goes the manuscript, leaving the writer to pour herself a couple fingers of scotch and pace her room and watch her inbox and wonder: was the subject line eye-catching enough? Did I remember to fix that typo my friend caught on page 274? (Yes, I did.) Did the attachment attach? Does the (choose one or more: agent/editor/assistant/publicist/reviewer/gatekeeper)'s email strip attachments? What if they decided, in the 12 hours since I last checked submission guidelines, that Courier is an affront to typefaces everywhere and they now only accept manuscripts in Zapf Dingbats or ten-foot-high Braille? And, of course, the big one: what if everyone I know has been lying to me this entire time, and my book, my screenplay, my story, my memoir, isn't any good? Or, every bit as insidious: what if it is? What then?

That's the Terrifying Button: 'send' itself, and the heady mix of anticipation and fear it entails. If you live on the internet, you've encountered the Terrifying Button, when sending a love letter or sales email, a job or college application, a final paper or an OK Cupid message. Pressing the button is a mystical moment. By pressing it, you will discover something about yourself, and your work.

Which is why, I think, Terrifying Button moments can be so effective, even though they're patently ridiculous as story devices. Think about it: pressing the Button takes success or failure completely out of the hands of our main characters, and puts it in the hands of some anonymous IT department. The question of whether the Button works is outside the bounds of the story, unless the story has been about corporate IT at some nameless internet service provider and Tom Cruise was a last-minute arrival on the scenes.

But that's the point. The story is told, the writer presses the Button, off the story goes, and soon the writer learns whether the story works the way she hoped. The Button is the fundamental truth of storytelling: in the end, you let your story go, and see what the audience does with it.

Some Buttons make you wait longer than others. I pushed the Button for my debut novel Three Parts Dead about six months back—the biggest Button of my career so far, a Button that's the sum of either a few years or a lifetime of effort depending on how you look at it. On October 2, the book hits shelves, and over the next few weeks I learn the results of the fateful press. Forces are working behind the scenes, beneath the surface, and while I have the tiniest shred of influence over what happens next, for the most part it's out of my hands. The book belongs to the audience now. The button is pressed, and time will tell what happens next. All I can do is wait, and hope.

And take heart in the fact that I'm not alone. These days, we all live in the world of the Button. 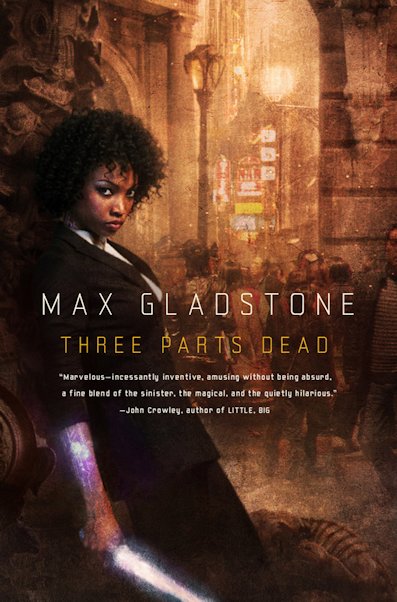 A god has died, and it’s up to Tara, first-year associate in the international necromantic firm of Kelethres, Albrecht, and Ao, to bring Him back to life before His city falls apart.

Her client is Kos, recently deceased fire god of the city of Alt Coulumb. Without Him, the metropolis’s steam generators will shut down, its trains will cease running, and its four million citizens will riot.

Tara’s job: resurrect Kos before chaos sets in. Her only help: Abelard, a chain-smoking priest of the dead god, who’s having an understandable crisis of faith.

When Tara and Abelard discover that Kos was murdered, they have to make a case in Alt Coulumb’s courts—and their quest for the truth endangers their partnership, their lives, and Alt Coulumb’s slim hope of survival.

Set in a phenomenally built world in which justice is a collective force bestowed on a few, craftsmen fly on lightning bolts, and gargoyles can rule cities, Three Parts Dead introduces readers to an ethical landscape in which the line between right and wrong blurs.

Max’s novel Three Parts Dead will be published by Tor Books in October.

Max has taught in southern Anhui, wrecked a bicycle in Angkor Wat, and been thrown from a horse in Mongolia. Max graduated from Yale University, where he studied Chinese.