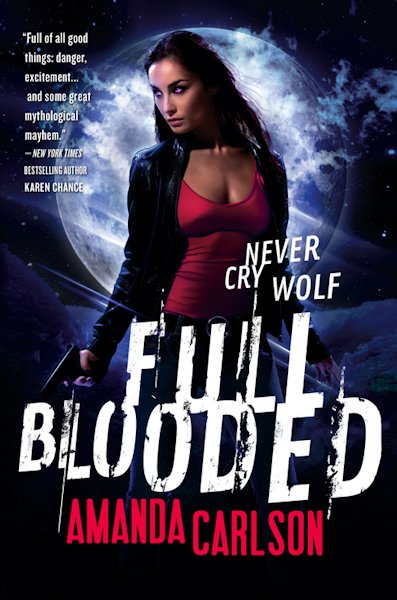 Full Blooded is the first novel in the Jessica McClain series. It was preceded by Blooded, an eNovella, that was published in April.

Jessica is the only female born into an all male race. This leads to problems based on superstitions held by some of the werewolves. Being human and female has not been easy. In the novella, Blooded, we get a glimpse of the difficult life that Jessica has been leading and she finally gets to leave and live away from her father's Pack. Full Blooded picks up her story several years later.

So what did I like about Full Blooded, Amanda Carlson's debut novel? Everything!

I love Jessica McClain. She is terrific. She's trying to live her own life, under the radar. Then she becomes the only female werewolf in the world. To say that things get very intense for her and those around her would be an amazing understatement. She's tough, smart and not perfect. Being a human for so long makes her different. Having grown up with the Pack but not part of the Pack she has some idea what to expect as a werewolf. But being is different than watching. She has a lot to learn. This becomes complicated by events rapidly unfolding because she's become a werewolf.

The supporting cast is very well done. The distinct personalities of her brother, father and others in the Pack are well developed. In Full Blooded we meet more of the not so good guys. They are suitably creepy and I enjoyed disliking them very much.

Is there romance in Full Blooded? Sort of. I can say the Jessica has some fine men to choose from! You'll have to read the novel to find out.

Full Blooded is fast-paced and action-packed with world building that flows organically with the story. At no time did I find the story bogged down with information - mythological or otherwise. At no time did I feel lost. Full Blooded ends with several unresolved issues that I'm really looking forward to reading more about in Hot Blooded (April 2013).

Bottom Line:  Full Blooded is a terrifically written thrill ride that I did not want to get off. Jessica McClain has become one of my favorite Urban Fantasy heroines. I'm hooked.

I give Full Blooded 5 Qwills.

Read my review of Blooded here.

Read my interview with Amanda Carlson here.
Posted by Qwill at 8:30 AM