Please welcome Claire Ashgrove to The Qwillery. Bound by Decency, the first novel in Claire's The Flying Gang Legacy series, was published on August 1. 2012. 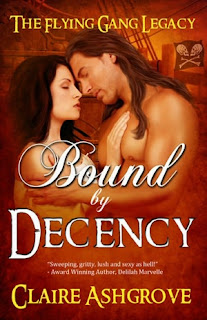 Claire:  Thanks for having me here today -- The Qwillery is in the top three of my favorite blog sites ever. I always love being here!


TQ:  Tell us a bit about your new Flying Gang Legacy series.

Claire:  The Flying Gang Legacy is a pirate quartet, set in the early 1700s, during the time the Caribbean waters teemed with pirates. It's adventurous, sexy, and fun! Oh, and there's treasure too! Over the course of the four books, you'll meet the noble pirate Cain, the devilish Drake, the terrifying Nightshade, and the roguish Royce -- all of whom have special places in my heart and were immensely fun to craft.

Let me share the premise with you real quick:

With Europe in chaos over who would claim the Spanish throne, the Atlantic waters bred a most despicable lot. Privateers who pillaged and claimed, loyal to no country, more thief than noble mercenary. One man would claim Spain’s inheritance. He would pass it on. To a band of cutthroats more terrifying and deadly than the nightmares of the deep.

As the nations settle into peace, The Flying Gang knows no boundaries. No sea is safe. No shore unchartered. Chilling Rogers raised to the sky, they reign with fear, bound only to the wind, the brotherhood, and the ships they love. One tiny jeweled box strikes a gleam in their eyes. A golden trinket four rogue Captains risk danger, capture, and even friendship to possess.
Until love interferes with their rapscallion hearts…

TQ:  What inspired you to write the The Flying Gang Legacy series?

Claire:  Inspiration? Gosh... I can't say there was any one thing. I've always been fascinated with the pirate life, and frankly, I ran out of sexy pirate reads. The characters popped into my mind, and I was off and running.


TQ:  What sort of research have you done for the series? What is the oddest bit of information that you've come across.

Claire:  I did a lot of maritime research, most particularly on ships. During this blog tour I've talked about the realities of pirates versus our Hollywood ideals, and those aspects have been particularly fun to investigate. Another thing that I found absolutely fascinating was the food and drink that sailors, and specifically pirates in my oceans, consumed. Doing research on Nassau was a blast as well! It's such a colorful place -- and the iguanas are fascinating.


TQ:  Describe Bound by Decency (The Flying Gang Legacy 1) in 140 characters or less.


TQ:  In Bound by Decency who was the easiest character to write and why? Hardest and why?

Claire:  Drake. Laugh. He was the easiest. The man just always had something to say. And harassing Cain was always on the top of his list. India was a bit more challenging. Portraying her with just enough forward-thinking to make her character plausible, but holding her back from becoming too ahead of her times. And balancing her imagination with the reality, was a little difficult at times as well.


TQ:  Without giving anything away, what is/are your favorite scene(s) in Bound by Decency?

Claire:  My favorite scene? After Nightshade makes an appearance, India and Cain have an argument. It's the first time he really lets down the walls around his emotions, and I got a little misty-eyed writing it.

Claire:  Gosh what's next -- I'm loaded down with a lot of things through the end of the year.

Inherited Damnation continues with an October release. I just put out another self-published romantic suspense, The Heart's Stronghold (It's only 2.99 go grab it! :) ), and as Tori St. Claire, the Black Opals are making a return.

But more exciting than I think anything, is my upcoming September release, Immortal Surrender, the continuation of The Curse of the Templars. Farran's story is such an emotional journey, and I love that tortured knight. I can't wait for all of you to have a chance to get to know him. And Noelle? She's so inspiringly innocent--I'd truly like to be that woman.

Claire:  Thank you, very much for letting me stop in!

About Bound by Decency 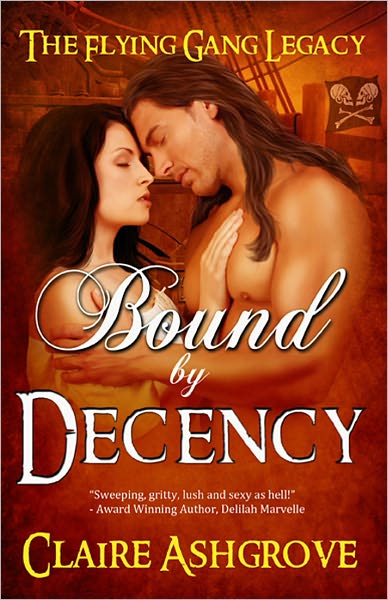 After inheriting a portion of Spain’s Royal Inheritance, Cain left The Flying Gang for a chance at honest wealth. With the secrets of his piracy tucked away, he achieved his lofty aspirations. But when his partner and best friend betrays him to the Royal Navy, Cain’s dreams are ripped to shreds. He’s left with his ship, the tattered remnants of a stolen future, and a piece of Spanish mystery. Wanted by three nations and destined for the gallows, he returns to the legendary band of buccaneers for one purpose -- vengeance.

Kidnapped by the formidable Cain, India Prescott discovers he intends to kill the man she’s to marry. Cain’s story reveals betrayal. Treachery that extends to her as well. Although she holds the key to retribution, India refuses to become another man’s pawn. Freedom lies before her, the liberty to shrug off propriety, make her own decisions, and claim her destiny. But when she uncovers goodness in Cain’s soul and he awakens passion in her heart, she must combat the chains of convention once more.

Only this time India's not fighting society. She’s battling a pirate bent on keeping her decency intact.

India refused to be swayed. She’d found freedom. She wasn’t about to let it slip through her hands because of a little danger. Life was meant to be lived, not treated like a sickly child. “Then come with me. You’ll keep me safe. Teach me how to defend myself, if you must. But I’m going down there, with or without you.”
Cain opened his mouth to speak, spluttered something unintelligible, then quickly snapped it shut. Clearly, he had expected her to listen to reason and take refuge from the scourge within a taxi. As he struggled to recover his tongue, she fought back a giggle. She’d won. She had actually won a round with Cain.
“Absolutely not.”
Or perhaps she’d lost. Dismay settled into her veins, weighing down her heart. She pulled her hand free of his arm and turned to gaze at the shore in longing. They didn’t fear a stroll down the streets. What made those women so different than she? The fact they couldn’t size their clothes correctly, or that they opened their legs for coin?
She stiffened her chin, stalked to the rail, and swung a leg over to catch the ladder dangling off the bow. “This taxicab—where shall I find it?”
“I’ll hail one when we reach the end of the dock.”
“No. I’m afraid you don’t understand. I’m going to walk, Cain.” With that she disembarked.
In seconds, his feet appeared on the rope rungs above her head. He glanced over his shoulder, looking down at her. “What in the name of the seven hells do you think you’re doing?”
India shimmied down the last three rungs, and her toes touched the wet wooden dock. She dusted her hands on her trousers, then flashed him a broad grin. “Seeing the things I want to see.” Turning, she took four steps toward the fray of people.
He hit the dock with a thud. “India!”

Claire lives in Missouri with her two toddler sons, and too-many horses, cats, and dogs. In her “free” time, she enjoys cooking, winning at Rummy, studying Ancient Civilizations, and spending quiet moments with her family, including the critters. She credits her success to her family's constant support and endless patience.

To learn more about Claire, visit her on the web at www.claireashgrove.com, or www.toristclaire.com.

Claire will be giving away a $25.00 Amazon Gift Card to one random commenter during the tour. Follow the tour – the more times you comment, the better your chances of winning! Complete schedule can be found here. 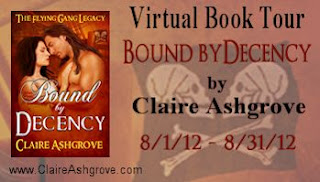 ** The Qwillery is not affiliated with Claires's virtual book tour giveaway and is providing this for informational purposes only. Please follow Claire's rules to enter to win the $25.00 Amazon Gift Card.
Posted by Qwill at 8:00 AM