10 Russian Traditions That Stole My Heart
If you’ve been following my blog tour, you know that I get a little crazy when it comes to research, and especially for my House of Arkhangel’sk series. In case you aren’t familiar with my Russian obsession, I knew very little about Russia until I got it into my head to write a fantasy version of Anastasia. My writing journey led me not only to take a class on Russian Culture at the local community college, but to begin teaching myself the language as I fell in love with it, and eventually to Russia itself.

There are a few things I discovered about Russian tradition both from living there for a month with a host family and from reading obsessively about it that I found particularly endearing. All of these ended up in my books.

10. Tea
The tradition of drinking tea seems to infuse every aspect of society. Dostoevsky couldn’t write without it, and now neither can I. (Though he had a real samovar to make his with, and for now, I have to stick with a tea kettle until I find the perfect samovar of my own.) When I was in Russia, we had tea with breakfast, a mid-morning break for tea and sweets, tea with lunch, a mid-afternoon break for tea, and tea before bed. Tea was always served with sugar, no cream, though the traditional method for sweetening is stirring some jam into it.

9. Tapochki
Russians do not believe in going barefoot or stocking-footed in the house. You will get sick. But you don’t wear outdoor shoes in the house either. That would be uncouth. Instead, every Russian household has a rack of tapochki inside the door, house shoes or slippers one puts on after removing one’s outdoor footwear. I brought my own fuzzy pink booty slippers to Russia, which amused my hostess, and I took to wearing them inside the house when I returned to the US, until a housekeeping accident (they were a bit worn by this point, and my cleaning lady thought they were rags) forced their retirement.

8. Blinchiki
These are little blini—essentially pancakes, except a bit smaller, less sweet, and fried in more oil. Served with jam and sour cream, they were my favorite breakfast accompaniment to tea. I think I drove my hostess crazy asking for them every day.

7. Kasha
Another breakfast staple I’ve been missing ever since, kasha is porridge, and while often made from buckwheat, it apparently isn’t always the same grain depending on where you get it. I’ve tried buying kasha here in the US and cannot duplicate the wonderful flavor and consistency of what my hostess served me. I think she was tired of making this, too, by the end of my visit. ;)

6. Russian Hospitality
No matter what they have, Russians will offer it to you gladly when you come for a visit—and many of them have little. I was treated to a trip to the imperial parks and palaces at Pushkin, also known as Tsarskoe Selo, by a relative of my American roommate, simply because she asked if I might come along. Neither of us expected for him to pay for our tickets, but he insisted, and then took us home to his family to serve us a wonderful chicken dinner and homemade cranberry vodka. It’s also a tradition to bring your host a gift when you visit, and I hadn’t realized we’d be going to his house for dinner, so to this day I regret not bringing something to show my gratitude for everything they gave me, a total stranger, simply because it’s what they do.

5. The White Nights
This is specific to St. Petersburg, where I stayed, and is of course a phenomenon of nature and not a tradition, per se, but during the summer months, the sun barely sets in northern Russia. What makes St. Petersburg unique is its celebration of this bounty of light. Ballet and opera and theatre abound, as well as cultural festivals like Alye Parusa, “Scarlet Sails,” which celebrates the city’s graduates with a giant party in the streets, live music, fireworks, and a scarlet-sailed frigate that sails up the brightly lit Neva river past the Winter Palace.

4. Dachas
Many Russians who live in the city, even those of limited means, have a summer house in the countryside where they retreat on the bright summer weekends. They can be as simple as a one-room cabin, or a two-story home with all the modern conveniences. During Soviet times, families were allotted small plots for these dachas so long as they used a specific percentage of it for growing food, so gardening is still a big part of going to the dacha.

3. Orthodox Churches
I’ve talked about my atheist love affair with the Russian Orthodox Church elsewhere, but it’s the buildings themselves that truly captured my heart. The walls and ceilings and the iconostases are painted with breathtaking icons, with the domes of the cupolas using iconography and light to suggest heaven itself. As a tourist, an atheist, and a feminist, I was nearly brought to tears by the experience of being welcomed inside some of these buildings—wearing the mandatory headscarf—to gawk at the simple, but awe-inspiring beauty.

2. Ivan Kupala and the Flower of the Fern
Shortly after the Summer Solstice, the pagan holiday of Ivan Kupala is still celebrated in many parts of Russia. The “Ivan” is for John the Baptist, whose feast the Orthodox Church decided to incorporate into it when they couldn’t stamp it out, while “Kupala” is the pagan god or holiday (there seems to be some debate on the origin of the name) involving water mischief, jumping over bonfires, and seeking the elusive flower of the fern that blooms only at midnight on the night before.

1. Vodka
See Russian Hospitality. My host in Pushkin was very pleased when I said yes to a second and third glass of the tasty beverage he was serving with dinner. My American roommate was surprised that I was drinking so much vodka. I was astonished that I didn’t even taste the vodka and thought it was just really good juice. (Clearly, my Russian language comprehension skills aren’t the greatest, either.)


About The House of Arkhangel'sk


[Cover to be revealed!]

Against the pristine ice of Heaven, spilled blood and a demon’s fire will spark celestial war.

The exiled heir to the throne of Heaven, Grand Duchess Anazakia and her demon companions, Belphagor and Vasily, have made a comfortable home in the Russian city of Arkhangel’sk, but their domestic bliss is short lived. When their daughter Ola is taken as a pawn in Heaven’s demon revolution, the delicate fabric of their unorthodox family is torn apart—threatening to separate Belphagor and Vasily for good.

Anazakia is prepared to move Heaven and Earth to get her daughter back from Queen Aeval, risen in Elysium from the ashes of temporary defeat. But Aeval isn’t the only one seeking Ola’s strange power.

To conquer the forces amassing against them, Anazakia is prophesied to spill the blood of one close to her heart, while Vasily’s fire will prove more potent than anyone suspected. In the battle for supremacy over Heaven’s empire, loyalties will be tested and secrets will be revealed, but love will reign supernal.

The Fallen Queen
The House of Arkhangel’sk 1
Entangled, May 15, 2012
Trade Paperback and eBook, 400 pages 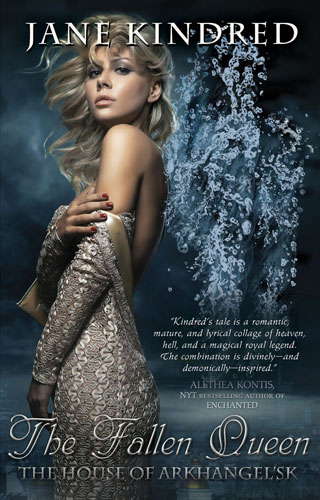 Heaven can go to hell.

Until her cousin slaughtered the supernal family, Anazakia’s father ruled the Heavens, governing noble Host and Fallen peasants alike. Now Anazakia is the last grand duchess of the House of Arkhangel’sk, and all she wants is to stay alive.

Hunted by Seraph assassins, Anazakia flees Heaven with two Fallen thieves—fire demon Vasily and air demon Belphagor, each with their own nefarious agenda—who hide her in the world of Man. The line between vice and virtue soon blurs, and when Belphagor is imprisoned, the unexpected passion of Vasily warms her through the Russian winter.

Heaven seems a distant dream, but when Anazakia learns the truth behind the celestial coup, she will have to return to fight for the throne—even if it means saving the man who murdered everyone she loved. 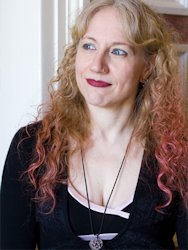 Jane Kindred began writing fantasy at age 12 in the wayback of a Plymouth Fury—which, as far as she recalls, never killed anyone…who didn’t have it coming. She spent her formative years ruining her eyes reading romance novels in the Tucson sun and watching Star Trek marathons in the dark. Although she was repeatedly urged to learn a marketable skill, she received a B.A. in Creative Writing anyway from the University of Arizona.

She now writes to the sound of San Francisco foghorns while two cats slowly but surely edge her off the side of the bed.

What:  One commenter will win his or her choice of an eBook of The Fallen Queen or The Midnight Court from Jane! [Note if you chose The Midnight Court you will not receive your eBook until on or after the August 30, 2012 publication date.]


What is one of your favorite traditions?
Please remember - if you don't answer the question your entry will not be counted.


There are a total of 3 entries you may receive: Comment (1 entry), Follower (+1 entry), and Facebook and/or Twitter (+ 1 entry). This is subject to change again in the future for future giveaways.

Who and When:  The contest is open to all humans on the planet earth with a mailing address. Contest ends at 11:59pm US Eastern Time on Friday, August 11, 2012. Void where prohibited by law. No purchase necessary. You must be 18 years old or older to enter.


*Giveaway rules are subject to change.*
Posted by Qwill at 8:41 AM