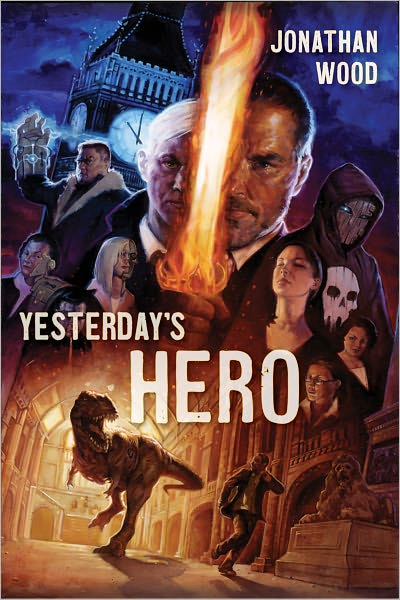 Another day. Another zombie T-Rex to put down. All part of the routine for Arthur Wallace and MI37—the government department devoted to defending Britain from threats magical, supernatural, extraterrestrial, and generally odd. Except a zombie T-Rex is only the first of the problems about to trample, slavering and roaring, through Arthur's life. Before he can say, “but didn't I save the world yesterday?” a new co-director at MI37 is threatening his job, middle-aged Russian cyborg wizards are threatening his life, and his coworkers are threatening his sanity.

As Arthur struggles to unravel a plot to re-enact the Chernobyl disaster in England's capital, he must not only battle foreign occult science but also struggle to keep the trust of his team. Events spiral out of control, friendships fray, and loyalties are tested to their breaking point.

I'm going to say this right up front: Yesterday's Hero is one of my favorite books of 2012. Why? Read on.

In the second book featuring Arthur Wallace, former Oxford (England) detective and now MI37 agent, Jonathan Wood has written a fantastical story complete with evil Russian wizards, a save the world scenario, a scintillating and fast-paced plot, and most important, characters that I care about deeply. Jonathan Wood made me cry... more than once. And I can't tell you why. Let's just say I became so heavily invested in the characters that I really felt for them.  I knew them from the first novel, No Hero, and got to know and understand them even more in Yesterday's Hero.

The staff of MI37 is a collection of highly quirky individuals, each very well-written. Even the secondary characters from the first novel feel like old friends in Yesterday's Hero. In addition, a new set of characters fighting against the bad guys alongside of, but not with, the MI37 agents is introduced. Each of these characters is fascinating. Finally on the supposed good guy side there is one character in Yesterday's Hero that I absolutely despised, loathed and hated. He was brilliantly written, thoroughly awful and I was hoping he'd met a grisly death. You'll have to read the novel to see what happens to him.

While Yesterday's Hero is chock full of action, there are moments when it is contemplative as well (sometimes in the midst of a lot of action). The story is told from Arthur's perspective so we are carried along on his train of thought throughout. Arthur is an unlikely hero, bumbling along at times, but always trying to do the right thing. Relying on his detective skills is never more important than in Yesterday's Hero.

The story itself is engrossing and nail-bitingly tense at times. However, it's not all gloom, doom and destruction. There are moments of humor throughout. Yesterday's Hero moves at a steady clip as Arthur tries to save the world... again.

Bottom Line:  Yesterday's Hero is a beautifully written fast-paced Urban Fantasy with an engrossing story and characters you'll love to love and even love to hate.


I give Yesterday's Hero 5 Qwills

While you don't have to read No Hero to enjoy Yesterday's Hero, you should read it anyway. You may also read my 4 1/2 Qwill review of No Hero by clicking here. 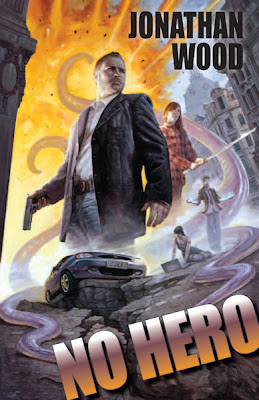 Night Shade books is proud to present the debut novel from Jonathan Wood, NO HERO.

"What would Kurt Russell do?"

Oxford police detective Arthur Wallace asks himself that question a lot. Because Arthur is no hero. He's a good cop, but prefers that action and heroics remain on the screen, safely performed by professionals.

But then, secretive government agency MI37 comes calling, hoping to recruit Arthur in their struggle against the tentacled horrors from another dimension known as the Progeny. But Arthur is NO HERO.

Can an everyman stand against sanity-ripping cosmic horrors?